If you had to relocate what state would you move to?

Ok, gonna update this now with new stuff. Idaho is the winner, which surprises NO ONE HERE.

I’ll attach images of the final areas we’ve decide on based on several factors below. Right now the Coeur d’Alene and surrounding area are tops on our list (the first image). The are north and northeast of Boise is a close second and would only be seriously considered over CDA (Coeur d’Alene) if the job I find pays more and the land is larger without breaking the bank. The other factor is our business we will end up embarking on once we get settled and that would do better around CDA me thinks. Still doing research on that one… I’ve been at this research for years and we are getting close. Our equity in our current home has gone back up so we already at the moment have another ~$85k in equity as I type this. In a year or two when we sell we’ll be likely looking at $100k+. Unless Joe Biden crashes the economy…

What we’re looking for in a property in case anyone is curious. 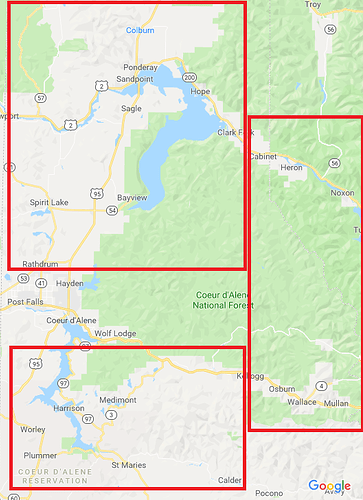 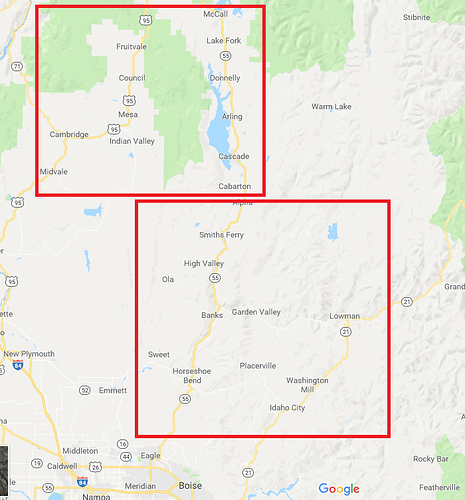 My wife and I live in Texas and we are currently deciding where we are going to relocate to. Our choices are, in order of choice, below.

Update Sept 2018
Here are the areas of interest my wife and I have settled on based on some factors. 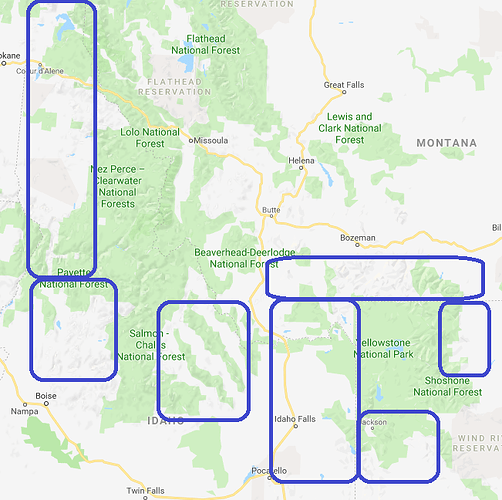 I have friends that live in Utah and friends that hunt in Montana. I could live in either place. I wouldn’t mind trading the piney woods for some snow and big game hunts. Just give me a cabin and a wood burning stove, I’m happy!
I don’t know anything about Idaho.
My brother in law is from Phoenix… crazy hot! I dont know what the northern part is like but, I have enough heat here in Tejas.
Although, i would miss the real Mexican food.

Curious, why the disdain for Texas?

Idaho is quite nice, a bunch of people from Texas move there. The northern part of Arizona is nice too, not stupid hot like Phoenix or even here in Texas.

As for why, I’ll summarize to follow my own rules. Haha. Here are most of the reasons.

-Too hot.
-Has very little natural beauty (aka mountains). Alpine is it and there are only a few real mountains. Oh and it’s still hot there.
-Getting expensive. Land is getting too expensive here and since we want 40+ acres it’ll be very expensive here even if we wanted to be here.
-Too many transplants from CA and the northeast.
-The aforementioned transplants bringing their politics with them.
-Did I mention the heat?
-Want to be closer to wife’s family in CA.
-Schools here aren’t really very good.

Well, I can’t disagree with any of that except for the schools. Granted, we got lucky but Cy-fair is pretty good as far as public schools go. They even have a bring a veteran to school day on Veterans day (In elementary).
Definitely expensive property. Even out in the sticks. I’ve seen property purchased at $150K end up tax valued at $500K a couple years later.
Once my daughter is out on her own, I’m heading for colder climate myself.

And since we have some of the higest property taxes in the country that gets pretty significant.

Wyoming because it feels the most American or Texas just because I like the vibe down there and I also like going out in the desert to cook eggs on rocks.

I think I will just stay here in the Ozarks .Land is still cheap taxes fair and I can hunt and fish any thing here for less than $200 a year.

I lived in Montana when I was in the USAF in the 80’s and absolutely loved it there. Hope to convince my wife to consider moving there after we both retire.

Also loved Texas, Wyoming along with hunting & fishing in the Ozarks. I’ve worked in every state throughout our country over the years with the exception of Alaska and Hawaii. Born and raised in the Adirondacks of NY through the 60s & 70s. Currently live in Southern Ohio near my wife’s family. I also have two sons attending college nearby. One will be graduating next year and the other a few more after that. Hopefully in about 5 -10 years, I’ll be back living in “Big Sky Country” again. We’ll see…

Yellowstone with the Snake River and the Grand Tetons in the background; 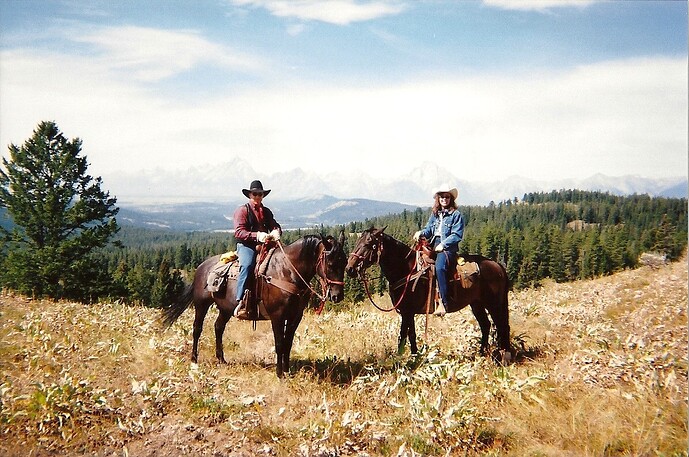 AZ man, hands down! Just don’t go to the Phoenix Metro area due to the hideous air pollution. Look for the surrounding municipalities such as Fountain Hills or Carefree, both of which have good air quality.

I would not recommend the far Northern part of the State though because of the nuclear fallout cloud from the Nevada test sites. There’s an increased cancer risk (as with Utah).

But anyway, AZ overall is awesome for many reasons!

I’m located overseas for some time to come due to work, but I will want to move to AZ most definitely. Move to AZ man, you’ll forget about TX in a heartbeat I guarantee you that. If a job awaites you and you got a place to crash, move yesterday!

I have land in the Savannah, TN area and plan on spending retirement there, a small homestead to keep me busy. Plenty of Hunting and Fishing…

If I did I think I would go to Wyoming.

Im in wa looking at mont.,to get farther from lib bs already live in remote location!
But to close to ,them.got two rules for house hunting,gotta be able to piss off ,and shoot off the porch!and the difference between zero and 30below cold is just cold!

someplace warm. too cold in Wisconsin

Great topic and lots of helpful info on here. I, too, live in Texas and really like it. I love how 2A friendly it is, although I know there are states like AZ that are even more 2A friendly. But like others have said, it is quickly becoming more and more expensive, especially land and the housing market.

Having grown up in a military family, I don’t really have a “hometown” and have moved around all my life. Longest time I’ve ever lived in one state has been Texas, with Florida being second. So I’m used to sweating in the heat and humidity and used to mosquitoes bites, but will never get used to chigger bites and poison ivy, which the DFW area has a lot of!

Interesting how the OP’s list of states is similar to one I might make - they all have cooler, drier climates and great scenery. Also interesting to hear from Arizonans on here about the nuclear fallout and cancer risk associated with northern AZ. Good to know. I was thinking of northern AZ mainly because I assumed it has a cooler climate than the southern portion of AZ. I’ve lived in the Imperial Valley of CA, about an hour West of Yuma. Beautiful desert scenery and perfect Spring, Fall and Winter weather. But the summers were brutal. It may have been a dry heat, but 120* high temps just feel like you opened the oven door! A/C units and car radiators constantly failed under extreme heat like that. I don’t know if the rest of southern AZ is like that, but I never got used to that kind of life and death heat during the summers I spent in that desert heat just West of Yuma.

Montana looks beautiful, just don’t know if I’m tough enough for its winters. Same with Alaska. Colorado also looks and sounds like a great state, but other than the few visits I’ve had there, I don’t know how expensive it is to live there nor am I too sure about its laws concerning 2A.

Sounds very nice, rjburk. Where in Tennessee is Savannah?

Move to AZ man, you’ll forget about TX in a heartbeat I

I know Idaho and Montana would do that as would Wyoming (if WY had jobs). We’d only be interested in say the Williams/Flagstaff area and farther north or northwest in AZ. I personally want nothing to do with the heat. I get that stuff here an I’m sick of it.

Employment will likely determine where we end up, though Idaho is my personal choice.

Montana looks beautiful, just don’t know if I’m tough enough for its winters. Same with Alaska. Colorado also looks and sounds like a great state, but other than the few visits I’ve had there, I don’t know how expensive it is to live there nor am I too sure about its laws concerning 2A.

If you choose the right area of Montana the weather isn’t that much different than Idaho or Colorado. The Missoula area is a nice area with tolerable weather for Texans assuming your not one of those who cannot take say 50 degrees Fahrenheit. Because said person won’t last long to there.

FYI, There are a bunch of Texans that relocate to Idaho. So they just know something we don’t.

It really sounds like this is a fantastic place.

As for Colorado, unfortunately that state is off our list. While the western side of the Rockies are conservative. Problem is the east has the liberal high population strongholds which means the left rules that state and they are anti-gun. It really is too bad because the area around Montrose, Grand Junction, Hotchkiss, and the surrounding areas are quite stunning and don’t have a premium to live there. Unfortunately since it is a very blue state and they hate the 2A I just cannot consider it. I did some diligent research on all of these western states and it saddens me that Colorado is so ruined by the democrats because it meets all of our criteria.

Idaho is pretty conservative, I live in Northeast Oregon about 3 hours or so from Boise and its a pretty decent area ,better then Colorado,Oregon,Washington,Cali or Nevada (IMO) but not as nice as Montana or Utah but I would still prefer Texas just so I could justify wearing one of them big snazzy belt buckles without sticking out too much.

Flagstaff is ok. Good luck finding a job though as most of the employment there is tourism related. Nothing there for a post-grad.

Idaho is very cold, very conservative (too conservative if you ask me), pretty backwards and full of neo Nazi’s and other Alt Right nut jobs. I’d be very careful what you wish for. But hey, that’s just my $0.02 man. I don’t know what you do for a living, but if you’re a skilled technician you might want to apply for a job at PWS! They make the best AR-15 on the market. I’d be proud to work there… Very proud.

Perhaps you might want to consider the Ozark region? I’ts really beautiful there and cost of living is laughable. Downsides are the relative isolation, the fact that AR is not a SYG State and the humidity. There are distinctively four seasons though.

I recommend the two of you look up Sperling’s Best Places and City-Data.com Those are excellent web sites with tons of info on virtually all States. Each State has its pros and cons, still, I think AZ ranks top though and I don’t see any real downsides, maybe the lack of a coastline but you don’t really need it because everybody has a pool.

Savannah is a good 2 hours East of Memphis, close to Pickwick Lake…