Incapacitation rates of different calibers based on 1,700+ incidents 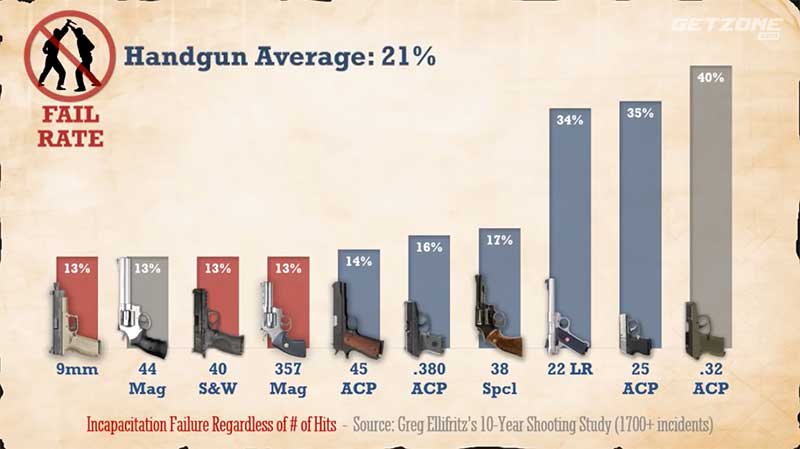 I say it all the time. Data is important in defending the 2nd Amendment and it is important when creating our self defense strategy.

People like to say, “the best gun is the gun you have with you.” While there is a ring of truth to it, we can pick our guns beforehand. So why pick a sub par gun when you can just as easily pick a better gun?

So why pick a sub par gun when you can just as easily pick a better gun?

While I generally agree with you, I believe the #1 reason for the quote above is $$$. It isn’t hard to assume the likelihood of said person being in a bad / poor neighborhood seeing as most crime is in those areas these people may not be able to afford much.

I believe the #1 reason for the quote above is $$$

Oh I agree completely. My Canik TP9DA was $373 which was a fantastic price for a quality 9mm. What I was getting at is some people may inherit or buy ultra cheap at a pawn shop something much cheaper (or free if inherited). In my personal opinion for home defense if you cannot afford a $300+ handgun buy a shotgun.

I guess there are “studies” that can PROVE that this gun or that is the best/worst for self defense. I saw one that was supposed to have been done by someone that went to ERs and surveyed gun shot victims. He was looking to see which caliber took the person out of the fight with one shot. His figures showed the 22lr as the best. It was presented as sort of a best knock-down caliber comparison, but his description of knock down was taking the person out of the fight. I can see his reasoning there. His study spanned several years and tens of thousands of victims. It wasn’t done on percentages, so even though those shot with a 44 mag were taken down, there just weren’t that many.

if you cannot afford a $300+ handgun buy a shotgun.

as a defensive gun the choice should be a AR 15 rifle style and not a shotgun - at one time in my life I would have said 100% shotgun but the AR style is just so much easier to shoot by the whole family and not as loud with the ability to engage with a second / multiple round(s).

Unfortunately the chart has a crapload of variables that could affect the outcome.
Incapacitation is a somewhat ambiguous term too.
The human or animal rarely dies by bleeding out.
Shock is the killer and the stopper.
Shock the body enough that it cannot compensate and it will shut down.
That is the main reason a shotgun is effective.
You overwhelm the bodies ability to compensate for the trauma it has suffered and it starts to shutdown non essential or less essential systems to attempt to maintain life sustaining functions.
More shock and damage to deal with.
When people die you see the same thing.
Their appendages get cold (Constricting Blood-flow) to ensure blood is delivered to essential systems.
Body functions fall off one by one till the body can no longer sustain itself.
Then heart rate and breathing fall off (Final Gasp) and the brain is starved and a person passes.

Incapacitation is a somewhat ambiguous term too.

Not really. It means the fight stopped because the criminal was physically not capable of doing so or because he gave up.

Incapacitated is the main thing we want to know.

If he was talking to people in the ER then he didn’t count the ones in the morgue. The ones .in the morgue were taken out of the fight too.

If I need to take charge.
I want them DECEASED!!!

Just Sayin…
Its all good info and stuff you will never hear otherwise.

as a defensive gun the choice should be a AR 15

Not cheap enough. Remember in my scenario we are talking about poor people who cannot buy a $300 9mm handgun. So an AR just won’t fit that poor person’s budget. A shotgun however will. A Mossberg Maverick 88 is ~$200 and plenty good enough with buckshot or slugs to do the job if said person is on a budget / limited income.

at less than $200 why the hate for HiPoint or are you claiming for all demographics / legalities?

Was that directed at me? If so, I don’t hate Hi-Point and I have no agenda or narrative regarding demographics. I happen to own a Hi-Point pistol caliber carbine in 9mm and love it to death because it has been super reliable and accurate for me. If I had a choice and I was poor I’d grab that Mossberg Maverick 88 shotgun for $200 (or less on sale) and be content until I could afford to buy a Canik or similar 9mm tupperware pistol or even the aforementioned Hi-Point PCC for ~$250-275. As long as you get some good training and range time in with that shotgun you should only need 1 shot to stop the threat with a slug or buckshot.

The other side of this is if we add in pre-owned / used firearms and really do put this scenario in my shoes and I was poor, you all know what I would actually buy.

I just was taking my bias out of the equation and being objective. In reality in my world a

is the easy choice.

like I said the shotgun should be the second choice over a for example Hipoint pistol. Something that I have learned and does involve changing my mindset, but shotguns are hard to use. They do not have the magically ability to hit everything in the room, they are loud (which could be a good thing if you miss), and with a Mossi 88 there is a good chance you would not be able to get off a second shot (recoil and short stroking come to mind). A shotgun that fits my body, the wife can shoot but takes a lot of effort on her part, and daughter can but with a lot of difficulty. They are unwieldy and would be almost impossible to use when “hiding” and even harder to use to clear if on the offense. But by just racking the slide (hollywood load) your intentions are broadcasted loud and clear.

I’m with you on the recoil and unwieldy nature of shotguns. I figure that’s a price to pay for having limited funds. The short stroking it and such can be something you can overcome with the training and range time I mentioned.

Make no mistake though, we do have options for that price point new and used so said person can definitely find something more to their liking so even the poor can make sure to be prepared and feel protected (assuming they train with it). If they want to use a Hi-Point C9 then more power to them, they just need to train with anything they end up getting.

I still think a

is the winner. Haha.

Mossburg Shockwave, Aguila minishells and opsole miniclip = everyone can use a 12 gauge.

Something that I have learned and does involve changing my mindset, but shotguns are hard to use.

They’re heavy, long, and require skill to use - especially when engaging multiple targets. They also have a very low capacity and slow fire rate (if you have a cheap pump).

Completely agree that shotguns are marketed as a defensive gun for non gun enthusiasts but they really are a more advanced weapon.

Mossburg Shockwave, Aguila minishells and opsole miniclip = everyone can use a 12 gauge.

I very very much disagree with using the Shockwave as a defensive gun. They require an even higher skill level of skill than regular pump shotguns.

The Shockwave, and other pistol grip only shotguns, are a poor choice for a defensive firearm.

I am an advocate for simple weapon systems. I agree fully that in general a full sized shotgun is a great home defense weapon.
I feel that I need to critique this a bit, most everyone wants to treat the Shockwave as a shotgun and expect to use it the same way you would a shotgun.
I would offer the following counterpoint. It is not a shotgun… Different techniques are required to use it effectively much in the same way you would use different techniques with a pistol, rifle ect…
If you train to use the Shockwave the same way you would a shotgun it will be miserable as again its not a shotgun. If you learn to use it along the lines of its design it will make a fabulous home defense weapon with skillful usage. I will make a video demonstrating this, Tomorrow or Saturday. Additionally I will compare and contrast the techniques.

and for me I found those to be very unreliable in my 590a, or my M5 (both share the same “style” of elevator). I know there are those lifter plugs that are suppose help but takes away using full size shells

problem solved.
It takes like 1 second to remove it if needed.