Just how do you shoot your foot like that?

Yep, we covered this in our podcast last night, among many other things. We had a blast. 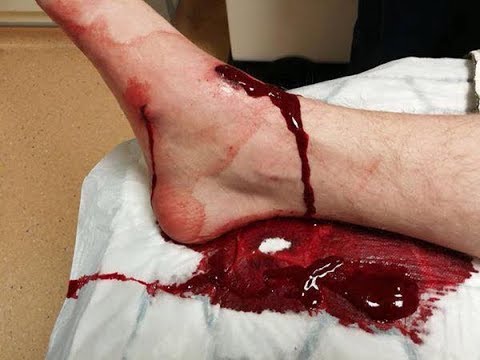 Multistreaming with https://restream.io/ Tonight we talk about the Redding T7 turret press, Defend-tek.com and how do you shoot your foot like that? Join us every Thursday night at 6pm central time for our weekly updat

no different than tacticool cops or wanna be operators that shoot themselve in the knee, leg, foot or partners because they strap a rifle to their chest and reverse port it all the while hand on the grip

In the case of this guy, he had his finger on the trigger while he holstered it, then blamed the holster for his own mistake.

Keep your booger hook off the bang switch!

I have a neighbor that took the meat off his toes with a shoot gun using bean bag rounds. At point blank range they are crushing! Maintaining good trigger control and not becoming complacent is obviously important with all firearms.

When I was going through training, we had a guy plant a round through his foot while on the rifle range. Drill was “look, turn, raise, shoot”, where you are starting 90 degrees from your target. Unfortunately, this winner did “look, shoot” and shot clean through his boot and foot.

Or you can do it the way a neighbor of mine did. You know how males are born with the DNA that says that we all know how to handle guns just because we’re males? Yeah, I don’t either. But this guy was/is an asshole anyway and he had that nonexistent DNA, at least until he realized that he didn’t.

Too, as Americans if we can buy something we automatically know how to use it. Heck, not only that, but we’re immediately experts with what we have the ability to buy. You know that magic ability? Yeah, neither do I.

Well, he bought himself a .22 handgun and anyone with a lick of sense knows how easy they are to swing around. Observing absolutely no muzzle discipline he pointed the gun down and at his foot, I assume finger on the trigger, and put a bullet through his foot. I heard about it when he came over and in an accusatory tone, as though I had something to do with it, told me he shot himself. Maybe by my safe gun handling over the years I somehow got him to think it was something he could also do with no training or brains involved.

There’s a reason a childs first gun is a .22 single shot rifle. Some children are chronologically much older and should start with the same firearm. Some children, no matter their age, shouldn’t have firearms because they can’t respect them and don’t have brains enough to get safety training.

That’s one way to put a bullet through the foot.

I think the world became a safer place after that foot shot incident because I don’t think he has it anymore.