Lets talk about keeping your rifle running long term. Anything in particular that you guys stock up on or would do to keep your “goto” rifle going if shtf (or even if a ban happens)?

Heres a neat article on the subject to kick this discussion off.

"AR-15 vs. AK-47. 7.62 vs 5.56. 308!! Mil-spec, mil-surp, match grade, green tip, etc, etc, etc. If you’ve been a shooter any amount of time, you’re familiar with these terms. In the internet-land these are hotly debated for some reason, each time by people who’ll no doubt prove this time around that their choice is the right choice, yours is not if you disagree, and whatever they’ve bought is by default the best ( because they say so of course, along with it’s high price if talking among champagne elitists or it’s budget price if talking with the buildabag crowd ) and every so often it’ll get backed up by unverifiable claims of “ someone they know/trained with/watched a DVD of/thought lovingly about once who’s a no-crap SHTF ninja – type baddie ” told them it’s what they run…

Yeah, Right. The overwhelming bulk of these people have never fired a shot in anger. Being a gun enthusiast doesn’t make one combat proficient. Pardon me for my genuine disinterest in their ‘opinions’.

What you very rarely hear is discussions about keeping your weapon running, long term. I guess that’s not ninja-enough. Believe it or not, it has little to do with weapon selection itself- it’s a question of logistics. Each of the common platforms have nuances, big and small, that need attention to keep your weapon from being deadlined. Nothing is worse that spending a month or more’s wage on a defensive rifle, an optic, mags and ammo, to have the weapon fail due to a dead trigger spring. It happens. It happened to an SR-25 I was running on a Known Distance ( KD ) range. Great rifle, but not widely known for its reliability. Even the Kalashnikov, the alleged marquee of reliability, has needs and can fail fairly easily and unexpectedly, especially with some of the lesser-quality brands out there. So all this being said, here’s a few guidelines to follow in order to keep your weapon running, post unpleasant-ness:

Standards matter. It’s not really about whatever your particular preference may be, or even what weapon is better for this or that, it’s about what the group can acquire, standardize upon, proficiently employ, and keep running long-term. In the US that favors the AR-15 the strongest. There are no guerrilla forces I can think of off-hand that simply picked what they wanted, either- it boils down to what the external support supplies them with or is expropriated ( but this, of course, is another discussion for another day ). So while that may or may not be your concern, creating a standard for your group, adhering to it, training around it’s strengths and limitations, and having a plan to keep those weapons running is critical to your success.

Next I want to get up to 5 of all of those parts and 20 sets of gas rings, then 3 extra bolts, 5 buffer kits and an additional 3 buffer springs.

Honestly imo if you have multiple rifles of the same design one can never have to many parts.
That’s just the prepper in me

Good stuff. It’s one of the reasons why I always recommend the vanilla AR-15 in .223 to everyone who doesn’t have one.

There’s nothing wrong with the more unique firearms, but IMO those shouldn’t be acquired until after you have an AR-15. 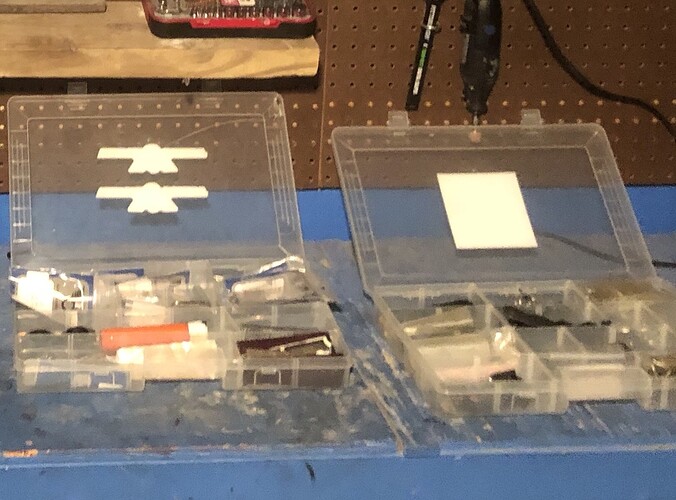 33 posts were split to a new topic: Quality vs junk AR15 parts

“Home built” issues also come from people not checking headspace, not torquing the barrel nut down to the right spec and out of spec cheap parts. Im not a smith but know a little about the AR platform and have helped a few people fix their fuck ups.

Have you ever considered keeping round counts on specific brands and parts then possibly starting an article on it like Henderson Defense does for his rental range over on AR15.com?

We already do… but that’s at the shop. We have a box full of take off parts with round count to failure on them. We even keep failed parts on the counter to show people. We ask if they can see what is wrong with the parts. Failed bolt carrier is the one that gets most people.

LMT is a great company. Love there stuff really. I sometimes forget about them… hahhahaa
We have a LWRC BCG running in a machine gun at the range, I think it is up to 18K now… not sure.
Mine only have a few k on them, but i also Cerakote my BC to make it wear better.

That sounds like a pretty neat idea, actually. Do you cerakote the actual bolt too?

Everyone who posted previously pretty much summed it up. Keeping the main “wear and tear” parts on hand including spare BCGs, springs, pins, extractors and firing pins I think are the most essential. There’s really no need to have multiple trigger sets or furniture items (forends, grips, stocks, etc) as those typically aren’t going to be breaking or getting worn to the point of needing replacement. Although having one or two doesn’t hurt.

I remember after both the Aurora and Sandy Hook shootings, places like Cheaper Than Dirt were selling PMAGs for $75 a piece or any BCG (commercial, not even milspec) for $350 each. There weren’t the only place that did this, and there are those of us that will never forget.

This also brings up the point of having enough good quality magazines and ammunition. Especially since magazines are consumable items and will eventually wear out and need to be replaced. I think it’s best to buy a couple here and there when needed versus reacting to an event which will eventually cause a shortage as there will always be people who hoard it.

And these typically are the non-gun people who at every chance of a potential ban, go out and clear the shelves. Folks like us who have been shooting since day one know better. Of course every once in awhile you come across a good sale or special that can’t be ignored.

Only part of the bolt. Not the face of course. But yes, we spray everything. People sometimes think we take off the nickel boron but we do not. We just coat over the top of it. Make it last as long as possible and keep it easier to clean.

Excellent article and I agree with it to a tee. That right there though will be a friction point among the American gun community. As Americans we like to have choice and enjoy being different. With that comes the AK vs AR vs CETME/HK vs DI vs Gas Piston vs Delayed Roller Lock vs etc, etc, etc.

If folks are going to be honest with themselves when reading this article and want to own a “weapon system” that will be long term and easily maintained with easy to get parts, then the AR is the clear winner.

Now some are close, but none meet the ease of the AR platform.

When it comes to quality, many have already been listed. Spikes, LMT, LWRC, BCM, DD, AP, CMMG, and the list easily goes on. One only has to do a little research.

When it comes to the AR I’m a firm believer in the DI platform and keeping it as “mil-spec” as possible. Is this a knock against gas pistons? Not at all. I own piston guns and enjoy them. My favorite is my Faxon, which is a hybrid AR/AK, but when it comes to parts it is expensive and except for a couple of parts has no commonality with either the AK or AR.

So when I think long term and maintenance then my go to rifles are my M4 clone and MK12 clone. Simple DI rifles with easy DI gas system that are simple to maintain, BCGs that are easy to maintain, FCGs easy to maintain, and barrels easily replaced with a breaker bar, tongue wrench, vise and block.

So simple a cave man can do it.

A good informative article. For my AR10’s I picked up the complete AR10 field repair kit. The former Armalite Master Armorer consulted with a lot of people to develop that kit and did a great job for that specific firearm. I will be looking for some comparable kits for my other rifles now.

2 posts were split to a new topic: Armalite vs DPMS pattern AR10s

It’s a bit diffrent for me then most people in ways
I don’t really go out to eat or Starbucks or fancy clothes watches jewelry things of that nature
If I have a extra 60 bucks I’d rather buy a part/parts or magazines with that you’d be suprised how fast they add up
Later on I may decide not to use it so I’ll eother keep it or list it in a market place or sell it to someone I’m doing work for and get my cash back out of it
It helps when you want to build something as well and you can say I have this I have that all I need is this
Just my .02 on how I acquire parts