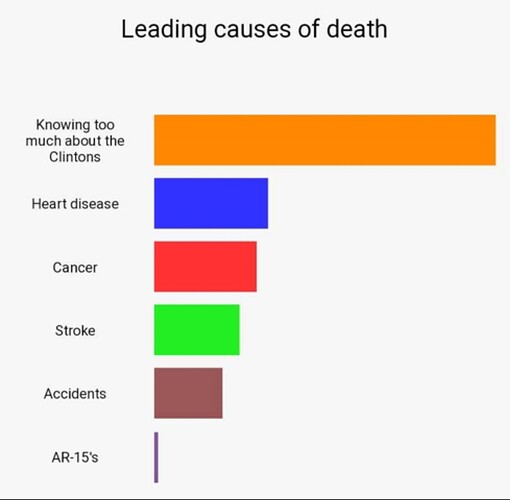 I was going to guess stupidity

The number one cause of death is birth. Clintons are a close second.

Reminds me of some old Iron Maiden lyrics, “as soon as you’re born, you’re dying”

Good health is just the slowest rate of dieing.

“Death is just the beginning” is more my way of thinking. I highly doubt if there is a god that this life is “it.” I believe in god though, I just struggle with organized religion, to each their own though.

Leading cause of death: dying.

Well, organized religion has caused alot of death so its not technically off topic yet.

I was gonna say that but I decided not to as to not upset the religious folks here.

The AH in me wants to reply that the leading cause of death is life. Now that that is out of the way, one not mentioned much is hospitals. I know it is WAY up on the list.

I blame women ever since we let them out of the kitchens its all went downhill… coincidence?

Im going to write up a 1000 word essay on this then present to Moms demand action.

250,000 U.S. deaths per year attributed to medical “errors”…and there’s no one screaming about it.

That is equivalent to about 14 Sandy Hook massacres…every single year. Where’s the outrage from the Left? Why are they not banning residential swimming pools?

Why are they not banning residential swimming pools?

Or stupid parents whom don’t supervise their kids