Learning From a Failed Project.

I could not find an, “Additive Manufacturing” section on the board, so I put this thread here.

Sometimes, despite our best efforts, a project does not come out the way that we had hoped it would. A lot of those times, I use material from the failed project as an opportunity to try out new techniques that I would not want to attempt otherwise. I learn a lot from failure. My number one golden rule is to, “Always Practice on Scrap!”

I had a print that absolutely failed about halfway in. 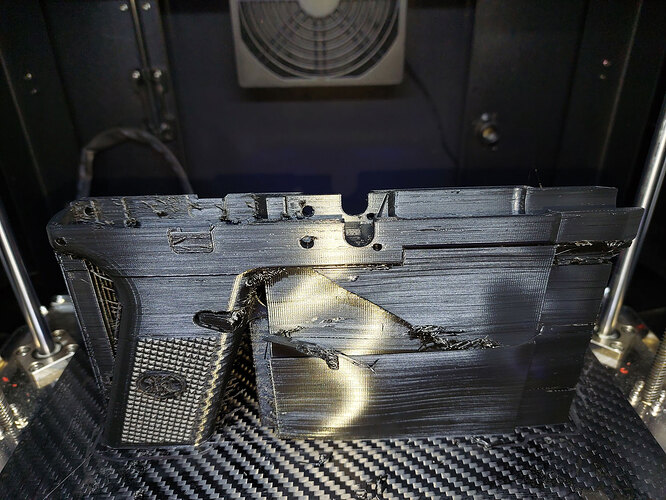 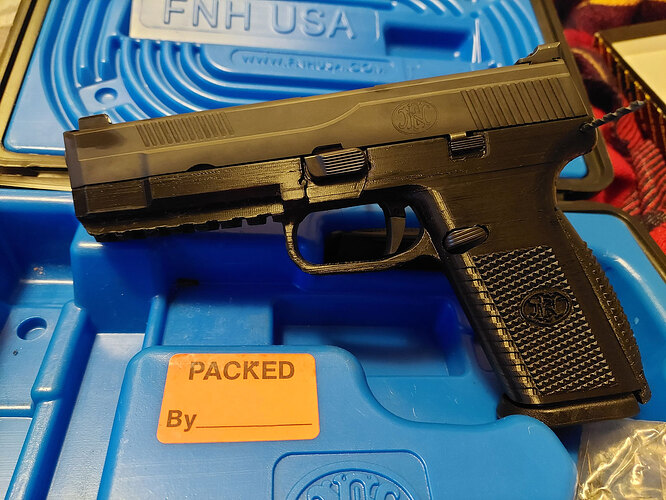 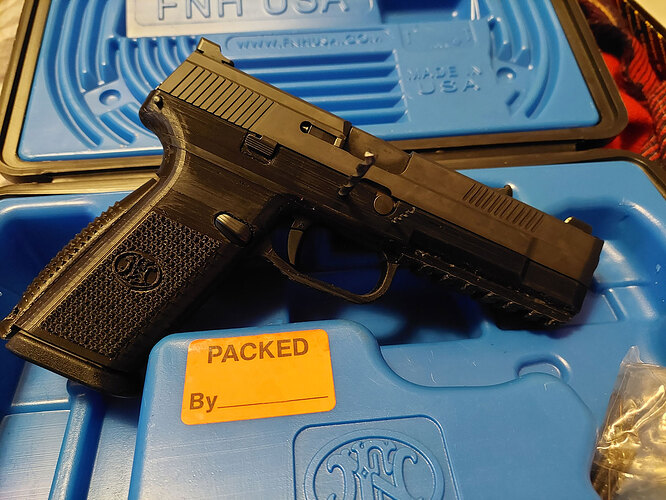 Once I got all of the measurements that I needed to correct the model, I decided to try some filler and Cerakote to see if future prints could benefit form ether. The material that I printed in is called, “Polymaker PolyMax Polycarbonate.” The manual that I received for the filament suggest “annealing” it at 100 °C (212 °F) to “stress relieve” it. Some oven treated Cerakote can be set between 200-300 °F, so I thought that I’d see if the polycarbonate could handle the low 200s… it can not! 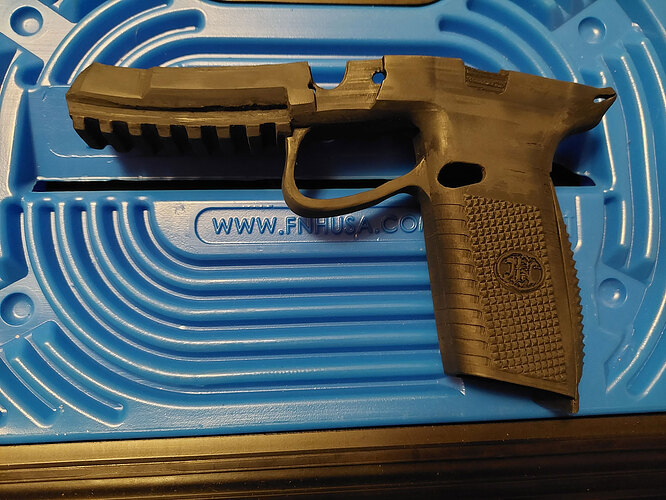 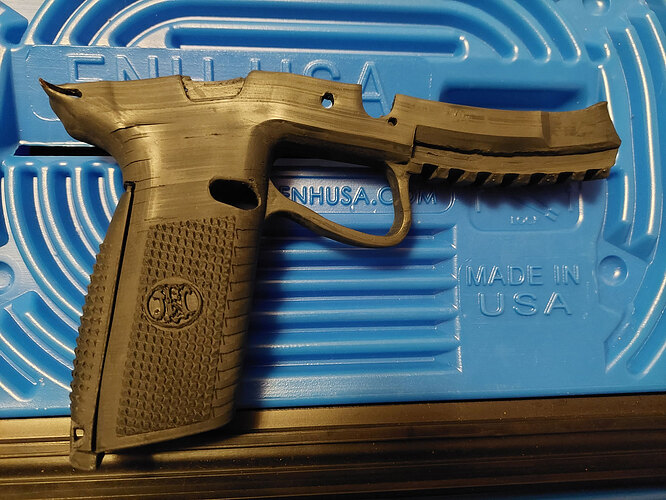 I would have been livid had I tried this with a good print.

On the plus side, I learned that West Systems, G/Flex, two part epoxy works well as filler material for Polymaker PolyMax Polycarbonate. I wouldn’t use it to hold something structurally, but it works well as filler material. I also noticed that where ever i used it as a thin surface layer to fill in minor layer separation, it prevented splitting when heat distorted the frame. In the areas with no G/Flex, the layer separation cracked the frame badly with the heat distortion.

failed about halfway in.

What went wrong, do you know?

What went wrong, do you know?

The supports were not wide enough (with the height of the print) and I was getting print separation from the bed. I can’t get polycarbonate to work well for me in Cura for some reason, so I used Simplify 3D. Cura has much better support and raft options, like tree supports and such.

How much time and money was used for that particular lesson?

It is super exciting to see what these printers are capable of.

How much time and money was used for that particular lesson?

The whole project comes in at less than $200, because the FNS part kits were being sold for $150 from CDNN before the files dropped. I had a heads-up on the project because I was part of the beta testing and file re-mix group. I will be printing another frame soon. The prints themselves only cost a few dollars (like, $3.00-$5.00) per print, so you can screw them up a number of times before you start to feel it in the pocket book. The time it takes to print them is another matter, but you don’t have to be there while it’s printing.

It is super exciting to see what these printers are capable of.

It’s not just receivers. I’m also printing all the jigs that I need to finish my HK51 project. I also use my 3D printer to prototype. I need an HK A3 Locking Ring, which HK does not sale anymore, so I 3D printed one by scaling it off of pictures that I found on-line and plugging in measurements from mating parts. It works really well, so now I’ll make one out of steel.

Have you done or thought about doing any lost PLA casting?

Have you done or thought about doing any lost PLA casting?

I’ve thought about it. I have all the stuff for it. It’s the next logical progression. 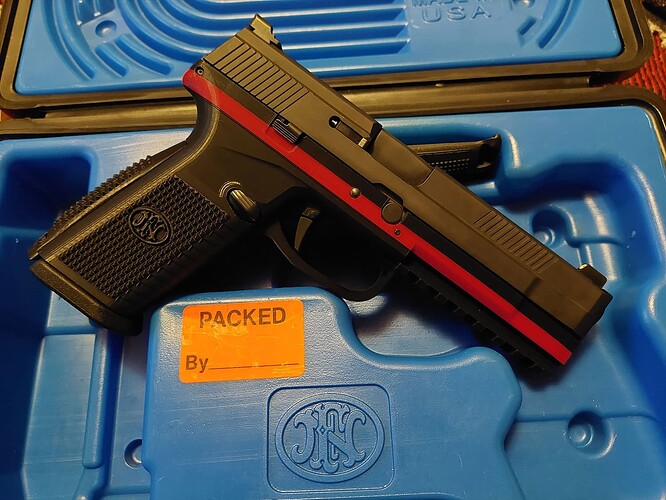 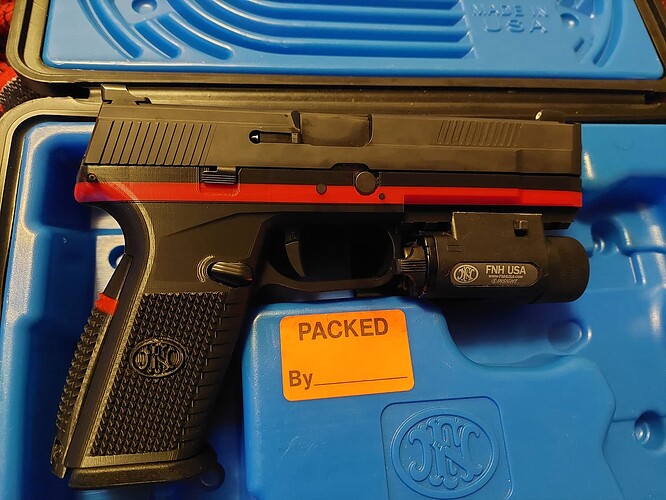 Whats with the red lines?

I think he bought it. The red are the ‘Seals’. The ‘progress’ is attached to the rail. Kind of threw me too, til I saw the FN logo.

I saw the FN logo

Hey, with a printer, and a will 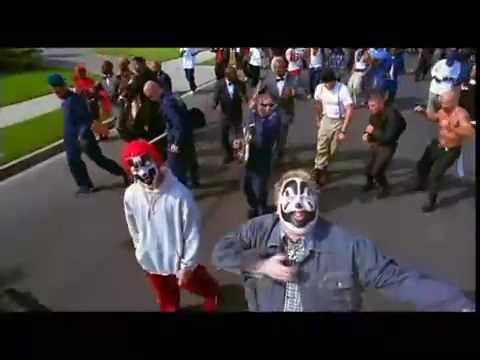 I’ve never bought a new FN, didn’t know they felt the need to seal them

I never have either. Well except for my Brownings years ago. They were so long ago they came in a cardboard box. One of the sons had a FN thing for awhile. He had 2 and sold them eventually.

Yes, here’s a pic of the frame while it was printing. 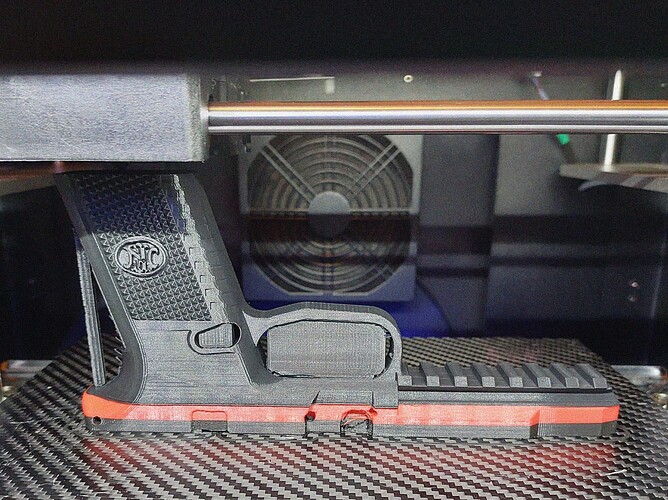 Whats with the red lines?

I fell asleep around the time that I needed to change out the filament. I have a cheap printer that does not stop the machine when you run out. It will just keep running the program with no filament. When I woke up, the filament was almost gone. I had to do a hot swap real quick. Red was the closest open box of filament that I had, so I went with that until I could get my next box of black open. I will probably paint it later.

I think he bought it. The red are the ‘Seals’. The ‘progress’ is attached to the rail. Kind of threw me too, til I saw the FN logo.

What are you talking about? No, seriously??? What “Seal?”

I have a cheap printer

I can’t even imagine what that means, but it’s awesome as hell you can do that

I have a cheap printer

I can’t even imagine what that means, but it’s awesome as hell you can do that

Cheap printers go for less than $250 at the time of this writing. They tend not to have all the bells-and-whistles of the more expensive printers, but they can still do a good job.

Does ink kill you, cost wise?

Does ink kill you, cost wise?

Filament prices depend on what material you print with. One kilogram of PLA can go for (at the time of this writing) for around $20. Polycarbonate is more pricey.

One kilogram of filament can last a long time if you don’t print a bunch of huge projects back-to-back.

May be wise to stock up on them