Let the hate mail begin. We talk about George Floyd with a cop...

We have a law enforcement officer on the show to discuss police restraint techniques and the details of the George Floyd incident. Definitely check this episode out.

The George Floyd Situation by Covering Fire • A podcast on Anchor

We talk to a police officer about control and restraint techniques used by law enforcement and the details of the recent death of George Floyd.

Wow, long pause, I had forgot I clicked it then bam, twilight zone hit me

There isn’t a long pause.

I didn’t say it was your fault

The trial is going, its a good time to revive a topic. There has been some surprising things. Like the Chief of Police committing perjury. I can’t figure that out, he had to know they would show what policy is.

And in testimony, the prosecution moved the goal posts. He put his knee across his shoulders, back and neck. I was told he stood on his neck for 9 minutes. I disagree with all of it, just hog tie him when he is violent and won’t cooperate. Here is the screen shot from the trial, Stephen Crowder was happy to risk suspension and show it.Minneapolis policy and its demonstration. I guess the Chief will willingly lie because Minnesota Democrats (Democrats in general) don’t prosecute fellow leftists without a good angle to promote. 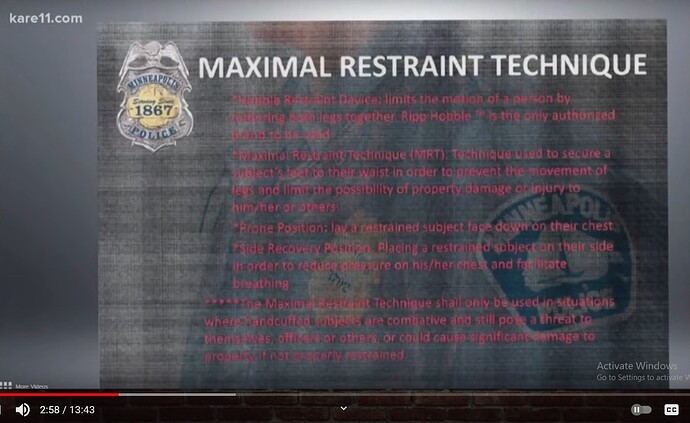 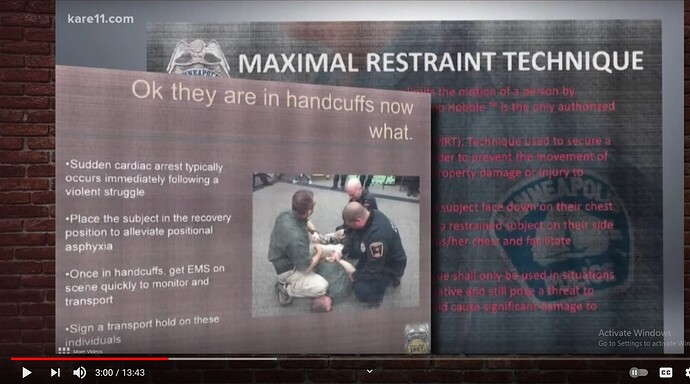 Floyd was a POS that got what he deserved, he should have been shot long ago. then maybe the women he robbed and raped would not have happened.

My opinion is they should give the guy that killed his ass a medal.

Seems plenty of “reasonable doubt” on G F’s godification.
Hope one juror has the balls to stand tall against the loons.
Wouldn’t doubt it’s all a hollyweird engineered show like the last year of rat act outs.

I’m waiting for the MEs report to come into evidence. The word I had months ago was that Floyd died of a fentanyl OD. But they have to put on a show and work everybody up for when Chauvin is found not guilty. I think they want clear sides to be drawn up.

And when the verdict comes in, let the games begin!

They not going to let that guy go, ain’t happenin. Kinda like they found OJ guilty.

You’re probably right, but it only takes one to turn him loose. If the glove don’t fit, you must acquit.

No matter what happens, you can count on a run on liquor stores, Walmarts, and any place that sells sneakers. I will take bets at 2 to 1.

you can count on a run on liquor stores, Walmarts, and any place that sells sneakers. I will take bets at 2 to 1.

That’s exactly why they are not letting him go. Them SOB will tear up shit no matter what the outcome.

But they have to put on a show and work everybody up for when Chauvin is found not guilty.

Yep, I think he will walk and just like all the other similar operations, instant excuse for riots. Standard fare for the COINTELPRO outfit, and this was so clearly a COINTELPRO operation, the principals involved maybe not but the event was recognized and capitalized on by the pros immediately.

I hope he has a fair jury. 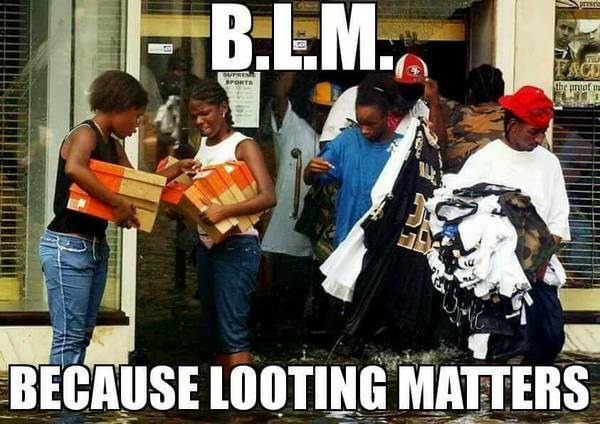 The “pay for view” would be awesome.

I’m sure he’ll be found guilty. Not sure he shouldn’t either. I don’t support BLM at all but I don’t think what this guy did was right. There are truly some cops that push the limit of the law and I believe he was one.

I personally know a guy that’s a cop and knew him his whole life. He’s a complete ass hole. He was as a kid and still is to this day. Got in tons of fights (not in defense of anyone) and was a legitimate bully. He also thinks the badge gives him rights to continue to act that way. I used to love the guy but now I hate him. People like him shouldn’t be cops. The way this guy carries himself he reminds me of that old friend.

Assholes everywhere, in every profession and section of society.
One as POSUS + V.POSUS now.