Just want to share this with you, I know the people here and have bought from before. They have a store front not far from me and the prices have always been pretty good.

For Sale – Buy at GunBroker.com

Asking stupid prices and preying on the American People is ulta Un-American.

I agree, but unfortunately it follows the old “supply and demand” rule of economics. 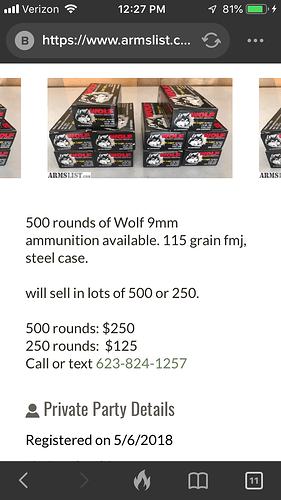 I’m certainly not going to sell my stuff at pre-stupidity prices so some moron can turn around and flip it for 3-5 times it’s value.!
If it’s a friend, that’s one thing…but the general public of sheeple is another.

No supply & demand has nothing to do with ripping fellow patriots off, just because you can.

I found some Blazer Brass 9mm at Cabela’s yesterday for $14. They had a limit of 5 so that is what I left with.

Ammo is still available at what used to be overpriced retail stores. My B-I-L is a manager at one. He said they get fairly large shipments of ammo regularly. They have people line up outside the store starting at 5AM to get ammo.
I suspect they are paid to stand in line and buy what ammo they can get so a gun show vendor can mark it up 2-3 times for the following weekend.

This is a tad expensive but cheaper than some I’ve seen recently. No idea about the quality.

Ammo can be found but i refuse to pay the crazy prices.

This is where I’m at and holding steady. The shortage has put a damper on any “fun gunning” for sure. But we got a long row to hoe before I run out.