Bought a Micro-Roni pistol brace. Installed a g17, red Dot ,and a light. Ran about 80 rounds through it today. No problems with Glock mags. 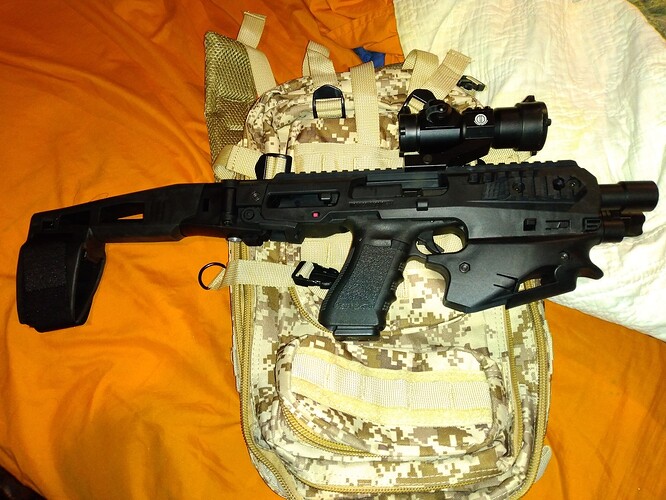 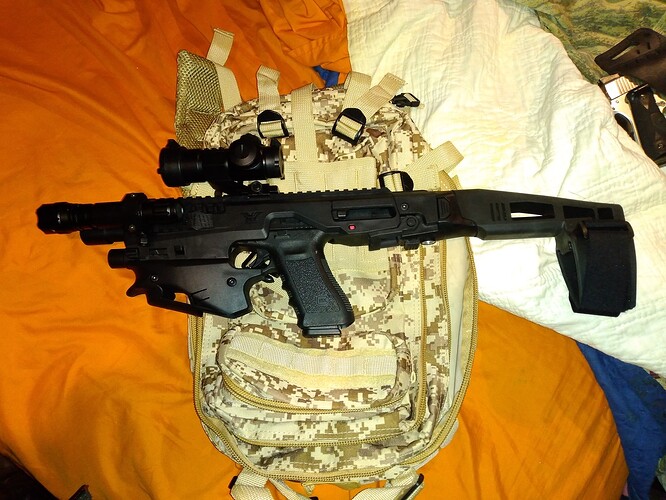 I don’t get these kits, do they have their own version of this or something

It’s an option for taking a handgun that you already have, and adding the capability of shouldering it with a proper cheek weld, along with it suddenly having a big increase in rail area for mounting sights and lights. I have seen a few people comment that it allows a way to legally have something more than a handgun in your vehicle, in areas where rifles and shotguns in vehicles are restricted, but permits to carry a handgun are legal (carry the pistol on you, and leave the Roni in the car, with no worries about leaving a firearm in the car where it could be stolen).

There’s not really any way to access a ‘switch’, if it was installed on the slide while the gun is in a Roni chassis, and I have my doubts about there being enough room for it to fit in the chassis in the first place. There’s another chassis (I don’t recall who makes it, at the moment) that is aluminum and does work fine with a switch. Royal Range did a youtube video on their full-auto Glock that they rent in that brand of chassis.

People have reported varying levels of accuracy, and the weak points seem to be how tightly the gun locks into the chassis, and any flex in the chassis, since you are using sights mounted on the chassis, instead of the sights on the slide. It is made to fit several generations of Glock, and to fit all of them without any requirement to “fit” them, so there is going to be some that have a little more play than others. A Polymer80 frame can be modified to fit, but it requires removing material from a few areas, and the slide ends up sitting slightly higher than with a factory Glock frame, so a small modification is needed on the chassis (at least with the CAA MCK first generation). It’s possible to keep the play to a minimum, by being very careful in fitting the Polymer80 frame to the chassis.

…and sometimes things just fall into your lap. 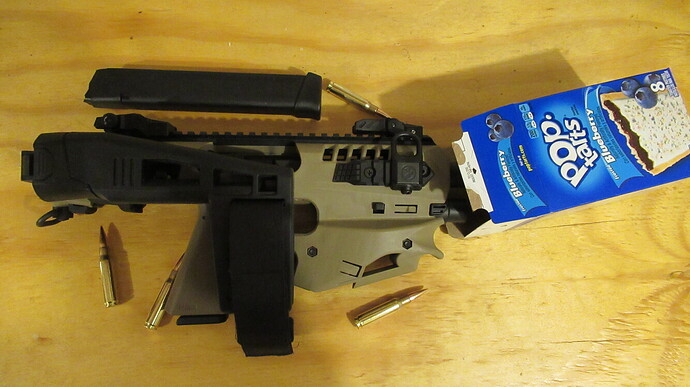 Edit: So far, I’ve been resisting the urge to order one of the kits for the Glock 20/21, and modifying it to work with a Polymer80 build in 10mm with a longer barrel. I have signed up for ‘notify me when this is in stock’ for some of the longer mags for the Glock 20, though.

Where you find a pop tart suppressor?

Where you find a pop tart suppressor?

A while back, there was a questionable (at best) story in the news about a baby shower gift, that was purchased from a thrift store, turning out to have a .22 rifle in the box (along with a mix of magazines and ammo that didn’t fit the rifle), instead of what was supposed to be in the box. Part of what made the whole story questionable, was that the rifle was not a ‘take-down’ model, raising questions of how it could fit in the box.

That picture was taken around that time, and posted in a thread discussing the story.

With or without cheese?

I love mine… It quickly turns a 9mm pistol into a better long range platform.

Well was out back shooting today. My sister shot the Micro-Roni. Now she has to have one too. When I explained it wouldn’t fit her Glock 36 she decided she needs a Glock 17 too.