Ok. I have had a private chat with a couple of Forum members and one suggested to graduate this to a forum post.

What is everyone running for a Milling Machine and what do you like, dislike, wish it would do, or do differently if you could do it again?

Oh, and thanks guys for talking to me on a private conversation yesterday!

I did buy the Harbor Freight mini mill and am content with it for my current use,

the only let down so far is my AR jig will not fit under it,

but for a budget minded beginner I like it

I guess I will throw in my two cents here.
In the beginning I didn’t know much about the machinists world, but I had a Mauser that had a sewer pipe for a barrel and it need a new one stat. I started looking into all the machines out there and I wanted a one size fits all solution and I found that enco, smithy, and grizzly all made a 3-in-1 machine. Mill-drill-lathe combo! I thought sweet the answer to my prayers. I talked with a few machinists and found out that the Chinese machines are not the best at all and that there is a great deal of difference between the brands making the same machine.
It works like this. China makes a bunch of machines. Then bidders from company’s come out and bid for them and measure the tolerance they are looking for. I found out that at that time Enco was the company requesting and only buying the tighter tolerance machines then so I bought one. 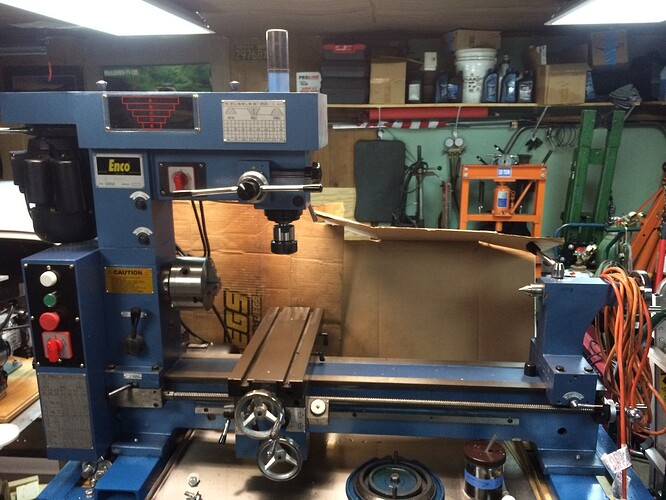 image1154×866 266 KB
I was happy and the build went fine. After a year it became abundantly clear that this machine was a lathe first, a drill second and a mill dead last. The machine developed a lot of play in the y axis. To fix that I would have to machine a new bronze square nut bushing😤. No fun. As I got better and more people needed things fixed I realized that I would need a bigger and better machine. I did a lot of research and looked into American, Japanese and Italian lathes. But they all where very expensive and all to often had missing or broken pieces on them. So I decided to buy new. Doing more research on Chinese machines it was interesting to me the bigger machine you got the quality went up as well. I settled on a 14”x40” gap bed lathe a grizzly G0824 to be precious. 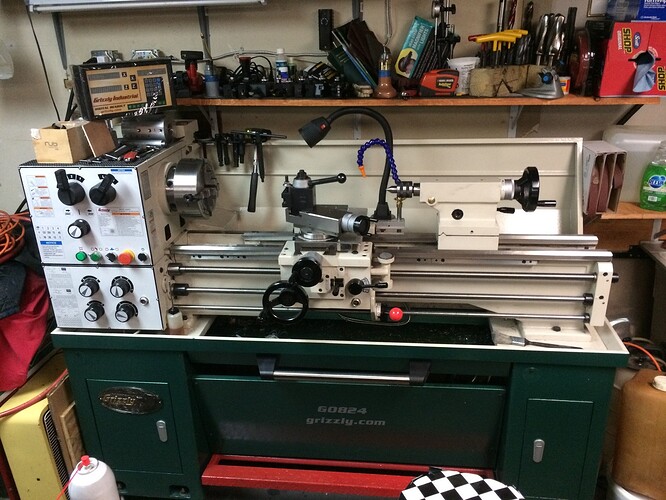 image1154×866 291 KB
2” through hole, 3,and 4 jaw 8” chucks. 70-2000rpm, with a Digital read out “dro” running 2.5hp on 1phase 220volt. I paid 5,800.00. I use it once a month at least and most times once a week. I would honestly buy it again.
That left me with needing a mill. The market where I am for old mills is slim to none. Places like California, Florida, and the east coast are prime spots to find lots of good deals on used machines.
I was patient and kept on the look out for a deal, but all I found was very worn out Bridgeport’s that where 4,000-8,000. Not a good deal in my opinion. I was dead set on wanting a quality machine so i looked in to what Taiwan was making and precision Mathews had what I wanted, everything except chrome and scraped ways. I was ready to buy a new one for 8,500.00 when a business selling sharp mills put up an add for an Alliant mill fore sale! Alliant was one of the first Bridgeport clones back in the 80’s when Bridgeport stopped selling to wholesalers and only sold to Bridgeport stores.
I went to inspect it and brought it no haggling at all. It was in mint condition and the guy just wanted it gone. It was s trade in. 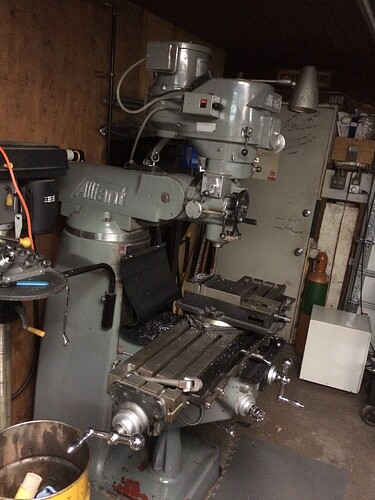 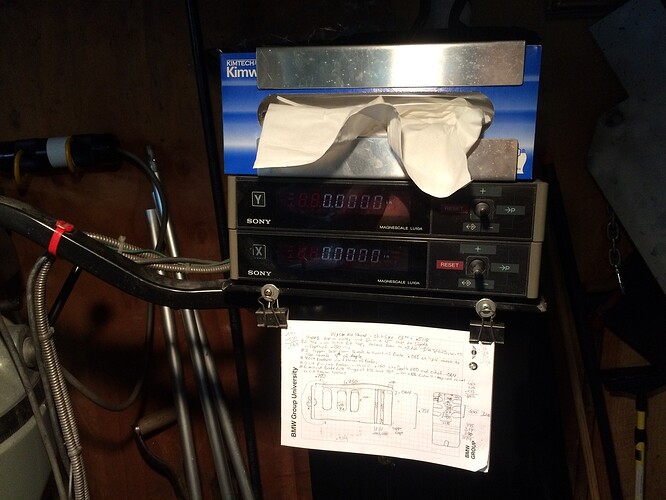 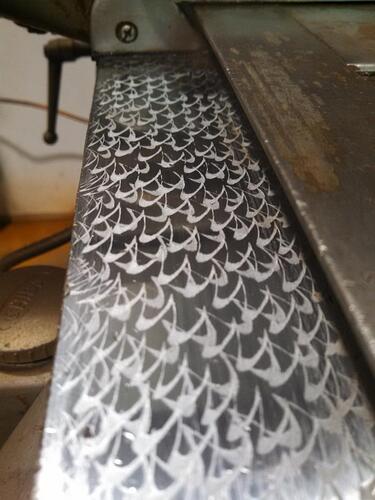 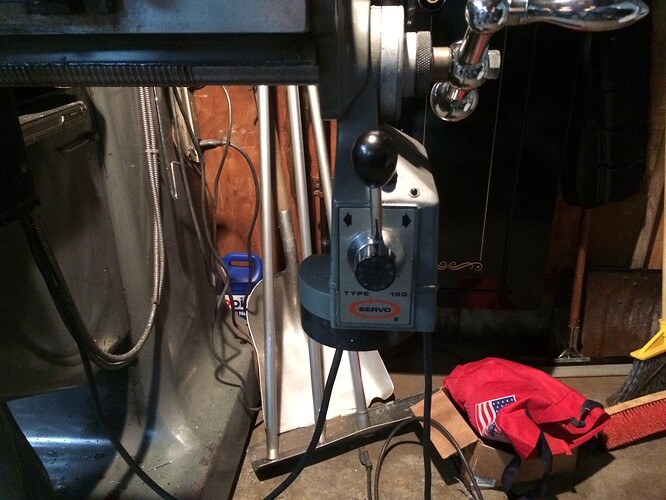 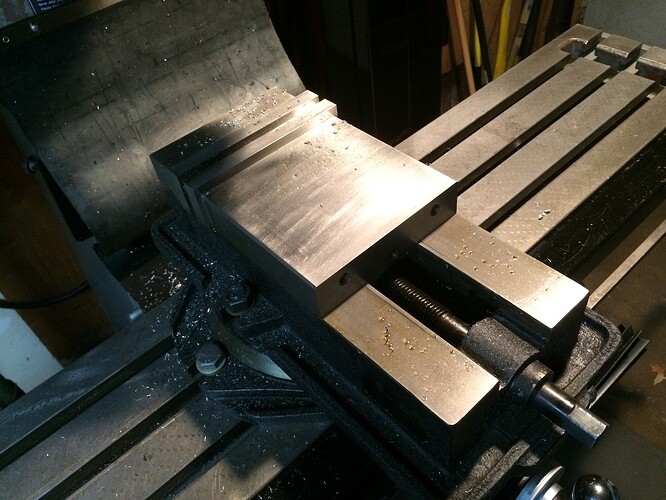 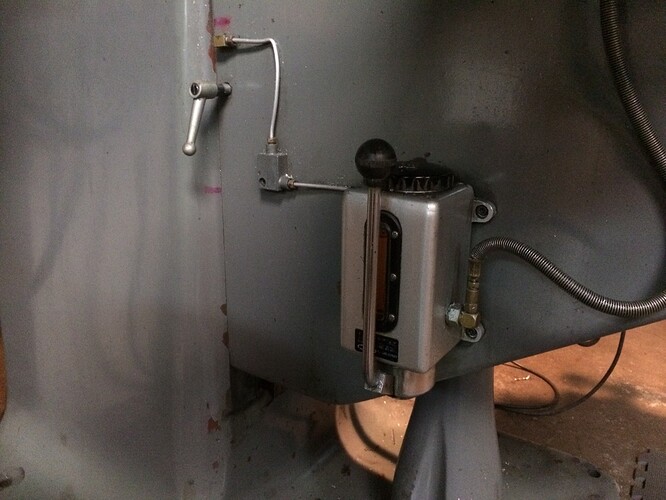 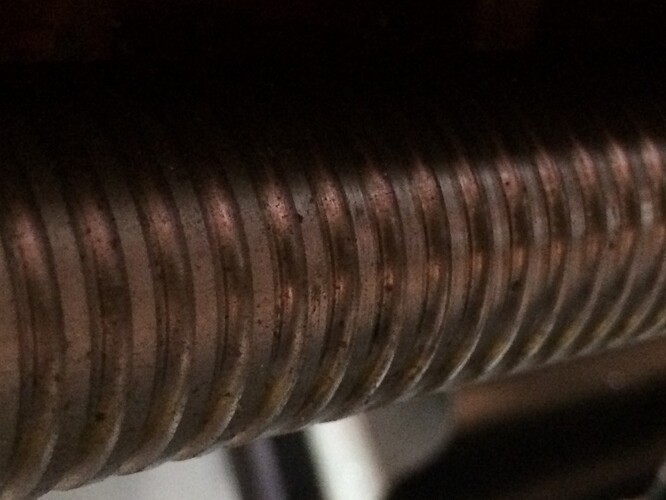 image1154×866 155 KB
Ball screws make a huge difference in accuracy.
Square cut thread will always have play so it can move and not bind. 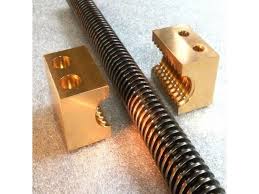 Ball screws on the other hand are very tight 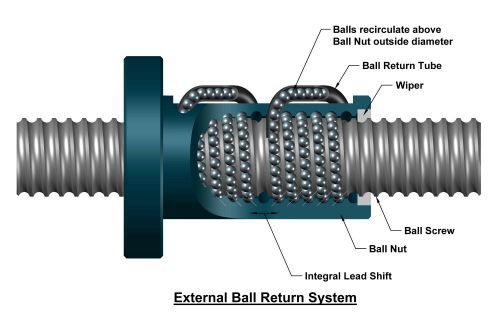 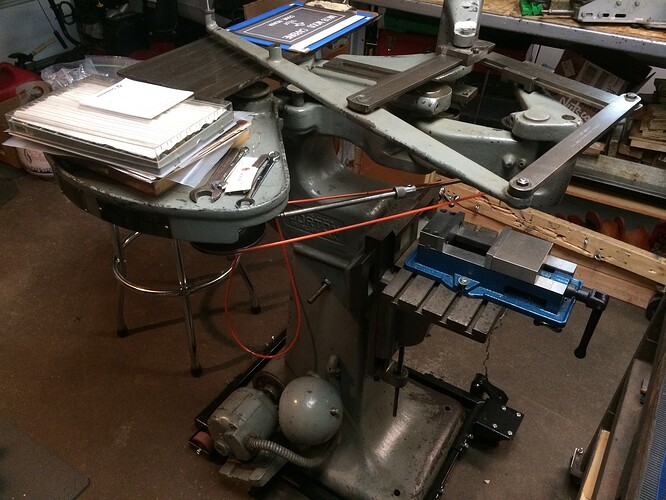 image1154×866 276 KB
One more thing you should buy a machinery hand book. I recommend for a home gamer the engineers black book. It is extremely helpful 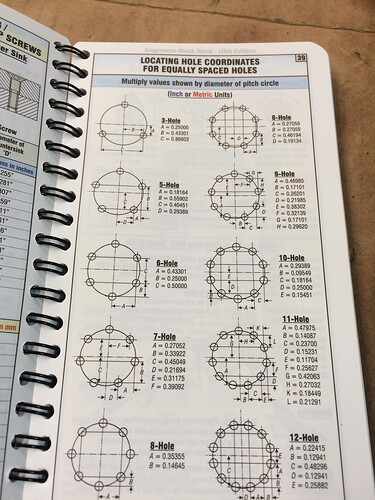 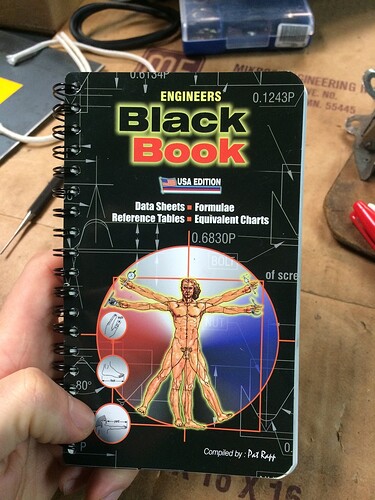 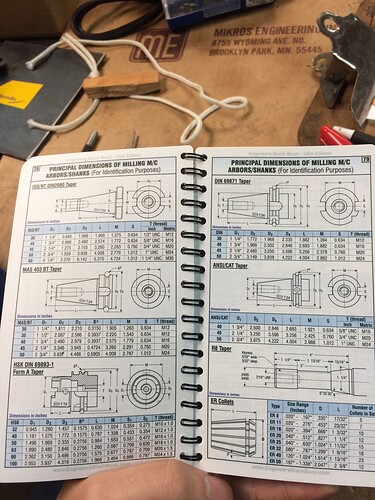 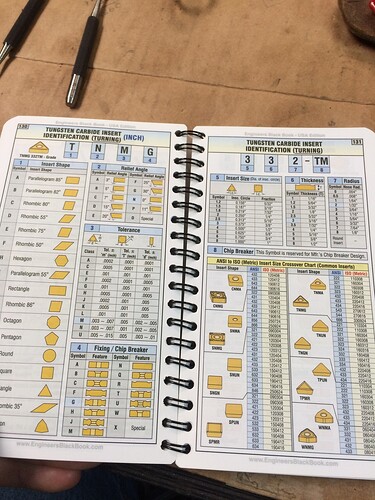 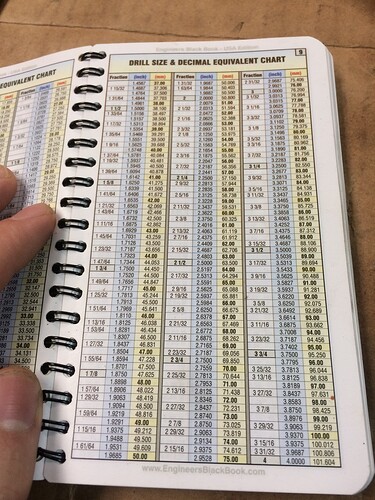 Yeah, I’m not even looking 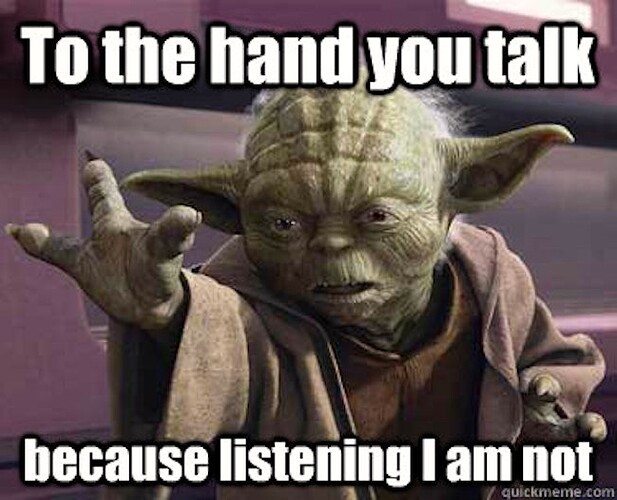 Like I said “ this was the selling point.”
Smaller machines don’t seem to have good resale value. Bigger machines keep there value and in some cases can increase.

Yeah, I’m not even looking

Lets be honest…, this was Switchpod bait!
You where waiting for this post.

Ok… that was one hell of an education in 5 minutes…

I am going to be in a lot of trouble when I get space and run some decent power to it.

Ball screws are very precise. I worked on through hole and surface mount placement machines and the x and y were repeatable to like .002" or .003" maybe better on an 18" table

Sorry @TheRogueBanshee, but i thought it would be better for me to use your thread to ask the following rather than starting a new one.

So i hope to be moving soon and finally having workshop space. (Think one car garage space)

After having had a number of ideas and projects pop into my head i strongly believe i need a CNC.
Given the space limitations i am leaning toward converting a mini mill to CNC so i can house it in an enclosure and use liquid coolant without making a mess.

A brand new mini mill with a large table and fixed column is $730.
CNC conversion parts run about $600
Then the motors, control boards, etc.

I know a full size mill is much more beterrer.

but if i was to think a full size CNC it would be huge, super expensive and could be a waste of space since i am not working on big stuff and would rather get a lathe in addition to the mill.

@Mosinvirus no problem. I have had the same thoughts you just put brought up and I am very interested in what people come up with.

I do have one question though. Cant you convert your existing HF Mini to a fixed column instead of buying a new one?

I have some ideas for you Brother.
I do believe in buying big so one can grow into a bigger machine, rather than growing out of 2-3 smaller machines.
When I get home I will put up some info up on your new predicament. Please be patient though we got 6” of snow last night and another 6” and it’s still snowing, so it might be a late night for me.

Thank you very much.

I do have one question though. Cant you convert your existing HF Mini to a fixed column instead of buying a new one?

My mill is very used, i got it used and the table ways arw worn in toward the middle.

If I am going for a fixed column, the current base needs to be modified, or i go for a new base and table.

If i go for a new base and table (large table upgrade) it will cost me $500
https://littlemachineshop.com/products/product_view.php?ProductID=5177&category=

So there is no point not to get a whole new mini mill for $230 more
https://littlemachineshop.com/products/product_view.php?ProductID=4962&category=

That totally makes sense. I have looked at that mill too. I almost bought one a few years ago. Kicked myself for not doing it several times.

@Mosinvirus
Ok Brother! I made it home.

I know how you feel about bigger mills, but if you think about it they really don’t break under the uses of your average home gamer, and you know as well as I do that the heavy machines will soak up vibration better.
With that said I would recommend you get a used, but in good condition knee mill and install an Acu-rite millPWR g2 on it. 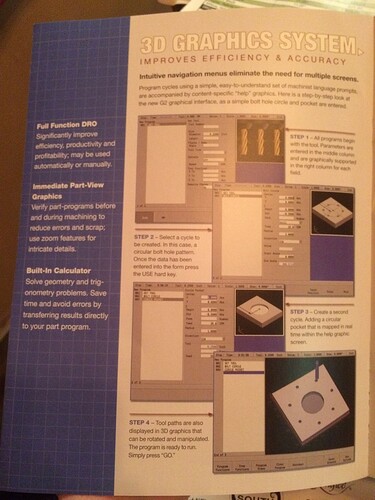 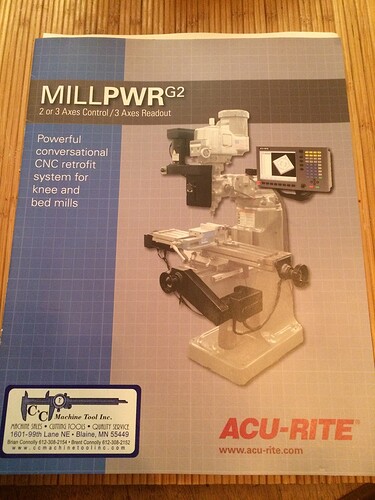 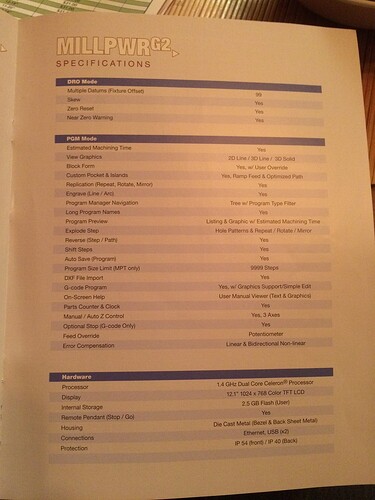 For cooling a simple unist would be perfect for the garage, and you can still breath the air in your garage.

The Coolubricator JR™ is a portable MQL system that is easy to move between machines and is ideal for drill presses, lathes, saws, and open milling machines where manual control and a single nozzle are adequate. 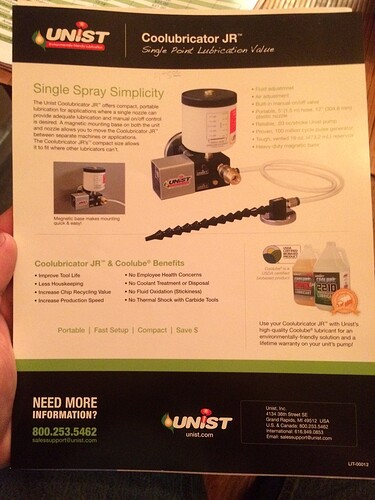 I realize I’m recommending an expensive solution to a problem. I have just been down more or less the same road as you, and after having a big knee mill it’s hard to remember how I did everything on a small machine.

I hope this helps, or at least gives you a good idea!

Years ago, I considered buying one of the Harbor Freight mini-mills, but after doing some research, it just seemed like the amount of money and effort that would be spent on upgrading it, made it a more expensive option than a larger mill. That led me to buying a Harbor Freight #33686 mill, which is definitely not as nice as a knee mill, but seemed like a decent compromise on price, capability, and required space.

The two biggest drawbacks on the #33686 mill, are the play in the feeds, and having to re-zero everything if the head is raised or lowered. The play can be reduced, with some work, but I kept putting it off until I had to move and the mill had to be disassembled to move it. When I have time to reassemble the mill, I’ll spend the extra time to get rid of as much play in the feeds, as possible.

As for having to re-zero everything after raising or lowering the head, because the column is round and has no way to keep the head from moving left or right in an arc (while it’s unlocked to be moved), my solution was to buy a cheap, red laser and mount it on the head so that it points at the opposite wall. A vertical line on that wall provides a quick reference point to show that the head is at least close to where it should be, before locking it down.