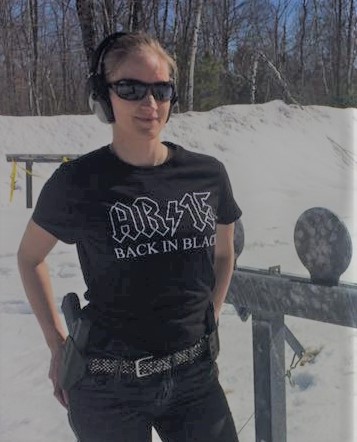 Most defenders don’t press the trigger. Most criminals don’t want to be shot, not by the police and not by us either. Study verbal commands.

You didn’t see it in the mainstream media, but again this week, responsible gun owners defended themselves and the people they love. Self-defense instructor Andee Reardon O’Brion joins the Self Defense Gun Stories Podcast to look at four new examples. Were these gun owners lucky, or were they well trained? (18-minute audio)

These victims survived lethal attacks because they had a gun…and good habits.

First story- Are you armed at work?

It is 6:30 in the evening. You’re standing behind the counter in your beauty supply store. The bell rings, and a few seconds later you look up to see two masked men with their guns pointed at you and pointed at the customer in front of them. You step back from the cash register and one of the robbers pushes the customer to the floor. The other robber jumps up on the counter and heads for the open cash drawer. You draw your gun and shoot at the robbers. Both of them run from the store.

Neither you nor your customer are hurt. You call the police and show them the security videos.

Second Story- Are you armed at home?

It is 10pm. Your son says he sees a strange bicycle and backpack in front of your home. You hear strange sounds coming from outside your home. You grab your gun and walk into your garage. There is a stranger pulling things out of your garage. You ask what he thinks he is doing, but his answer doesn’t make sense. You draw your gun and shout for your son to call the police.

The police arrive a few minutes later and arrest your intruder. He is charged with felony burglary.

Third story- Are you armed at home?

Officers arrest your attacker at a nearby hospital. He is charged with home invasion, battery, kidnapping, domestic abuse and child endangerment. He is being held without bail.

[ Fourth story- Are you armed as you drive? ]

You and your friend stopped your car in front of the post office. You hear someone shout and you see a woman fall to the ground. Her attacker has a knife in his hand and is stabbing the woman. You get out of the car and step towards them. Now the woman runs across the street to enter a business there. Her attacker moves toward you with his knife still in his hand. He has tattoos on his face. You and your friend present your firearms and tell the man to stop. You order him to the ground and call the police and EMTs.

EMTs take the injured victim to the hospital, and the police arrest your attacker. Your attacker was charged with two counts of aggravated assault with a deadly weapon and assault against a family member after a previous conviction of domestic violence.

Links and text of the discussion at the podcast webpage.

About this weeks hosts

Rob writes about gun rights at Ammoland, at Clash Daily, and on his SlowFacts blog. He hosts the Self Defense Gun Stories Podcast and co-hosts the Polite Society Podcast. Rob is an NRA pistol instructor and combat handgun competitor.