So, can I make/buy/have made a straight rifled barrel for the shockwave, install it then a regular shotgun stock and call it a day? Would it then still be a non-nfa firearm?

Possible destructive device. I’m actually surprised the Shockwave hasn’t been classified as such already. It’s over .50 caliber, isn’t a shotgun/rifle/pistol and somewhere some moron wants to claim it has no “sporting purpose”.
Your idea could also fall under the SBS statute as well. As far as I know, rifled slug guns aren’t exempt from the 18" requirement.

I see what you’re saying, and you may be right… the difference, maybe, rifled slug barrels impart twist… straight rifling like the reformation do not, another plus being less impact on buckshot pattern, win/win

Like I said, rifled or unrifled(twist rate doesn’t matter), once they determine it is a “shot gun”(shoulder fired etc) there is no exemption from the 18" barrel requirement. A better option for the Shockwave would be some sort of brace like those being used on AR pistols. I don’t know the legality of such a set up though, so don’t take my suggestion too seriously.

Edited to add:
SB Tactical already came up with a solution. 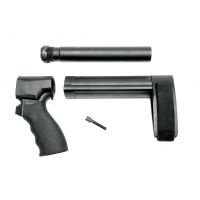 yes and no, they clearly state the atf says when you shoulder that it becomes an SBS, an illegal one if you don’t have the proper paprerwork.

I may have to write the atf and see what they say. I’m hoping to either find law that I see will clearly make this an SBS, and if not then get another “loophole” firearm that companies can run with.

Before writing the BATFu and putting this in front of some petty bureaucrat with an ax to grind who can reverse the departments prior “determinations”, where did you see that this makes the Shockwave an SBS if shouldered? I only ask because they once held that position about pistols with arm braces and have since reversed that position.

The Black Aces Tactical “firearm” comes with an arm brace from the factory.

Maybe I’m out of the loop and they changed on that too, but those black aces used to ship with warnings all over that said that, that was when it was legal with pistols the first time

As far as I’ve seen, the current “official position” of BATFu is that shouldering a brace is not “redesigning” it into a stock. Permanently mounting it, or modifying it to be more comfortable on the shoulder are. I don’t see how it would be different with the Shockwave.
In the case of the Reformation, the straight rifling was used so they could add a REAL stock and still keep it classified as a “firearm”. Without that rifling, they would have had to register it as an SBR or use an arm brace(making it just another braced pistol). An arm brace NOT being a stock, as designed, should not change the status of the Shockwave.
If anything, contact SB Tactical and ask them if they have a letter from BATFu clarifying the situation. The last time people started asking the gov about braces, it lead to a temporary position that shouldering was a federal crime.

No, The receiver must not have been registered as a pistol, rifle or shotgun previously. So you need to start will a receiver for a “Firearm”, as that is what you are making, not a shotgun.

You bring up an excellent point which I mistakenly left out. Any “firearm”(Shockwave/Tac-14/Reformation/braced AR over 26inches) would need to be built on a virgin receiver. Once a pistol/rifle/shotgun has been built to the point of the manufacturer paying excise taxes it is forever, barring a few minor instances, the type of firearm it was built as.