Seems we have enough members to start a two wheeled thread, we are in our wet season so my riding has declined, rode to work today, first time in about two weeks, smelled a bit of oil on start up…reminded me of my Chevy days 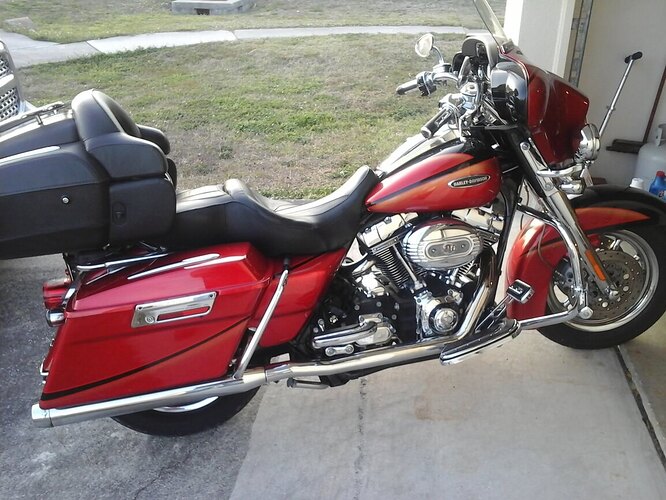 Looks comfy, too. Had it on any extended rides?

Wow. I (almost?) could be a member of that. I have done multi-hour rides on my old bikes, only stopping for gas every so often. Ok, that was many years ago, and the total ride was within a day. So, not like some uncles of mine that toured cross country on Harleys (that used to be a dream of mine to do that too).

Still, I would have thought you could/would take such a beautiful bike further. That’s ok. Just driving it into/out of downtown wherever would probably be good enough. 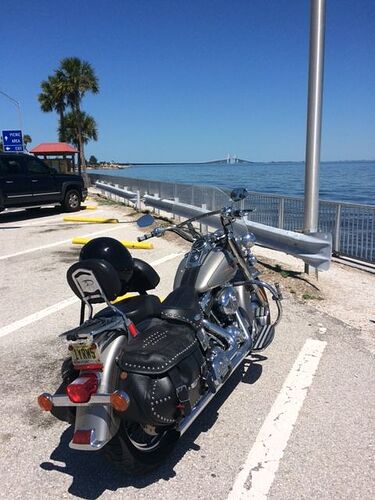 Did the Iron butt on this one long ago. 49 states Canada and Mexihole. Retired now and no rush. 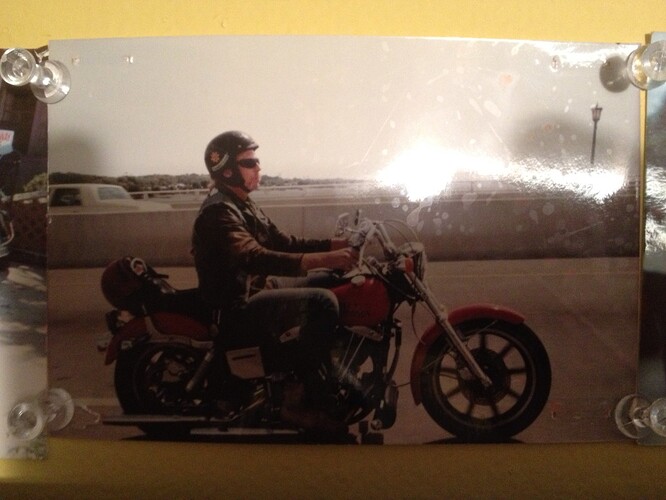 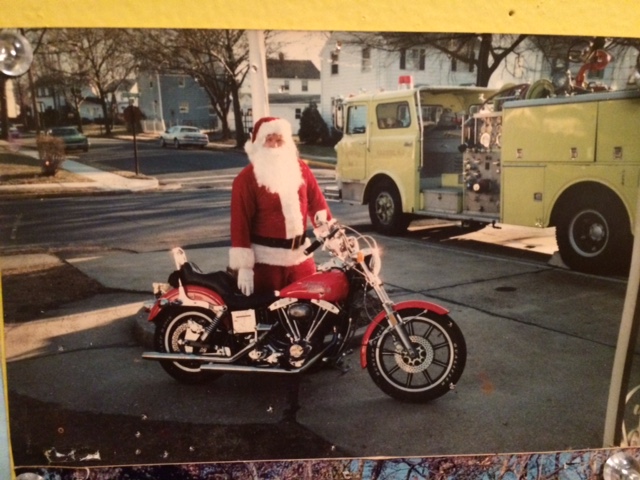 I sure miss my Bike… 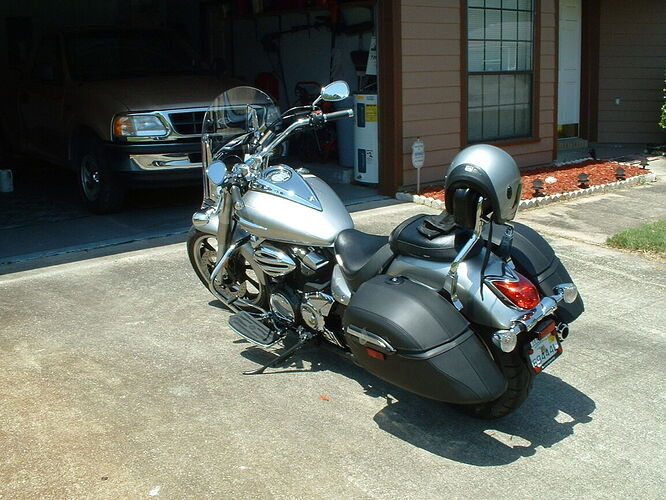 My ‘04 Harley Low Rider. I had to sell it when I got hurt- I couldn’t balance the bike anymore. Dang I miss her. 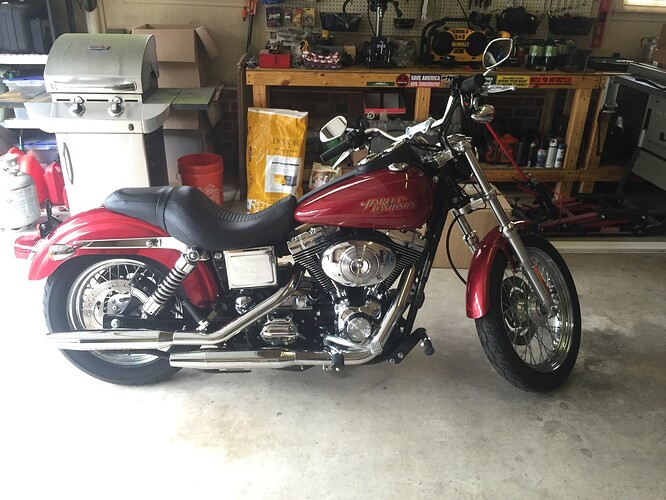 Yeah but I’m holding out for an old military bike with side car.

I can easily see how you would miss that.

I rode a lot back in the old days when euopean bikes ruled.
Started out with a Vespa scooter.
Then graduated to a Zundapp 200.
Followed by a bunch of others, including a couple of early japanese 125s, Susuki 360 twin, Motoguzzi 850 and lastly a Bridgestone twin 175, probably my favorite.
I was thinking of getting back into it until a rider got killed just about at our front door.
Dumb driver drifted through a stop sign playing with their phone.
Decided I was getting too old to be hitting cars, did that once.
Once was enough.
Now I just enjoy reading about others riding.
It never really mattered where I rode, it was about the ride, not the destination.
Anyone watch the Norman Reedus (alias Darrell from the walking Dead) motorcycle show?
Past episodes are available on the AMC web site.

It’s been about 10 years since I got rid of our bikes, but here are a few latest ones of many over the years. 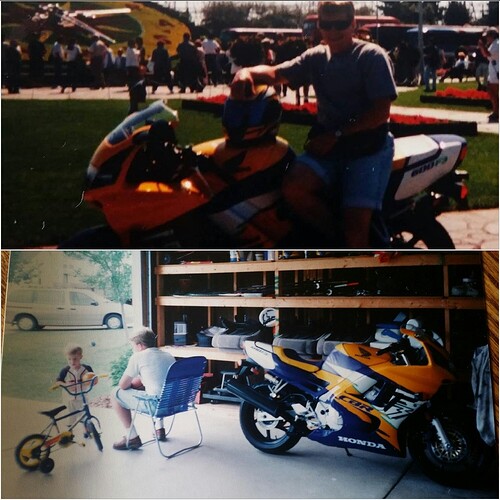 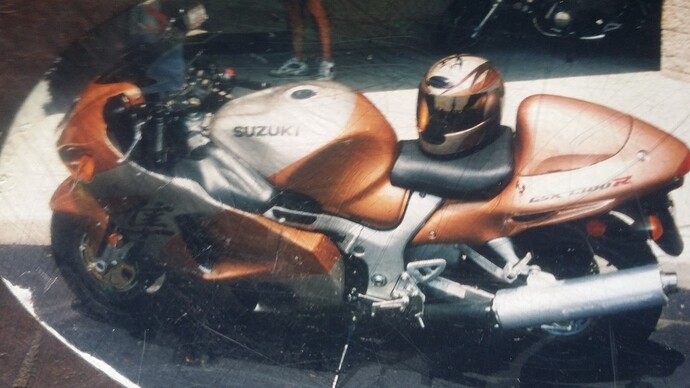 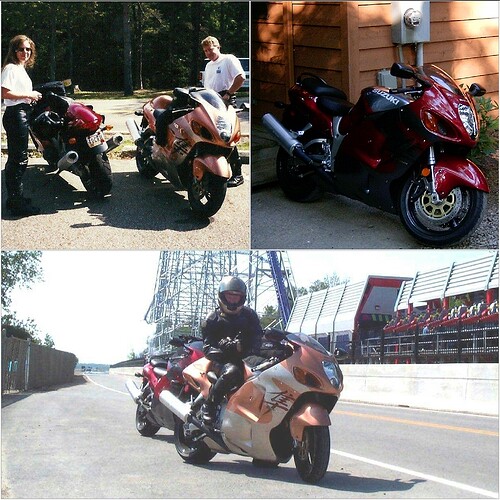 After years of my wife riding smaller cc bikes, I had her try to ride my Busa and she fell in love with it. That made me buy her the late 1999 model. 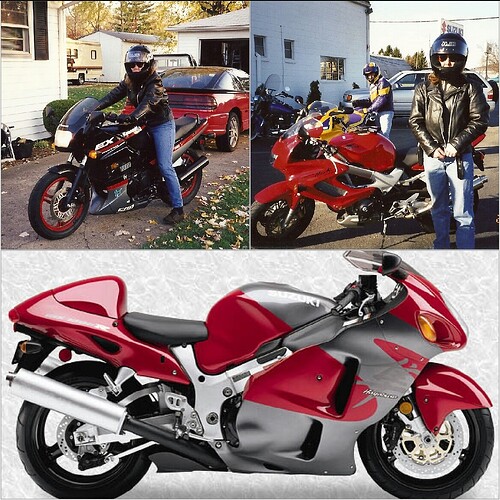 I ended up selling all the bikes back in 2009. Now that my boys are grown and off on their own, I’m thinking about getting back on the saddle again with a couple of cruiser type bikes. Not sure just yet what I’ll end up getting, but I’m sure I’ll figure that out once I’m ready.

Wildlife,
Just gotta’ ask,
How do you know your Honda 600 would go 165?
Almost forgot I had a Kawasaki 500 triple, and it was probably the fastest bike I owned.
Scary too, it was like an old muscle car.
Not enough handling or brakes to match the speed.
Can’t imagine what the 750 version was like.
Funny story about selling it.
Guy with his wife show up to see it.
I wouldn’t let him ride it until he paid for it.
Told him I didn’t want him riding it with my license plate, cause It was a real handful.
Wife hears this and calls him a fool for wanting it.
He eventually wins and brings the cash and rides it away.
Very mad wife.
Hope his buying the bike didn’t ruin their marriage.

The other day I saw the most beautiful wheely ever.
Heard a big engined motorsickle heading my way.
Front wheel as high in the sky as it could go, with the real wheel carrying all the weight.
A serious wheely.
The rider held it for nearly a whole block.
Wish I had a camera with me.
Very cool, worthy of Evel.

One early spring morning on my way to work back in the late 90s, I was clocked by a highway patrolman at 163 mph.

I seen the trooper as I passed him almost at top end speed on the other side of the highway and then seen him turn around to come after me in my rear view mirror.

Normally I wouldn’t bother stopping and have left many in the dust in my past, however this time I decided to stop because I seriously didn’t think I would get into too much trouble since it was a beautiful spring morning and nobody was in sight on my side of the highway. Kinda like no harm - no fowl I thought.

Anyways, the trooper was very nice and complimented me on my bike several times. He asked me how fast I thought I was going and I responded that the speedometer goes to 175 mph and I know I was doing that. The trooper was a 15 year veteran and asked for me to come sit in the front seat of the car as he called me in and have me checked out.

Again, while sitting in the car, waiting for a response from dispatch, he asked me how fast I thought I was going. I replied, “honestly, I really don’t know.” At that moment, the trooper turned the radar display towards me so I could see it clearly and it clearly said 163 mph on the display.

The officer was surprisingly very nice about it after I explained why I did what I did. He said, " look, I go to work this way every morning and I happen to be on my way to work this morning when I seen you flying down the highway. I appreciated that you stopped! And, I certainly do not want to spend the rest of my day doing paperwork on you, so I’m going to let you go with a warning. DO NOT DO THIS AGAIN, GOT IT!!!"

He also mention that in all his 15 years as a highway patrolman, I was the fasted he’s ever clocked someone on the highway at the time. He also said, “Christmas come early for me” and suggested that I slow my ass down, which I did to some extent for awhile. He truly was a nice guy and I was very grateful that he understood where I was coming from. I thanked him often, then I went on my merry way as did he.

I normally wouldn’t share this story with anyone, however please understand that I grew up on motorcycles practically. I come from a racing family. Speed was my thing back in the day. An absolute pure adrenaline rush for me no doubt about it.

Today, I have slowed my butt down quite a bit. I’ve had many fast bikes, fast cars and fast trucks over the years. I pretty much stick to the speed limits today.

Strange how much you grow up mentally after raising a couple of kids and have to set the example for them, at least for me anyhow!

The Hayabusa that I had, I took to the track on several occasions. That bike allowed me to go the fasted I have ever been on the ground in my life, which was an excess of 200 mph. Life is very different at those speeds to say the least.

Sorry for the long response, however I hope you appreciate what I’ve shared and how I know that particular bike would run those speeds any day of the week.

I can vouch for my wife has taken her bike over 150 mph trying to keep up with me from time to time. She was speed nut too back then.

My previous CBRs at best would max out on top end around 150 - 155 mph in stock configuration. I installed a stage 3 carb kit and a “Two Brothers Racing” header and carbon fiber exhaust on my 96 CBR F3 and that made the bike radicul and a hell of a lot more fun.

When I traded in that bike, the dealer called me the next day afterwards to tell me that the bike already sold. It didn’t last a day in their inventory, which I figured it wouldn’t last long for them.

Simply trying to keep up I do believe.

IDK, maybe she thought I was going to leave her?

I kinda think she wanted to test her nerves though, to see if she could handle it…

I truly was a bad influence back then, poor woman.

Hollywood is crazy like that. I was watching SOA and they were smoking cigerettes while riding.