I had a medical issue and that prompted me to just DO IT! What had I been waiting for?

The first was a .22 Charger SBR that came together when I saw the Copper Custom adapter for a fixed stock (Thanks Tim!). My goal was to make the smallest packable rifle (taken down) as possible. Why? Because I wanted it; 'nuff said; want is enough. But it turns out that it also makes one fantastic Steel Challenge rimfire open rifle with the lack of barrel mass.

Here it is as it is today in it’s final(?) configuration for Steel Challenge. But it could also head shoot a squirrel. No part is longer than 12" so it’s highly packable. I have yet to make a “knife roll” for the parted out rifle. If not used for Steel Challenge it could be made with an arm brace. Much of the internals have been changed for the better and can’t be seen. Here it is shown with options. 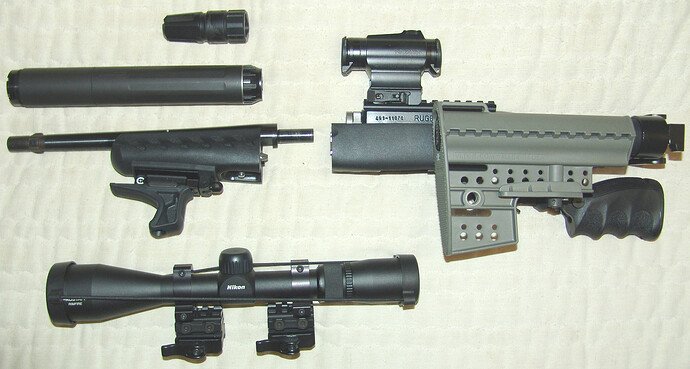 And here it is setup for use. The pistol grip has been folded down to make it usable. As much as possible I have it set up similarly to the SBR below.

Then my 2nd SBR project was envisioned. I shoot USPSA in PCC division. I had been shooting a KelTec sub2k that I heavily modified to make it “mine”, again, much is internal, but that long barrel…

Too, we had a cop killer running around in our “backyard” and doing chores with a slung long gun was horrendous, the answer was a SBR for the next cop killer that will hopefully never happen in my lifetime.
I have always wanted a Swiss rifle ever since lusting after a SIG AMT decades ago, but they were far outside my purchase ability at the time. Then B&T came out with the GHM9. The price was better than most B&T arms and I decided to just do it. Again, since I shoot USPSA there was no possibility of having it with an arm brace and using it for competition.

I bought it as the most ridiculous handgun you’d ever see, but after ~6 months the OK came down and I was able to remove the arm brace, stock it and further do what needed to be done. After much trying this and that and keeping what worked for me here it is in it’s final(?) outer configuration. The trigger is really a thing of beauty thanks to Gisselle. The pic’ shows the options but it’s set up for walks and competition. It’s (obviously) much smaller with the folding wire stock in place and folded but a hair too long for me when shouldered, but I can live with it if required. It works great for USPSA but of course requires ATF approval for taking it out of state. I only shoot in state matches. I’d love to see what it will do with someone really good behind the trigger.

Both SBRs are set up as much alike as possible for that “I’ve been here before” feel. Both guns share the same can. If anyone makes a .22 can that uses a HK 3 lug mount I’ll buy it. Both SBRs carry fantastically when slung.

I can’t help but think of zombies when I shoot these in competition. I blame “The Walking Dead” for that.

It’s next on my radar…nice set up!