I have a question for all my AK cono sur’s out there.

The company was founded by the Chinese People’s Liberation Army in order to provide competition to China North Industries Corporation (Norinco). (founded 1984)

so if you look at the date of inception - it would depend on the firearms date of production. I know that the type 81 is hit or miss production wise that comes out of Poly Tech.

Right on Brother! Thank you for that information. It’s nice to know that there’s a differences between the two.

I’ve never owned a Polytech, or even seen one live and in person. I have, however, owned a number of Norincos and can say without a doubt, that they are some of the finest built AKs and SKSs out there (assuming no Bubba mods).
I would take one hands down over an Arsenal, or Saiga, and yes, I have owned both Arsenal and Saiga.

I love my Norinco AK.

I haven’t actually shot it yet… but it sure looks sexy!

To a collector a poly tech is a Cadillac

Really because up here the thinking is a lot different - there have been a lot of issues with PTs such as rolled gas blocks, canted sights (to a point that you can not zero) and linear barrel plane just to name a few.
Guess the moment they become difficult to get the unicorn magic appears causing the inflated value.

Norinco vs Poly…Some say the Poly Technologies are the better of the 2. This is not a black and white answer. Poly was imported most famously by KFS, Kengs Firearms Specialty , Atlanta , GA. The Kengs had a very good relationship with China and were able to procure certain rifles to be imported in the USA. Possibly the most famous Chinese AKs,The Legend Series, were imported by Kengs and are Poly rifles. The Legends seem to have a very high level of fit and finish, with the surfaces highly polished and very nice bluing etc. Norinco also made a number of Preban AKs (pre 89 true prebans). These include the famous 56s, 56s-1 and many others. These are very good guns as well. Sturdy construction and most of the time, a high level of fit and finish.

Regarding the Bakelite side folders, which are a very desired, rare, and valuable Chinese variant. The Poly which is named AKS 762, is a very nice gun, and is mostly accurate compared to the Military rife. The Norinco version, which is called the 56s-2, is actually a more accurate representative of the true military model. I’m talking small feature such as the shape and size of the selector stop, details on the FSB, and other minor details. My point is, that it is not an accurate blanket statement to say that the Poly Tech is better than Norinco. (nor is it necessarily most desired by true collectors)

I think that Norinco gets the “cheaper” or “worse” mis-characterization because they continued to import AKs post ban. Therefore, the MAK 90 rifles, that are cheaper, and lack many features, seem to cloud peoples views. The dumbed down Sporter AKs were not because Norinco cheaped out, but because of the 1989 ban on military style imported guns. During this time, as demand increased and production sky rocketed, there were “some” observed QC issues. That is not to say the MAK 90 is a bad gun. I own several and they are great guns. I also own the above mentioned Legend and Bakelite side folder, 56s, and various MAK 90s. I base my decision on different factors between Poly Tech and Norinco.
Some of the time I prefer a Poly, sometimes I prefer a Norinco. I do like both equally when I look at the big picture.

Another interesting fact is that the early import Chinese AKs were not branded as Norinco or Polytech. Just simply by model and “Made in China”. I have several examples of these very early imports too. For example my RAI, Woodland Hills import, double folder ( under folder with folding spike bayonet) This is a so called movie gun. The movie industry was among the first to buy Chinese AK imports for film use.

With all that said, there have been issues cited with Norincos and Poly Techs over the years. None of these guns are always bullet proof, or “the best”. With that said, Chinese AKs are generally well built and I’m a big sucker for their bluing. They can be quite the lookers.

If I had to chose, I would generally say the Norincos might be a little better as far as durability. But as I mentioned earlier, Poly Tech had interesting offerings that Norinco never sold. So I like them equally, (although on a case by case basis) as a simple answer.

This is a complicated subject. I’m afraid I have bored most of you, but I have a lot more to share on Chinese and other countries variants if anyone want to discuss further.

Good explanation @Glockshooter79. I do have a quick question for you. Did the MAK-90 ever come with pre- band features? Like threaded muzzle, etc, etc?

No because preban features were illegal to import. There were some caught in customs at the time of the ban that were supposed to be prebans. Remember that the ban was an executive action by the first
George Bush. They quickly de-banned them. And in some cases tack welded a muzzle nut over the threads. So yes in that case it would have a threaded barrel in laymen s terms. But legally speaking not a threaded barrel. Some of the MAK 90s also had a under folder rear trunnion and receiver cut, with a thumb hole stock installed. So there are some crossovers, but by technicality had no “evil” features.

Thank you for the information Brother! 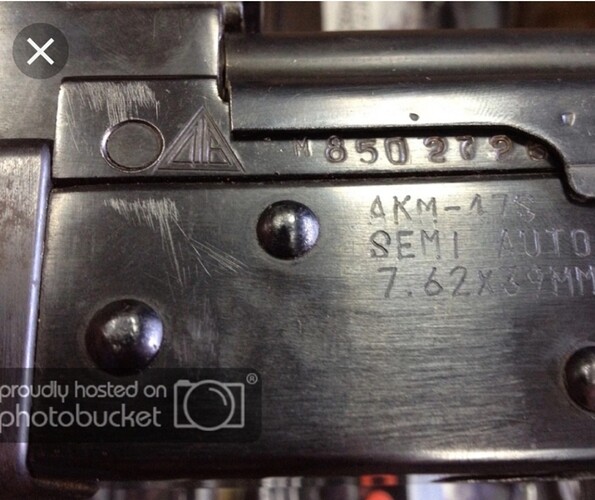 Good question. I would ask @ZEKESHOOTS or @Glockshooter79.
Both of them have way more knowledge in this field than I do. If I was to guess I would say that the pictures you have is a polytech.

What other markings are on the rifle? I have seen people fake markings. Have you owned it for a while?

I have to agree from the type 56 to the type 84s the Chinese make what I would consider a great AKM.