North Korean Type 68. The Attack of the Clones 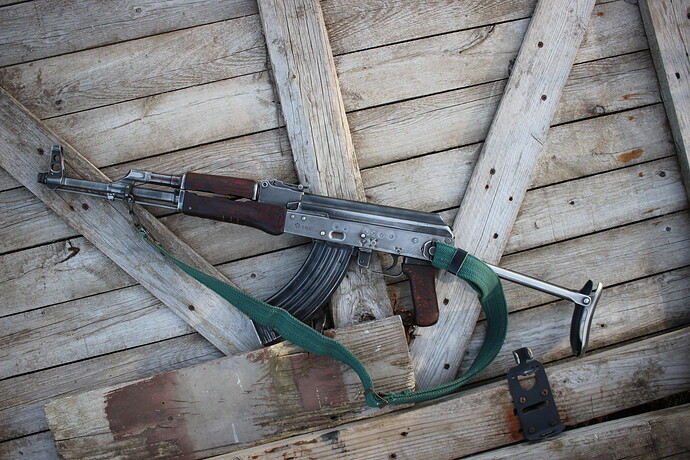 What Did I Get Myself Into?
It has been a few years since I first heard of the elusive TYPE 68. The Type 68 was a North Korean, produced Kalashnikov chambered in the familiar 7.62x39. It can accept standard AK-47/AKM, magazines and looks from a distance, just like any other run of the mill AK.
The Type 68 has four primary variants that I considered. The domestically produced full stock and underfolders, (Korean Markings) and the EXPORT full stock and underfolder. (Roman Numeral marked No Korean Markings). I opted to build the domestically built underfolder.
My journey in finding, buying and building one of these unicorns, led me to several dead ends and several within my own circle who have original PLO kits that are decent looking for sure, but are usually at such a premium in price that, frankly, if you did build it up. Would you even take it out? Would you shoot it?
It was abundantly clear that an authentic type 68 was going to be nearly impossible to find. Would I shoot and build an original? Absolutely. That is what they were built/intended for. When I do eventually come across one, It will be built. It will be used.
So, I have been talking about a clone this whole time. What on earth do I mean? A clone in this situation. Is a rifle that is built from enough parts from various countries of origin OR parts that have been modified in such a way that when assembled. The finished rifle will so closely resemble the original. That only an “Expert” will be able to tell.
Before I started, I asked around and studied both kits in person and pictures sent to me by friends over seas. It was originally my intention to slap a Romanian Model 65 onto a RECREATOR BLANKS 80% with North Korean markings. I eventually was talked out of this by friends and fellow builders.
I felt confident that I could reproduce a decent looking Knock-Off of the real deal. After mentioning my Idea to Matt, from RECREATOR BLANKS, he agreed to do up a “no name bread” blank with the TYPE 68 markings. Little did I know, he started work on a close copy of the actual Korean receiver. I only found out this when I opened the box. I could not have been happier.

Now with my intention to copy as close as possible cemented. I started by looking for a base kit that would fit the bill. I decided to go with a Romanian Model 65 as my base kit. 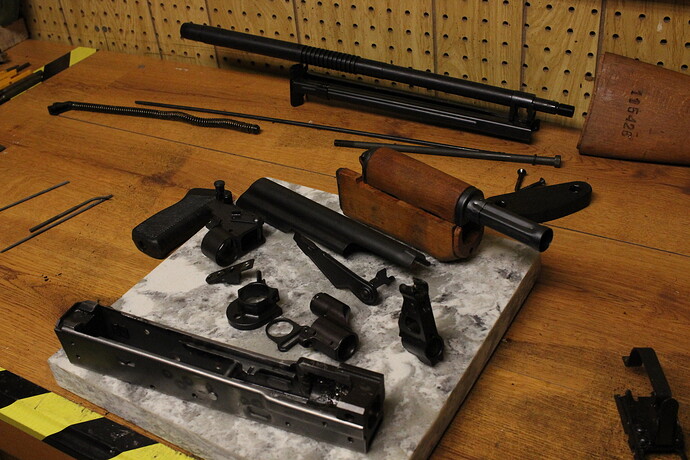 *Modified for looks or compatibility. 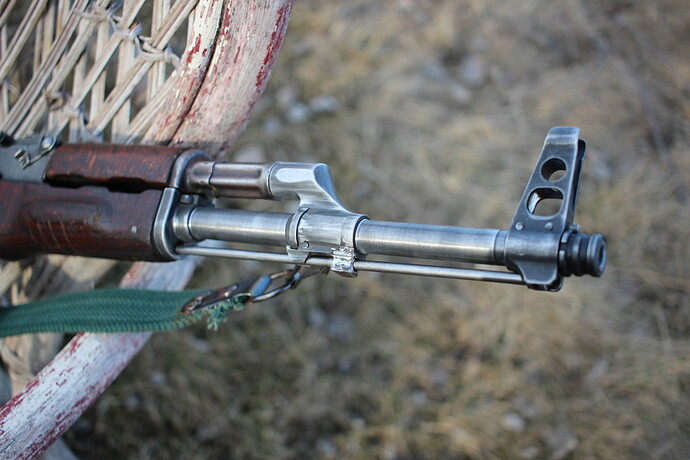 IMG_39921224×816 401 KB
Looking The Part.
When I researched the original, I noticed that the barrels were a Type 3 profile with an “AKM” front sight block. It was easy to see that rather than retool, the Koreans decided to go with parts they already had and just opted to make some modifications along the way.
I have been asked why I chose the parts that I did. This was because I wanted to discourage people from passing my clone off as a real deal Type 68. I will likely do this if I finally end up cloning a full stock Type 68.
The Polish parts were used because they did in fact look pretty close. I made the cuts that were needed on the sides and top of the gas block, as well as grafting the bayonet lug and modifying the cleaning rod guide/holder. The rest of the Polish parts were only modified to accommodate the proper function of the rifle.
The use of Romanian parts was a no brain-er. I knew I was going with the milled underfolder and I was going to need the parts so I gave ARMS OF AMERICA a call and told them I needed a beater kit. I didn’t care if it was all oversize or not.
Now this is where it gets tricky. The Type 3 barrel being used made it impossible to use the AKM parts that I intended for the build. I had to hone the Front sight block and the rear sight block to within .002” to be able to press onto the barrel. The Rear sight block went on “as-is” It was the 1000 meter sight block. This is incorrect for a Type 68.
The front sight block was honed to fit like the RSB It was however modified to look as close as I could get to the Type 68. This involved performing the lightening cuts on the sides and the see through cut on the back of the block.
Yes, I used a Romanian Front and Rear trunnion. I left these as-is. As much as I wanted to scrub the arsenal marking off. The fact that it was marked 1968… It was a sign. Haha.
The use of the original Romanian furniture worked great for the distressed look I originally had on the rifle. Once it was blued, I decided to use the Hungarian AK63-D furniture I had laying around. Obviously the pistol grip wouldn’t do as it was so I profiled, stained and shellacked the lower hand guard and pistol grip to look how it should.
Is he done gabbing yet? 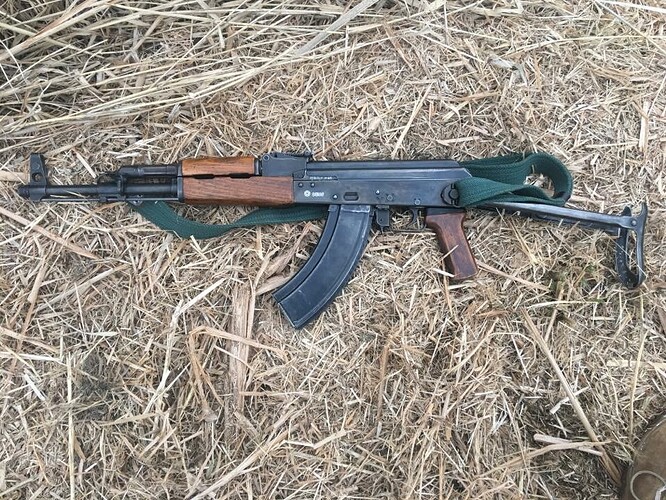 CF52BD2C-1EE8-4F1E-8905-E42ECAADE921960×720 273 KB
In conclusion, I feel that this rifle will make a great shooter. The compromises that had to be made during part selection led to something that looks nearly as it should. In the future. When I do come across the proper Type 68 rear trunnion, I will be able to swap it for the Romanian I had to use.
The icing on the cake was the timely release of the RECREATOR BLANKS North Korean 80%. Without that, I would not have been able to put together such a convincing clone.

361333×750 247 KB
No. I will not be offended if you copy my shopping list and build your own. The intent of this article is to inspire you to do your own and enjoy building your own rifle. Even if the rifle you are building is a fantasy.

This is an awesome thread. Mind if I ask the total cost for this all in? I love oddball stuff so this speaks to me.

I have around $500ish in the finished build. Many of the parts were left overs from other projects that buddies traded me for or gave me also ReCreator helped me out with the blank. all of the “fab” work was done by me.

Not a bad price! But someone like me with zero smithing skills or equipment has no hope.

AK’s are forged in the fires of Mordor. If you don’t have a buddy that knows someone. it’s hard to get in.

AK’s are forged in the fires of Mordor. If you don’t have a buddy that knows someone. it’s hard to get in

Buddy you hit the nail on the head. I want so bad to get in that group. When I get ready to buy my first AK I don’t want some thing cheap and crappy or boring and plain. THIS speaks to me. I love stuff that isn’t normal and a bit (or a lot) oddball.

I just got done with a 5.56 East German clone that is more of a fantasy build than anything. I even put markings on the receiver to make it look like it is a prototype lol. When you get into building, you end up collecting more than building. It’s almost like you can look over at any time and see Ivan smoking a cigarette, asking how your weekend was… It is at that point you crush a rivet poorly.

Thankfully I don’t have the financial means to do any real damage.

Oh post up some pics of the 5.56 East German clone! 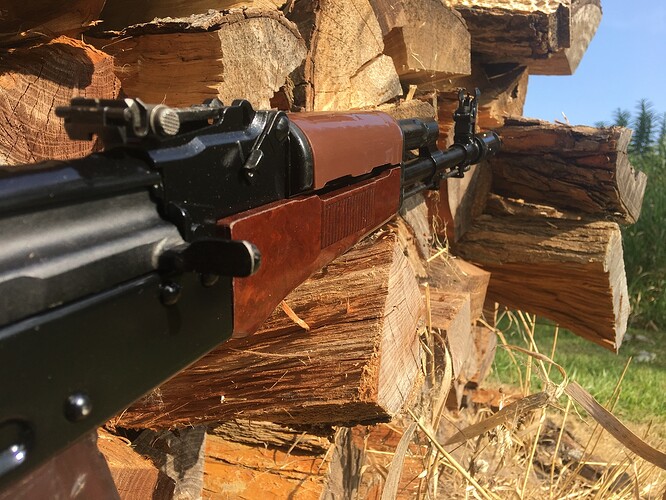 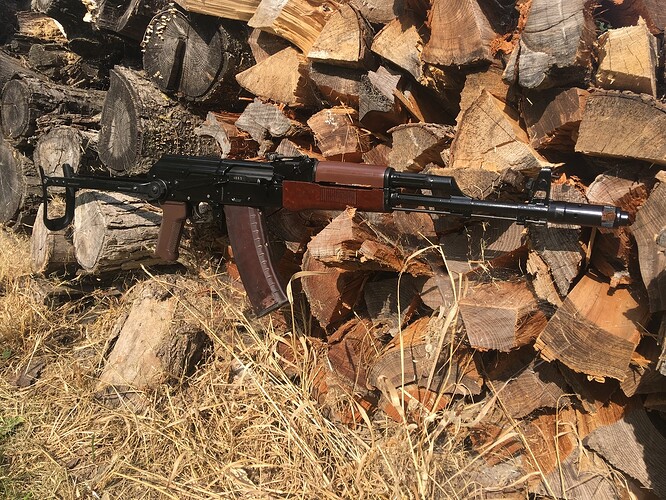 Excellent build and write up. I like how you do not make exact copies so they’re not passed off as real.

Nothing irritates me more than seeing someone pass something off as real. Not long after I had this built up, some guy in central Iowa popped up on armslist selling a Romanian m65 kit on a ReCreator 80-%. The guy claimed to have had it for years. Lol. I led him on till he sent me pictures pretending to not know much. Shortly after I called him on it. He pulled his post. Hopefully he did the right thing and didn’t proceed to screw anyone over. But that is my faith in humanity talking.

One day, when I finally move to the USA I will jump on building and buying a couple of AKs. Ones that go Fun, Still Fun, and Resting from Fun.

One day, when I finally move to the USA I will jump on building and buying a couple of AKs. Ones that go Fun, Still Fun, and Resting from Fun.

Oh? When are you going to make that happen? We’d love to have more legal immigrants who will love and support our constitution! Plus, you’re a badass with Mosin in your name. That’s good enough vetting for me!

Oh? When are you going to make that happen? We’d love to have more legal immigrants who will love and support our constitution! Plus, you’re a badass with Mosin in your name. That’s good enough vetting for me!

I already support our constitution. American by choice.

but I am in Komiefornistan (aka California) at the moment. Haven’t quite made it to USA yet.

slowly getting tired of fighting the State.

Unfortunately Mosin Virus is a social media name. Because a Mosin Nagant rifle “infected” me.

Real name is Igor. Yup, like in Frankenstein. Best is when I call somewhere and have to give my name… sometimes I get “Really?”. And I answer “yes, like in the movie” (because you never know if people read books anymore).

I already support our constitution. American by choice.

but I am in Komiefornistan (aka California) at the moment. Haven’t quite made it to USA yet.

slowly getting tired of fighting the State.

Ah ok. I somehow thought you lived somewhere else. But yes, please leave CA. It will never get fixed unless the state splits. Even Nevada is better than Commiefornia. You have plenty of options!

Thank you. It is great building. It gives you a better sense for how the rifle functions