So Bernie Sanders is gonna step up and pay his staff a $15/hr min wage. But has to cut their hours to do so. 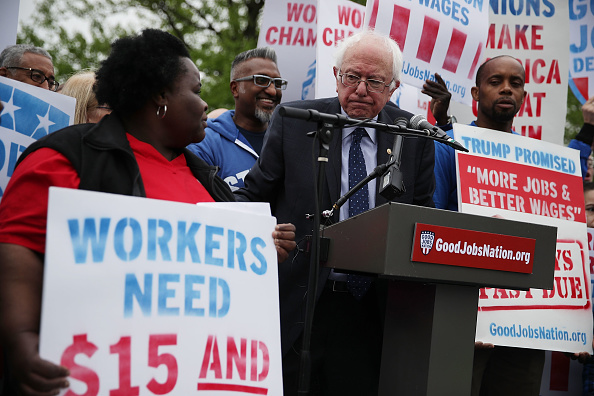 Bernie Sanders' 2020 campaign will limit working hours for organizers to...

Good man on the surface, but like all the socialists that I am aware, trying to"do" stuff out of the spotlight he has courted for a number of years. If he is a strong proponent of $15 an hour, why did it require a “journalist” to find out he was lying to his staff and all others that accept him as socialist—because it was HIS MONEY

Easier to pay his staff $15 for less than two years of work from money that is not his own, but rather donations made by people.

Its a different story having to pay $15 an hour indefinitely for the life of your business and rely on your sales to cover this cost. Totally different thing. You will have to raise prices. You may have happy employees but you will lose customers and your profit. And you will have to cut the number of employees to try and compensate and make things balance. I guess all these people wanting $15 an hour feel confident they won’t be the ones who are cut.

And how many businesses will go under now that they don’t have enough employees to keep it running?

Somebody needs to inform The Bern that his socialist utopian fantasy has one major flaw: As Margaret Thatcher eloquently said, “The problem with socialism is that eventually you run out of other people’s money.”

That quote from Margaret Thatcher is one of my all-time favorites. She really described it so well!

All these lovely “free” things (college, healthcare, minimum income guaranteed per month, ad nauseum), have to be paid for by somebody!

Liberalism ALWAYS has the opposite effect of its intended purpose!

Or, perhaps, the opposite of its STATED purpose?

They don’t seem to understand the concept of thriftiness, either. Just spend your way out of any paper bag!

What makes me laugh is that his people want more pay. If they’re paid hourly and get less hours they bring home less. If they’re salaried they’re not bring home any more cash to live on but more hours a week to spend money. Nobody benefits.

In a business environment all this is just magnified. Hours cut to jobs cut. Higher prices. (Not a problem for his campaign cuz they don’t have a product.)

But his people are about to see the stupidity of it all. Or they won’t. They may think they’re doing much better now. But anybody with a couple brain cells could figure it out.