Oliver Winchester: Founder of one of the most widely recognized names in the world of firearms 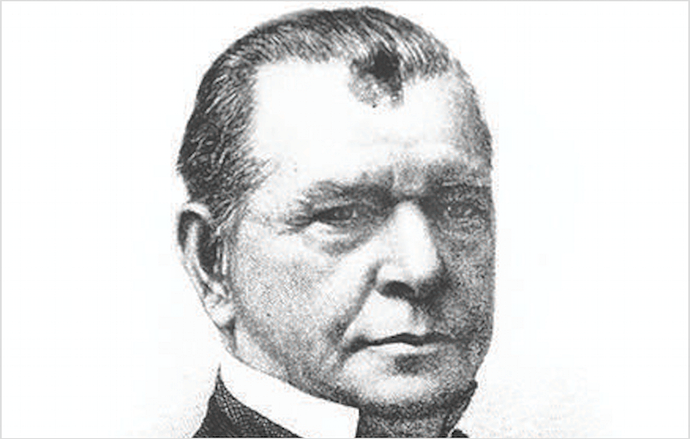 Today marks an important day in 2nd Amendment history. It is the birthday of Oliver Winchester – founder of one of the most widely recognized names in the world of firearms.

Oliver Winchester was born in Boston, on November 30, 1810. He started his career with a clothing company based out of New York City and New Haven, Connecticut. After successfully running this aspect of his business, Winchester began to look for new opportunities. Horace Smith and Daniel Wesson (yes, that “Smith & Wesson” who later formed the Smith & Wesson Revolver Company) acquired and improved a rifle design with the help of shop foreman, Benjamin Tyler Henry. Talk about a genius cluster! In 1855, they began to manufacture what would be known as the “Volcanic” lever-action rifle. The company would become incorporated as the Volcanic Repeating Arms Company; its largest stockholder was Oliver Winchester .

After limited success with this new rifle, Winchester seized the opportunity to take control over the failing company and renamed it the New Haven Arms Company. Although initial returns were slow, Benjamin Henry, the company’s leading engineer, improved the Volcanic repeating rifle’s design by enlarging the frame and magazine to accommodate the all-new brass cased .44 caliber cartridge. This ingenuity put the company on the map, and in 1860, the patent for the infamous Henry rifle was issued. The next six years of production produced over 12,000 Henry, many of which were used in the Civil War. In the following months, Benjamin Henry, angered over what he believed was inadequate compensation, filed a lawsuit for ownership of the company. Oliver Winchester hastenly reorganized the company as the Winchester Repeating Arms Company to circumvent this issue.

The Model 1866 soon rolled out as the first Winchester rifle. Based on the Henry rifle, it came with an improved magazine and a wooden forend. In the following years, larger caliber rifles such as the infamous Model 1873 , “ The Gun That Won The West ”, brought more notoriety and foundation to the company. Although Mr. Winchester would miss the opportunity to see his company’s greatest achievements; he passed away in December of 1880.

Winchester Repeating Arms Company’s collaboration with John Browning brought about much success with a host of shotguns, including the still produced Model 1885 . The turn of the 20th century hosted a series of new arms developments, many from the top engineer at the time, T.C. Johnson. But it was the start of the First World War that set development and production requirements into full force. The company became a major producer of the .30-06 M1917 Enfield rifle for the United States military, and worked once more with Browning to develop the . 50 caliber BMG .

During the war, the company borrowed heavily to finance the expansion. In an attempt to pay down its debt following the war’s end, they used their surplus production capacity to manufacture consumer goods such as kitchen knives, roller skates, and refrigerators. The strategy was a failure, and the Great Depression sent the company into bankruptcy. John M. Olin’s Western Cartridge Company purchased the Winchester Repeating Arms Company at auction in 1931, with plans to restore the brand to its former glory. The Second World War helped this cause tremendously as Winchester produced the U.S. M1 Carbine and the M1 Garand rifle during this time period.

Over the following decades, the Olin Winchester-Western division struggled with rising labor costs and other companies’ cast-and-stamped production methods. By 1980, Olin decided to sell the company back to its employees, which re-incorporated as the U.S. Repeating Arms Company. Olin retained the Winchester ammunition business. U.S. Repeating Arms went bankrupt in 1989, and after a number of sellouts to forgien holdings companies, the New Haven plant closed its doors on January 16, 2006, after 140 years of producing rifles and shotguns.

In August of 2006, Olin Corporation, owner of Winchester trademarks, entered a new license deal with Browning to make Winchester brand rifles and shotguns once again. The Model 1885, Model 1892, and Model 1886 are all produced by Miroku Corporation of Japan, then imported to the U.S. by Browning. Currently, Fabrique Nationale d’Herstal (FN) makes the remainder of Winchester’s rifle and shotgun lineup in various locations around Europe .

Through its history, the Winchester name has experienced great successes and significant failures; but it’s truly an important story to know in the realm of firearms. Here’s to the man that started it all, happy birthday to Mr. Oliver Winchester.

John Garand: The Forgotten History of the Man Who Invented the Iconic M1 Garand Rifle originally appeared in the Resistance Library at Ammo.com.

10 Likes
The American Old West: How Hollywood Made It “Wild” to Make Money & Advance Gun Control