OK, @LonewolfMcQuade. this thing any good, I was gonna buy it the other day and they had no 22 pellets.

It’ll be ok for plinking & modest accuracy. It’s a budget rifle. Some of the break barrel rifles can get a little sloppy after a while where the barrel breaks causing it to droop a bit. Also, some budget springers/piston rifles don’t have quality valves/seals causing inconsistent velocity (which will effect repeatable accuracy) . Definitely good for an inexpensive gun & more than capable of knocking down cans or whatever else . May or may not be a tacdriver . I prefer a fixed barrel rifle, but they are a little higher price, about triple. Just my opinion from my experiences

I want it to pop squirrels with, I have a gamo 177. my wife has wore it slap dab out. range is not good anymore and the scope will not stay in one place. it has the grooves cut on the barrell like the old 22. I have tried everything to keep it from sliding back. I have not found one thing JB weld won’t hold, but it won’t hold that. I even punched a notch with a chisel as a stop. that didn’t stop it. They had gamos there but they had the same kind of mount. that ruger has a picatinny mount. but lord she has killed a bunch of squirrels with it.

Yeah, the dovetail grooves suck for holding scope on air guns lol. The gamo I use to have, I drilled, tapped & put a small stop screw in to help. That Ruger will thump some squirrel for You! The pic rail will fix the scope moving. Give it a shot, worst case take it back if it doesn’t preform to your likings. I think you’ll like the 22 over the 177 better

Thanks, think I will go get that puppy tomorrow. they didn’t have pellets so i’ll have to go elsewhere for them. The GAMO Swarm Shadow is ideal for hunting and pest control with its perfect combination of speed and accuracy.The 10X Quick-Shot technology enables you to shoot up to 10 pellets without reloading.

They had that one there too. how are you keeping the scope from sliding?

They had that one there too. how are you keeping the scope from sliding?

This one the scope hasn’t moved at all on it… im about 200 shots so far without an issue. The scope mounts into a specific spot on the mount that has a detent to prevent the scope from moving. 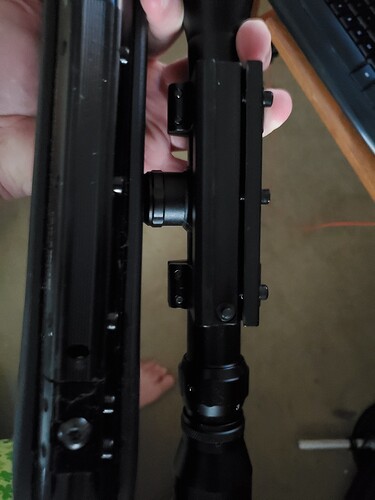 Cool, they fixt the problem looks like. my gamo don’t have that but that gun has 10,000 pellets through it or better.

Yeah its reading 1,150 average over 10 shots on the meter so I feel good about its lethality. I’ve taken 14 squirrels with it so far and only had to do follow up work on one. (my fault)
I’m a head shot guy on vermin though not sure if I would body shoot with .177

My wife is a heck of a shot, always has been. she used to shoot pistols with me and outshoot me. when this gamo was new she could knock em out of trees moving at 50 yards.

they didn’t have pellets so i’ll have to go elsewhere for them.

That’s been an issue here locally, everything is out of stock & not being replenished. I’m assuming Wuhun related shutdown caused a little pause in the supply chain. I had to buy a few thousand rounds off Amazon after I depleted my local stores stock lol

One advantage I did see with the gamo was weight, it was a lot lighter than the ruger. wouldn’t bother me none but for the wife it would make a difference.

everything is out of stock & not being replenished

They had some 177, not a lot though. think i’d rather have the 22. I had a couple as a kid and they would kill anything. even some things I ain’t proud of.lol

One advantage I did see with the gamo was weight, it was a lot lighter than the ruger. wouldn’t bother me none but for the wife it would make a difference.

This thing is fast also, I love the follow up ability. I’m a cautious hunter but to be able to take a fast follow up is something I still value.
I still Hog hunt with a Lee Enfield specifically for that reason.

They had that gamo in a 22 also, I had ruled them out cause I didn’t know they had fixed the mount. I know that picatinny rail won’t move.

Agree, my RWS in .22 puts a hurting on critters. I really like the Predator pellets, very consistent shape & weight, extremely accurate, ballistic tip seems to help with penetration.

https://www.amazon.com/Baracuda-Extreme-Hollowpoint-Pellets-Accuracy/dp/B00B7399TW that stops everything I shoot with it, Including cat sized bunnies. Probably beastly in .22

Yeah they open up when they hit skull and its lights out.