I love them. My two favorites are my Marlin Camp 9, and my Uberti Revolving Carbine in 45 long Colt. I bought the Marlin from a gun auction about 10 years ago. I have never shot it. When I took it down I saw the buffer pad was in remarkable condition. However I changed it anyway. I have never shot it. I’ve written to Marlin begging them to bring back the Camp 9, but to no avail. I think they (Marlin) are missing out on a very good, handy carbine. As for the Uberti, I’ve shot it and it is a HOOT! I only wish that Marlin would come to their senses and bring back the Camp 9 and the Camp 45.

PCCs are hella fun, and they’re great training firearms as 9mm is cheaper than .223 and you can shoot PCCs at steel closer than you can centerfire rifle.

I enjoy shooting them when I get my hands on them, still don’t own one… yet!

PCCs are something special. I really enjoy shooting mine chambered in 9mm. Bridges the gap between a handgun and rifle for home defense. Makes 9mm/.45 ACP just a tad more useful.

I agree one thousand percent. Nothing better than a carbine in 9mm or 45.

I recently picked up a CZ Evo3 S1 braced pistol, and it’s a great little shooter. While it won’t be replacing my bedside rifle, it’s still a ton of fun to shoot and the fact that it folds down into a small package is pretty neat. Definitely a good range toy with some practical applications.

Does anyone have a MechTech conversion carbine? I’ve considered buying one, but I haven’t conducted any research yet. Mech Tech makes quite few carbine conversions for most of the popular pistols.
Also take a look see at Rugers new PC carbine in 9mm.
It comes with magazine conversions for Glock and a variety of their own pistols.
If you can find one, that is.
Yeah, Marlin dropping their Camp Carbine never made much sense.
It looks a lot like their rimfire line of rifles.
It would be very welcome these days where the black rifles are banned.

Does anyone have a MechTech conversion carbine? I’ve considered buying one, but I haven’t conducted any research yet.

Dude, I do not like Glocks personally but that looks like it would be awesome. What’s the durability and usability of these? I’d totally buy a Glock to use one of those.

Your frame: CCU Available in:

edit
Makes me want to buy a used Glock and try this out next year when I can go back to buying firearms regularly with my bonuses.

Colonel Gal says ya all late to the PCC party.
Handier than Ruger PCC cut in half IMHO 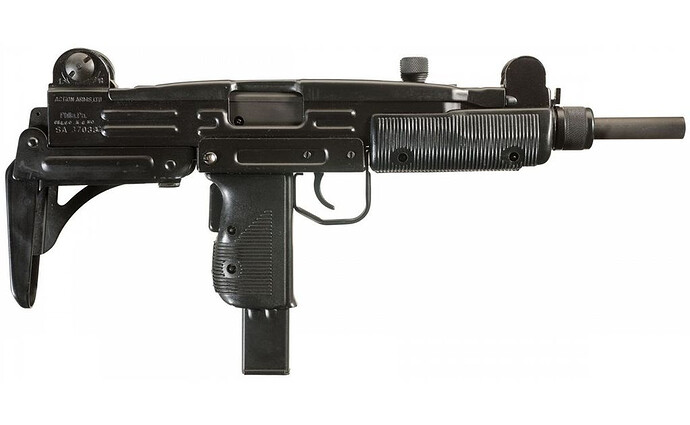 What’s the durability and usability of these?

I have done very little research on the MechTech’s, so I don’t really know. I did read that early models had some extraction issues, especially with lower power target ammo. However, recent reviews appear to be very positive. I will do more homework soon.

I agree. A darn good firearm.

Wish I had a PCC.

they’re great training firearms as 9mm is cheaper than .223

Great training where ammo prices are concerned but the ballistics and recoil impulse are totally different than rifle cartridges. If you’re only using them to teach fundamentals you might be better served going with .22LR.

I wouldn’t shoot either at steel close up unless using sintered ammo designed for the purpose. I was hit in the chest with a chunk of 9mm that bounced off the target hanger at the local indoor range. No harm, but if it had struck an eye the results would have been far different. Softpoint .223 rounds pretty much turn into spawl at any range when striking steel. Still not safe up close but less likely to ricochet.

If you don’t like Glocks save your money and just buy a P80 lower(if legal in your state). With a little work they function on MechTech conversions. According to MechTech:

"The Polymer80 will work on our CCU. However, there are a few small modifications that need to be made:
1. The steel Locking Block has to protrusions that stick out from the front of it. They are about twice as long as a Glock’s. These need to be trimmed to the proper length.
2. The “beaver tail” is longer than the Glock’s. It just touches a button head screw on our CCU when attaching. A small bevel filed into the bottom side clears the screw.
As with Glock frames you want to stick with stock trigger and disconnects. Lighter ones tighten the tolerances and can cause the trigger to not fire."

I have one of the older MechTech CCU’s for the 1911. I haven’t shot it in quite a while, but I never had any real problems with it. The metal stock vibrating against my hearing muff is a little annoying, but the stock is one of the things they have updated. Doesn’t seem to be designed with the intent of it being easy to completely disassemble, but it’s easy enough to clean without taking it any farther apart than removing the pistol.

Softpoint .223 rounds pretty much turn into spawl at any range when striking steel.

I wasn’t planning on getting back into this thread until you said that. That is oh so wrong. The generally recommended close safe distance for .223 is about 70 yards, most people say 100.

Please oh please do not shoot .223 at steel within that - especially at 10 yards.

I shoot 9mm at 10 yards regularly and there are entire shooting competitions devoted to shooting steel at 10-25 yards, with pistols and PCC.

You got spall from a target hanger because it was a steel surface that had irregular angles not designed to take a hit. A purpose built steel target is completely flat, usually angled, and designed for repeated hits. It most definitely is safe to shoot properly designed and rated steel with 9mm.

the ballistics and recoil impulse are totally different than rifle cartridges.

I’m going to guess you haven’t shot a tuned 9mm AR and a tuned .223 AR. While they are slightly different, they are pretty darn close.

No harm, but if it had struck an eye the results would have been far different.

Always wear safety rated eye protection for this reason. Regular eyeglasses or sunglasses is not sufficient.

I bought my first PCC for USPSA, or was it just because I wanted one? I don’t remember. But I wound up shooting it In USPSA competition and loved shooting PCC. It’s a KelTec Sub2000 in 9mm, and as MCarbo would come up with mods I would add them if I thought they would work for me. It is 100% reliable with brass cased ammo and a jammamatic with aluminum cases. It’s retired now. Very few folks use them with iron sights in USPSA and I didn’t either. They beg to have a red dot on them.

My 2nd PCC is a B&T GHM9 that I SBRed. It’s my competition gun today. It’s heavier than the sub2k but still nice. It’s more refined than the sub2k and I shoot it better since the controls are placed better for me. 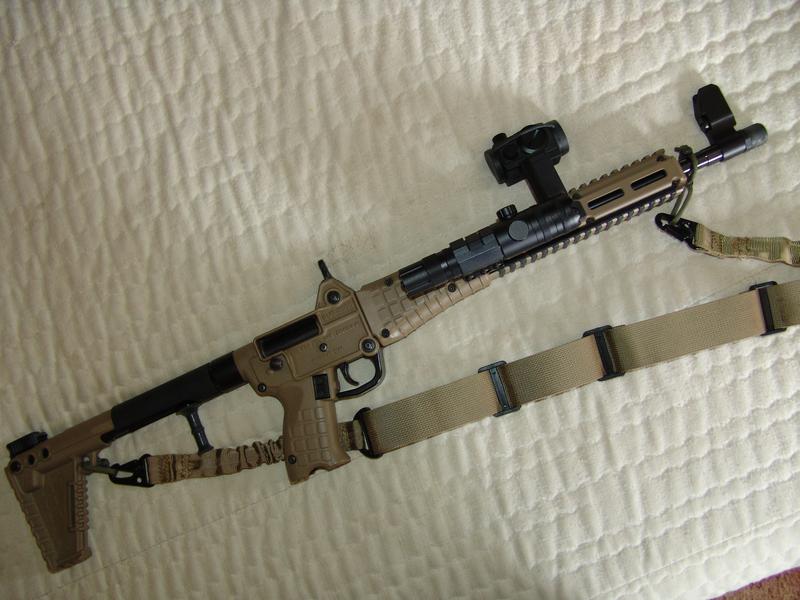 The sub2k in tactical peanut butter. I see that it’s wearing the 200mw green laser also. That’s very fast at close range since it doesn’t even need to be shouldered. I did have another PCC shooter remark about how the laser never stays still and he was sure I was spraying the target, but admitted that the hits were there. Yeah, the laser dot never really settles down when shooting and moving as fast as I can. The key is to coordinate the dot and trigger. At least that’s what I must be doing. 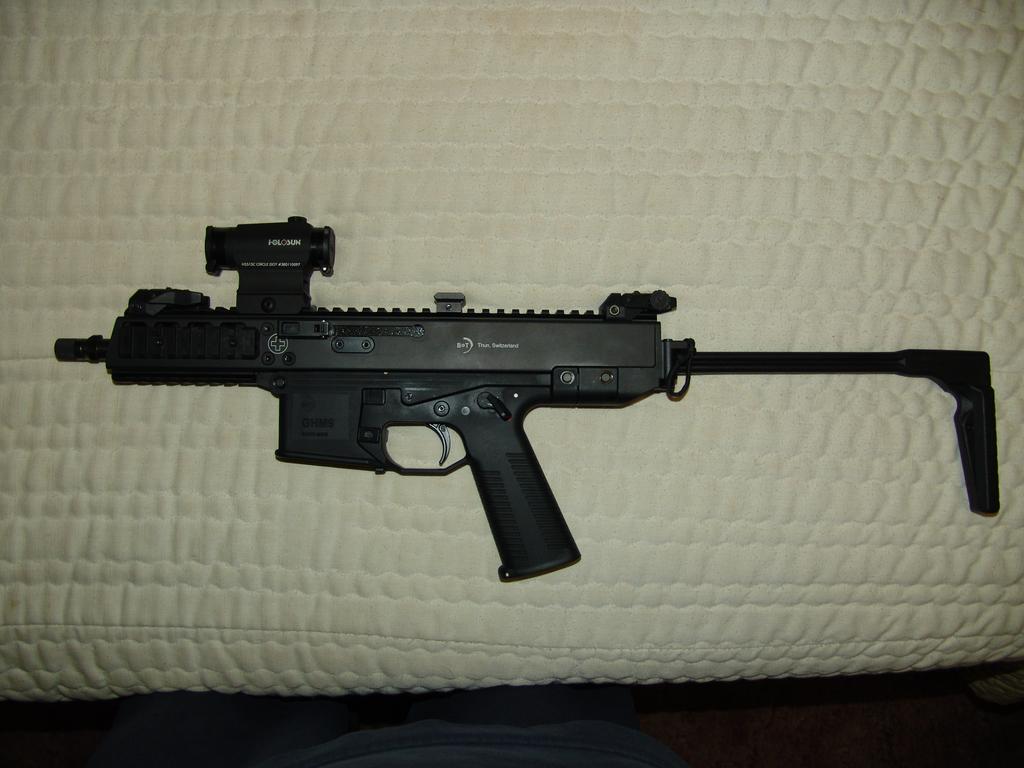 The GHM9. Here it wears the folding wire stock. Today it has a rigid stock but mostly looks the same other than that. Sharp eyes, if I had a current picture, would see mods for competition. It too can wear the green laser seen above on the sub2k.

Please oh please do not shoot .223 at steel within that - especially at 10 yards.

I shoot 9mm at 10 yards regularly and there are entire shooting competitions devoted to shooting steel at 10-25 yards, with pistols and PCC

I never said .223 was safe at 10 yards, even soft point, but there are frangible .223 training rounds designed for use on steel under 50 yards. My statements were: “I wouldn’t shoot either at steel close up unless using sintered ammo designed for the purpose” and “Still not safe up close but less likely to ricochet”. Note the ‘either’ in there. I understand some have no issue with it, but I do.

With 9mm(or other pistol rounds) in IDPA or IPSC type competitions the targets are angled(as you stated) so the rounds deflect down into the dirt(same as happened with the target hanger only intended vertical deflection vs accidental horizontal). Angles are relative and shooting even a properly set up AR500 plate from the wrong angle can cause a ricochet/deflection in an unintended direction.

I think the confusion is due to a different use of nomenclature. By ‘ricochet’ I am referring to large chunks or whole bullets deflecting off a target on an unintended/uncontrolled course and ‘spawl’ as the small bits and pieces of a bullet which splatter radially from where they strike the target. I have multiple steel plates on the family range from 50 to 150 yards, all angled to minimize deflection anywhere but down. The 50’s are only shot with pistols and any closer is done on paper. When we clean up the range there are often large bits of 9mm on the ground below and in front of the 50 yard targets. The 100 & 150 yard rifle targets have little more than lead bits and tiny pieces of jacket near them.

I was referring to common ‘off the shelf’ PCC’s(Camp Carbines/Ruger PC/most simple blowback AR9’s). The CCMG Guard with its radial delay blowback action for example is very close to the AR impulse but we’re getting into to $1K+ range.

I, and anyone else on the family range, always do.

I never said .223 was safe at 10 yards, even soft point, but there are frangible .223 training rounds designed for use on steel under 50 yards. My statements were: “ I wouldn’t shoot either at steel close up unless using sintered ammo designed for the purpose” and “Still not safe up close but less likely to ricochet” . Note the ‘either’ in there. I understand some have no issue with it, but I do.

I sure interpreted your phrasing as it is safe to shoot softpoint .223 at any distance.

Your phrasing could have been much more clear.

That being said - 9mm at 10 yards on a proper steel target is absolutely no problem.