Saw this, just passing along…

Many here may possibly know this already, but I have been seeing a lot of listings lately for scopes on various sites purporting to be Leupold Mark4 M3 6-24x50s or other models that are far to cheap to be reasonable. Close inspection of some of the descriptions admit in small print that these are “Chinese clones”, but most do not. Leupold even has a warning on their site (https://www.leupold.com/service-support/resources/counterfeit-warning) about these. Visually, these scopes look identical to the real thing including logo and other markings but are cheap knock-offs.

We strongly recommend against purchasing optics purporting to be Leupold products from www.wish.com, www.ioffer.com, www.aliexpress.com, and www.alibaba.com, among many others.

Leupold® is issuing a consumer alert to purchasers of Leupold riflescope products, particularly via internet sales, in regards to counterfeit Leupold products that are illegally imported from the People’s Republic of China. These fake products bear many of the trademarks and trade dress of current Leupold & Stevens riflescopes, and are sometimes difficult to distinguish externally from authentic Leupold products.

How to Check for Authenticity

All Leupold riflescopes are given an individual serial number. Counterfeit scopes often use a fake serial number, all identical serial numbers, or incorrect numbering convention. If you find a scope that is suspect, simply write down the serial number and call 1-800-LEUPOLD to ask if the scope is authentic. In most cases, we can confirm a scope’s authenticity by its serial number.

We encourage all consumers to protect intellectual property and combat counterfeits by reporting suspected counterfeits to www.iprcenter.gov/referral or by sending us detailed information using the Ask a Leupold Expert form and selecting “Counterfeit Issue” for the “How can we help you?” question.

Damn good info that I was not aware of, thank you brother!

I don’t want to see anyone get ripped off!

The chinese are cloning everything, stihl and Husqvarna chainsaws, Garret metal detectors and so on. They use the manufactures logo’s. I don’t know how they get away with it.

I don’t know how they get away with it.

They’re a communist nation. Anything they do has to be approved through their government. Which means this is government sanctioned. That’s how they get away with it. Fuck communists

We have had counterfeit issues for years up here - everything Trijicon to Doctor Optics, even Vortex isn’t immune

Every now and then you’ll come across a decent knock off. You know if you order stuff from Wish or Geek, it’s gonna be Chinese knock off. Sometimes it’s actually pretty great. And other times it sucks BAD. But for the price, occasionally it’s a risk I’m willing to take. But - that doesn’t discount the scandal of people selling crap as real. Just my 2 cents.

There has to be a way to tell the difference? I’ve had a chinese knockoff Bushnell TRS-25 and the only way I could tell is the actual paint material used for the Bushnell logo was just “off”.

I assume no way to know simply looking at an internet picture from a seller other than making sure you buy from a reputable distributor. I damn well guarantee you’ll know for sure if you are holding it in your hands looking through garbage glass with no eye relief and horrible distortion

WARNING: long reply with little to nothing to do with this thread,

One thing to remember is that a lot of name brand scopes (and laptops, televisions, missile and aircraft parts) are now being made in China because it saves a ton of money to the brand owner. Many US companies have no issue with that as all they care about is their quarter earnings; like the Indians and tech support the Chinese saw American greed as an opportunity and ran with it. Who is at fault here?

Second, there are really not many people making the glass for scopes. In fact, I honestly do not know if there are any company left in the US; I do think Germany and Japan are the places to order when you need high quality optics. I looked at the Vortex Viper box and it says it was made in the Philippines; I believe that meant assembled, maybe even the metal components were made there, but I would not be surprised if the glass flew from Japan.

What will come as a shock to some is that certain companies in China have made huge strides improving the quality of their glass. The Vortex Crossfire box says it was made in China and I would not be surprised if at that price level every single bit of that scope was made there. I do not think you can call it a piece of crap in the sub $300 price range. Since the Chinese .gov has a vested interest in having good optics for its own applications, I would expect it to pressure/given incentives to those companies; making commercial scopes is a great way to improve your skills for a military contract.

Since we are talking about Leupold, ask them and you will be told all their glass come from Asia. And that all Leupold Gold Ring products are made in the US. Take that as you wish.

Now, those Chinese companies their contracted will not turn down the opportunity to make some money on the side. I expect the ones making the scopes to turn around and sell the overrun models. But, they would not put the brand they were made for on the scopes or they risk losing the contract; finding those will result in getting a high quality product without the brand tax. That does not stop other Chinese companies though.

The joke is when the copycats are putting better products than the originals. I am looking at you, Rolex.

WARNING : long reply with little to nothing to do with this thread,

Lot more on topic that what I pruned out a day ago, much of which was my own, welcome back

You realize you’re defending a communist dirt bag country? I’m serious and not joking at all. This country gives their people loans and business opportunities not based on their ability to pay back loans but on their ability to praise the government and do as they’re told. You act as if this was a free market response to greed. That comment about made me puke.

Are you being an angry drunk?

No way shape or form

I agree with you about China but I also see his point that if the American companies would not outsource to them It would be much less of an issue. I buy American whenever I can but that only helps on the demand side and I’m not sure other than tariffs what the solution to the supply side would look like. Especially since the international governing bodies appear to either like China or be afraid of them. Thoughts?

he can answer for himself though

Especially since the international governing bodies appear to either like China or be afraid of them. Thoughts?

I would say, IMO, those bodies ideal a one world gov and the fall of the US so China getting ahead serves that end

Didn’t Trump say he was holding off on the last round of tariffs till after Christmas to help the American consumers buy cheep chinese goods. Who’s at fault?

When I bought that bi-pod I knew it was not an atlas. Yet when I got it it says atlas on it. I wouldn’t try and send it to B&T industries claiming it needs fixed. Wonder who’s scamming who? You tell me which ones which. 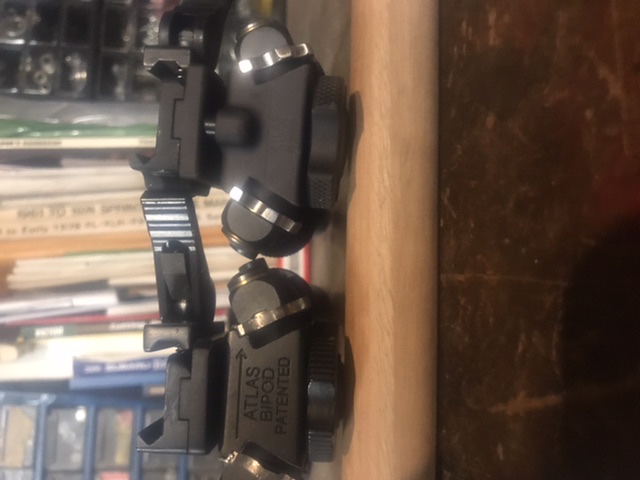