I need to post something to liven the place up though

Bunch of trouble makers and ne’er-do-wells round these parts, you fit right in.

yeah, they are double stack

Guy, guys, why the nitpicking?
The biggest problem folks have with the 1911, is that it is, purely a military arm. Let me explain: Military weapons do not require flared or lowered ejection ports, because they are meant to eject spent casings after firing at the enemy, not full rounds kept in the chamber for those thugs who make civilian life difficult. Military arms have spur triggers, because if the cartridge fails to fire, you pull back the hammer and hit it again, making sure it sends its missile out to the enemy. Military guns tend to have simple sights because under hard use, those big fancy things always grab a hold of stuff there not supposed to. Military arms don’t need to cycle reliably with hollowpoints, because there is this little thing called the Geneva convention, which this country did sign onto, and which is now the law.
Yeah, I know all too well that this man’s army has been issuing hollowpoints, flagrantly ignoring the law via cheap excuses, but that doesn’t change the law, it just reflects on a terminal lack of honour. In this, sadly, the military is not alone.
Really, when fully decked out with the civvy changes, the 1911 is one of the best, most reliable and accurate semi autos available. It has to be made well, with proper tolerances, and correct alloys to achieve this, something that hasn’t always been the case, but that’s the fault of those manufacturers, not the design, which is sound.
The SAA followed a similar trajectory. It was casehardened, because in those days, the process made frames tougher. It had a 7 1/2" barrel, because it was designed for accurate fire, not civilian carry. The safety notch was small and easily bypassed, because the gun was intended to kill enemies, not to be played with by civvy show offs who might drop it and kill themselves…documented to actually having occurred.
Now, you might disagree with the thinking behind these guns, the guns don’t care, nor do l. If this is too offensive to some, I might suggest the S&W polymer pistol, or a Glock. They are ersatz, but in this world of faded plumage, they do work.

Actually I happen to agree with most of that. The government only plays by thier rules when it’s convenient for them. There is no honor with the pencil neck politicians writing these bullshit rules that only neuter our troops.

Although the 1911 has not been a standard issue side arm for over 30 years. Now they use disposable plastic pieces of shit that make Glock look like quality pieces.

The 1911 when built right is a good fighting gun , no arguement. What’s funny about the new m17/p320 is that the safety is mostly only on troops sidearm the standard civilian equivalent of that firearm does not come with a manual saftey.

Safety is using common sense and keeping your bugger hook off the trigger until ready to shoot, period. The 80 series is also mostly bullshit that some pencil neck thought was a good idea.

Range Rugers and anything designed by JMB!

All these builders seem to install grip safeties, function and fit perfectly. My builds have them, function and fit properly and almost perfect. After fitting several the design in my opinion is well though out and rather ingenious for it’s intent. For a pistol that is designed to be carried condition one, not to mention the modern customs with a crisp 3.5 lb trigger, wouldn’t think of pinning any of mine. No skin off my nose though if someone else thinks otherwise.

An extra safety on a fighting gun seems rather odd to me. I mean JMB thought the Hi Power was a better design and it didn’t have that saftey, wonder if that’s coincidence or if there’s a reason for it?

I don’t really know much about JMB so I may be wrong here, I just remember reading that he preferred the HI Power.

The grip safety, aka the beavertail safety on the 1911 was not part of the original design, or even ordnance dept. guidelines.
If memory serves me correctly, it was arrived at after some military paper pusher or other slipped it in, possibly in order to disqualify the Luger from consideration. Luger actually did create a working 45 ACP prototype to compete for the military contract, and word was it passed initial trials with flying colours. I heard some years ago that a collector claimed to own this gun, which was supposed to be vetted by a team of experts, but I don’t know if this ever occurred.
John Browning and Colt worked together to arrive at the beavertail, attempting to craft the most unobtrusive, least offensive safety possible. Most think they succeeded.
The P 35, High Power = actually a translation from the French, was not completed before JB’s death, so it’s impossible to say for certain what the full design was intended to encompass. Certainly, the final version had no grip safety, but a number had a very obnoxious magazine safety that was responsible for worsening the trigger action. I think I’d rather deal with the grip safety and enjoy an excellent trigger.
I’ve fired more rounds out of various 1911s than I can recall, and when you add in friends and associates, the number of rounds is easily in the hundreds of thousands. Not once, ever, was the grip safety a pediment to proper function. Speaking personally, I’ve rarely even noticed it in my shooting. A good firm clamp down with the hand(s) was and is all that is needed.

Meh , to each thier own. I have ran 1911s through actual pistol courses and carried them quite a bit. The grip safety is just another thing that could go wrong if you don’t grip it right, I personally put a band on mine when I carry one.

No they never came in adult size 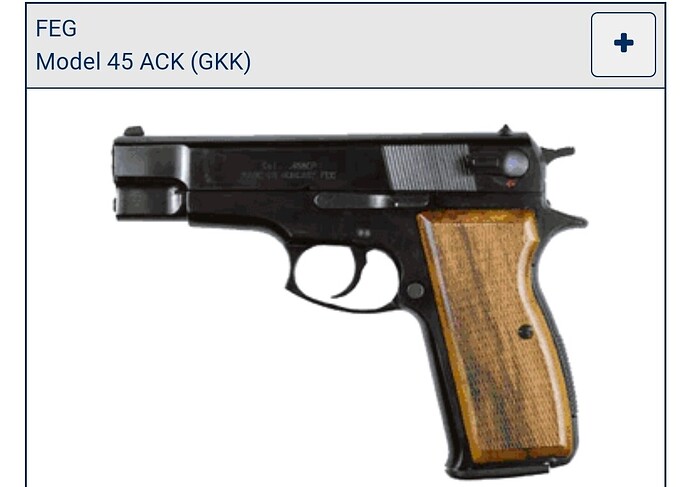 The High Power was designed around the 9x19mm cartridge, and for decades this was sole offering, but once licensing passed to other manufacturers in other lands, who knows?
FEG seems to be one of those companies that likes to push the envelope regarding cartridges and platforms. They tempted me a while back with a PPK clone in 9x18 Makarov, but I couldn’t get my local store to handle the sale, so it fell through.
A few years back there were some videos circulating of a tour through Pashtun territory, and I couldn’t help notice that one of their subjects was busily cleaning a stainless FEG High Power.