Reality of hunting after SHTF

Looking at Venezuela its easy to see how fast a starving country can devour its animal population. The part to pay attention to is the fact that they had a higher animal to human ratio than the U.S. and despite being socialist are generally more self reliant than the average American.

I used to hunt a little, its a great past time and like religion around here but the reality is most hunters over value hunting as a skill in a grid down situation. This is not meant to be a flame war on hunters but more of a reality check, I see and hear too many hardcore hunters almost brag how they would be able to survive any shtf situation based soley on their hunting skills.

Heres a neat article that goes over some of the numbers.

Why you shouldn’t count on hunting after T-SHTF

Heres part of the article:

– In the late 1800’s the Whitetail was almost hunted to extinction.

As man moved into the whitetail’s environment, he hunted them for food and more. Venison meat became popular and whitetails were almost hunted into extinction by the late 1800′s for their hides and meat. Venison was a delicacy and served in the finest restaurants from Chicago to New York. Refrigerated trains ran daily from the Midwest to these cites packed full of deer carcasses that had been harvested by professional hunters. People thought that the mid-western deer were an inexhaustible resource. They were wrong.

– Today the Whitetail Deer population is estimated to be at 20-25 million.

– Currently hunters must follow strict sets of rules, usually set by their state, including (but not limited to): Hunting Season Dates, Baiting Laws, Bag Limits, Quotas, Weapon Restrictions, Controlled Area Hunts, not to mention the requirement to obtain the actual hunting license.

– In addition to those rules, hunters are bound by a set of ethics, awareness and sportsmanship.

– If T-SHTF, all of those rules, regulations and ethics go out the window .

– The obvious conclusion: A massive population (many of whom are armed) combined with a food shortage after T-SHTF will decimate the deer population (and other game) in short time. The typical rules which exist to help regulate hunting will be out the window which will enable novice hunters to bag game."

These are very good points. It’s also why I can a lot, not just veg and fruit, but meat. Having a freezer full of meat it fine, until the power is gone.

Animal population would be gone quick! So you’re left with humans, the other white meat…

I dont know anything about this stuff and I do not own this book but I like this author. 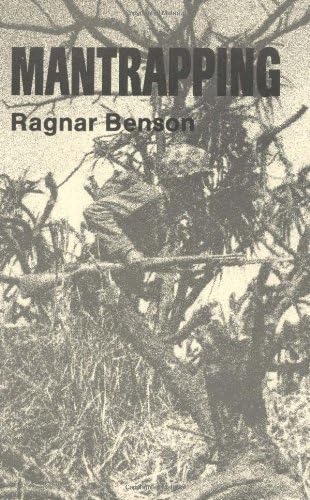 Big metro areas would see the largest die off in SHTF, the cities would run out of food in days. And many people in big cities have no idea how to survive. Meat comes from the super market, milk comes from a jug. They venture out in the country thinking they will survive? Heck, most would get shot walking on to someones land.

Training will improve your chances and most urbanites dont know how to hunt. I live in a rural area and alot of hunters do brag like that. Thats my whole point in posting this.

Thats why people should prep for general stuff. Getting specific would be a mistake but knowing the basics and training will improve your chances. Ive posted articles on this stuff from Ukrains survivors to Katrina survivors to Fer Fals stuff on surviving Argentinas economic collapse to Selcos stuff on surviving Bosnia during their civil war in the 90’s. They are good examples of how prepping increases your chances of surviving.

We’re all going to die someday, so it’s a matter of how one wishes to go about it when facing the abyss/inevitability.

Hunting & trapping are good knowledge skill sets to have if you believe you may find yourself in an situational type environment oneday leaving you with very limited access to meat, which is an excellent food source to maintain strength and build muscle.

Not everyone one of the 300+ million Americans are going beable to successfully hunt & trap thier way to survival in a timely fashion. It will be those that already know & have those skills that will out pace those that are lacking.

That is my belief & humble opinion.

Hunting also has other benefits, im not trying to knock it too much, its like religion around here and a great American past time. Venezuelas ordeal is pretty much the reality of what happens to a starving nation though, I think the U.S wiuld be good for about a year or two in terms of hunting animals (non humans).

When people hear prepper, they think tin foil hat the world is going to end, stockpiling a hundred years worth of stuff in a bomb shelter. Nope, that’s not it. I’ve been prepping for many years. Raised my own birds, had a big garden. Canned everything. I got sick four years ago and my health has been going down hill ever since. Money is tight, so we started to tap in to the pantry. It’s down about 2/3 now. I did a quick inventory today and estimate it will last another year. What I put away has saved us. The world didn’t end, there wasn’t an EMP, North Korea didn’t attack, the economy didn’t collapse, and aliens didn’t invade and enslave the world. Bad times hit us, and years of prepping paid off.

Every corner in the house was packed full. 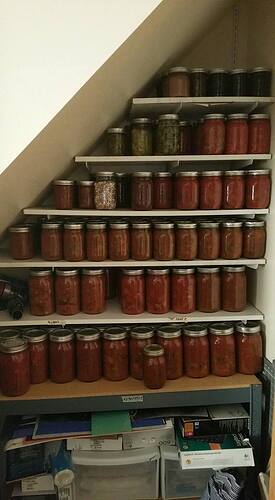 When people hear prepper, they think tin foil hat the world is going to end, stockpiling a hundred years worth of stuff in a bomb shelter. Nope, that’s not it. I’ve been prepping for many years. Raised my own birds, had a big garden. Canned everything.

What you are describing is prepping, to me. There are weirdos in the survival circles but there are also some real cool people with alot to teach. I wouldnt judge anyone for stocking up a bunker but I agree that alot of those doomsday people are “out there”. I like reading about the different scenarios and I keep general preps but I dont usually wear a tinfoil hat …unless the UFOs are following me again.

I prep.
Dogs will be fed illegals if it comes to that.
No biggie. Adapt and overcome.

This is a good thread jf89! And something good to think about.
I bought my house next to a huge natural water source and the biggest areas for natural springs, attempting to prepare for the worst. I have enough dry food for my family for a ~year. The kid is getting big so this could change. Even though I live literally a stones throw away from water I keep ~70 gallons of treated water on hand, and 72 gallons of bottled water. I also own filters etc,etc. All of this is a great start until someone comes to take it. And you mentioned this with “ man trap” people will hunt me.
We can be the best prepper we can be, but the fact remains it all depends on the type of SHTF situation that happens as well. Gas/food/emp/plagues/ nuclear?
I agree with the hunting scenario being sparse, but what if nukes knocked out all the major cities? Would hunters have a better chance then? Maybe? it’s hard to say, but one thing is true if you can hunt, champ, or garden you will be better off than the city kids will be.

We’re all going to die someday, so it’s a matter of how one wishes to go about it when facing the abyss/inevitability.

Good point. When the giant asteroid hits, I hope it lands right on my head. I have no desire to attempt survival after something like that. Sometimes, there are worse things than death.

I agree it is worth knowing.

They venture out in the country thinking they will survive? Heck, most would get shot walking on to someones land.

Another good point. I live in a rural area, which is a perfect bugout destination. During a SHTF scenario, I would expect to see an influx of starving urban refugees. People are very protective of their land around here, so trespassers/squatters would be putting themselves at risk.

This is very likely more probable than most people think. Kind of like “The Road”.
When the majority of people out there have no skills beyond using a smart phone, I see it as a very likely scenario that they will turn to eating one another.
Down here in Phoenix, most will die from exposure to heat, dehydration, and structure fires very quickly. I’m sure that disease will follow rapidly.