As of now I have a Mossberg hunting shotgun with an extended tube and a buttstock that has a pistol grip on it. It woks but is quite a bit long for clearing rooms or turning the tight corners in this house. So for now I am using it and an ar15 pistol in 300 blackout. Both work but as already stated I feel the shotgun is too long and the 300 I worry will have an over penetration issue on a missed shot. I may be over thinking this also.

Hoping to find something I can afford as of for now I am looking in the 5-600 dollar range. I want to get the 300 blackout back to truck gun and my shotty back to hunting configuration. Tired of switching it back during season .

Any ideas will be apreceated

Get a riot shotgun and use BB shot as its projectile.
Short barrel for utility on tight spaces and BB to inflict heavy shock to the body of a perpetrator.
Over penetration is virtually eliminated and shock to a body is what incapacitates.
The body can compensate to a point for damage it receives, so the idea is to inflict so many points of damage that the body is overwhelmed and goes into shock shutting down. ***We're currently not shipping this firearm to CA, or MA***   The 590 Shockwave offers legendary Mossberg pump-action reliability in a compact 14 inch-barreled package. This fi

Personally, I like a shorter-barreled tactical 12 gauge and #4 Buck. A 1-ounce load has 21 pellets, which are large enough to stop a bad guy, but could also penetrate drywall if you miss.

Size BB mentioned by @Grenz45 is good too. This round has smaller pellets, but many more of them…50 per 1-ounce load. Also less risk of wall penetration than #4 Buck.

If you live in an apartment or have kids in the house, #BB or similar size is probably the safer bet. However, #4 Buck or larger will have greater stopping power.

With credentials hard-earned over decades of military and law enforcement use, the 590 shotgun is the perfect choice for your personal and home defense needs

If you are carrying a backup weapon (handgun, for example), then either the Shockwave or Remington’s Tac13 or Tac14, may work for you. I like the Tac14 the best out of these. Alternatively, you could consider one of Stoeger’s coach shotguns. They are shorter than the tactical shotguns and may be more intimidating than a single barrel shotgun. Plus, you could load two different types of rounds, if you choose.

For ammo selection, from all I have heard and read, one of the smaller buckshot loads may be the best tradeoff between effectiveness and overpenetration. #4 buckshot would be an example of that (though, there are others).

Best of luck on your defense decisions.

the problem with the shockwave or tac13 is that they are a niche gun and very hard to use. However if you rely on the Joe Biden Home Defense Plan and making noise is your thing than great. Case in point I have always wanted a tactical shotgun with a pistol grip and fold over stock until I used one, The fold over was great however when using folded it increased the target ability to survive enormously - so all my shotguns have conventional stocks.
One ability that a shotguns provides you is the ability to shoulder which increases your ability to hit the target. And the birds head grips do not allow that, Plus tucking it into your hip is rather difficult.

Yeah, Tac14 not as easy to use as normal shotguns, but can be learned and are much shorter than even the double barreled shotguns.

In fact, you may want to consider going down to a 20 gauge (instead of a 12 gauge). Still quite potent, but much less kick - which matters much more when you can’t shoulder the gun.

A Shockwave with a “brace” pretty much checks off all the boxes for me for home defense. That said I use a 590 as I haven’t gotten off my asss to purchase anything else.

FYI, you need to watch this. Also watch Paul Harrell’s videos in shotguns for home defense. While not model specific the information is nonetheless valuable.

How about a plain old Mossberg 590?

A saiga or vepr 12 ga with a drum should do the trick too.

This is the Mossberg 550 12 ga I keep by the bed. Holds 8 with the extended tube, collapsible six position stock, short enough for maneuvering through house. 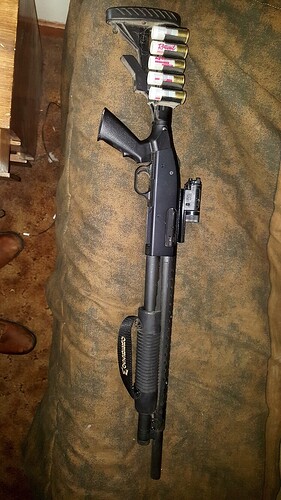 All that shit is going thru 4 walls into the next door house or your wife.
I have real world experience with this trust me.
You will be amazed at how well buckshot penetrates.
I fixed this by being ammo selective. AKA frangible rounds.
Tested three varieties and settled on the international ammo, very consistently turns into powder. WHEN IT HITS BRICK. No round in the world other than bird shot stops on plywood or drywall.
Know your backstop ALWAYS, organize your house plan for home invasion. (no matter what do this NOW, I was SOOOO glad I was ready when it happened)

Depending on the model of your shotgun, you may be able to just pick up a shorter barrel for it.
Mossberg is a good one for that.
I personally have a 20ga Mossberg shotgun with an 18.5” barrel…but my handgun is my home defense weapon…much easier to maneuver with in tight spaces, and I’ve trained the most with it.

I thought I would never say this… but that new Kel-Tec is looking good. A bullpup, 6 rounds of 3 inch mag in the tube but very short.
As soon as I can get one, I am. I will load it with mini shells so I will have about 11 rounds on demand. 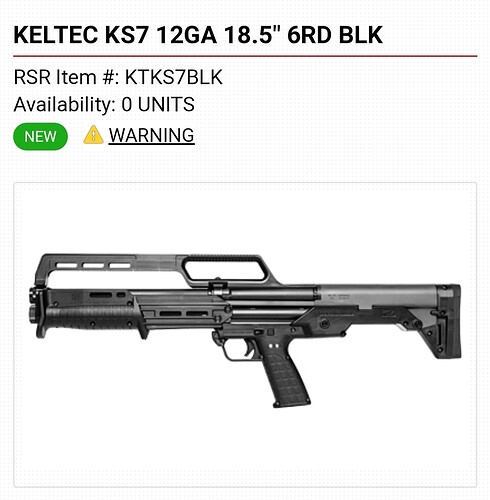 While a bit weird looking (I LOVE IT) it is not that badly priced.

I have a KSG and I am also excited about this one.
Not normally a fan of all plastic guns but, the KSG has been a workhorse.

Personally I have a mossberg 500 rolling thunder. Just the pistol grip, so no buttstock. This cuts down on the length. The rolling thunder has a heat shield over the barrel and a front stabilizer. This really helps with the recoil a lot. I can hold it right up to my face and shoot 3" slugs no issue, and there is no difference in recoil between birdshot and buckshot. Can be had used for 300 or new for 500. Have never had a failure.

I agree. I have a Mossberg Maverick 88, the budget version of the Mossberg 500. I was able to easily swap out the 28” barrel for the shorter 18” barrel. At the time, the shorter barrel was about $80. I don’t know how much they cost now, but I’m sure they’re still way cheaper than a new or even used shotgun.

Cutting a barrel is easy and cheap AND there are instructions on how to do it correctly and legally ALL over the internet.