School shootings are not the result of guns alone, but by the media. They make these monsters rockstars by talking about them endlessly. These troubled kids see this on the news and think, I can be famous.

Another area of concern is the gun free zones. These same kids know the school, they know they will have no resistance, or very little. A while back I talked with Gadi Adelman. He’s an expert in counter terrorism. He has some great ideas that need to be considered. 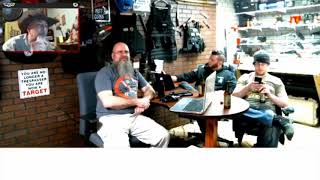 The left talks about how they want to have a common sense discussion about how to protect children in schools and help prevent mass shootings. However, they're not interested in having a talk, only pushing what the

DENVER — People who commit mass shootings in America tend to share three traits: rampant depression, social isolation and pathological narcissism, according to a paper presented at the American Psychological Association’s annual convention that calls on the media to deny such shooters the fame they seek.

“Mass shootings are on the rise and so is media coverage of them,” said Jennifer B. Johnston, PhD, of Western New Mexico University. “At this point, can we determine which came first? Is the relationship merely unidirectional: More shootings lead to more coverage? Or is it possible that more coverage leads to more shootings?”

Johnston and her coauthor, Andrew Joy, BS, also of Western New Mexico University, reviewed data on mass shootings amassed by media outlets, the FBI and advocacy organizations, as well as scholarly articles, to conclude that “media contagion” is largely responsible for the increase in these often deadly outbursts. They defined mass shootings as either attempts to kill multiple people who are not relatives or those resulting in injuries or fatalities in public places.

The prevalence of these crimes has risen in relation to the mass media coverage of them and the proliferation of social media sites that tend to glorify the shooters and downplay the victims, Johnston said.

“We suggest that the media cry to cling to ‘the public’s right to know’ covers up a greedier agenda to keep eyeballs glued to screens, since they know that frightening homicides are their No. 1 ratings and advertising boosters,” she said.

The demographic profile of mass shooters is fairly consistent, she said. Most are white, ostensibly heterosexual males, largely between the ages of 20 and 50. They tend to see themselves as “victims of injustice,” and share a belief that they have been cheated out of their rightful dominant place as white, middle-class males.

“Unfortunately, we find that a cross-cutting trait among many profiles of mass shooters is desire for fame,” she said. This quest for fame among mass shooters skyrocketed since the mid-1990s “in correspondence to the emergence of widespread 24-hour news coverage on cable news programs, and the rise of the internet during the same period.”

She cited several media contagion models, most notably one proposed by Towers et al. (2015), which found the rate of mass shootings has escalated to an average of one every 12.5 days, and one school shooting on average every 31.6 days, compared to a pre-2000 level of about three events per year. “A possibility is that news of shooting is spread through social media in addition to mass media,” she said.

“If the mass media and social media enthusiasts make a pact to no longer share, reproduce or retweet the names, faces, detailed histories or long-winded statements of killers, we could see a dramatic reduction in mass shootings in one to two years,” she said. “Even conservatively, if the calculations of contagion modelers are correct, we should see at least a one-third reduction in shootings if the contagion is removed.”

She said this approach could be adopted in much the same way as the media stopped reporting celebrity suicides in the mid-1990s after it was corroborated that suicide was contagious. Johnston noted that there was “a clear decline” in suicide by 1997, a couple of years after the Centers for Disease Control convened a working group of suicidologists, researchers and the media, and then made recommendations to the media.

“The media has come together before to work for good, to incite social change,” she said. “They have done, and they can do it. It is time. It is enough.”

Presentations are available from the APA Public Affairs Office.

Four traits: being a liberal or democrat.

It’s very simple. Society now does not allow our sheepdogs to be sheepdogs. This allows the wolf’s to prey on the sheep. If we but relied on this country’s original foundation of values there would be far less carnage by the wolf’s. America was born in termoil, and through this we have succeeded past anyone’s expectations. The founding fathers where correct we will only be brought down from inside ourselves BY BEING complacent! Stay vigilant my Brothers and have Hope, Love, and Faith in this Great experiment we are all apart of, and may peace be with you all.

The founding fathers where correct we will only be brought down from inside ourselves BY BEING complacent!

This is so true. There is some irony in that our “freedoms” will end up being our short term downfall–this causes the complacency and the “snowflakiness” we see today. In order for us to come out of it the liberal and socialist point of view needs to be eradicated.

I also want to add that the school shootings and mass shootings in general will almost die off completely if the media quits glorifying it and the perpetrator for ratings.

This is quite true Robert. The only difference now is more people are growing up to believe everything they see and hear without doing any bit of research themselves–and technology is exacerbating the problem. Its become an epidemic of the younger generations–and these snotnosed brats who are kids now are going to evenually become adults and run things.

That should be a sobering thought.

Schools are safer than they were in the 90s, and school shootings are not more common than they used to be, researchers say
https://news.northeastern.edu/2018/02/26/schools-are-still-one-of-the-safest-places-for-children-researcher-says/
The deadly school shooting this month in Parkland, Florida, has ignited national outrage and calls for action on gun reform. But while certain policies may help decrease gun violence in general, it’s unlikely that any of them will prevent mass school shootings, according to James Alan Fox, the Lipman Family Professor of Criminology, Law, and Public Policy at Northeastern.

Since 1996, there have been 16 multiple victim shootings in schools, or incidents involving 4 or more victims and at least 2 deaths by firearms, excluding the assailant.

Of these, 8 are mass shootings, or incidents involving 4 or more deaths, excluding the assailant.

The media and democraps are pushing gun legislation using schools as the focal point.

Liberty Doll posted a video with the truth about this back in June last year you should all watch.
Grab the facts and spread the truth.
Hogg boy and the Bald chick want to play on the public’s misinformation spread by the media.
Fight Back with Facts!!!