Please excuse my ignorance on this question. I have a shot at a couple of series 70 1911 frames.

My first 1911 was a Gold Cup, series 70. I don’t remember if of how it differed from a standard 1911 GOVT.
Now I do know that the series 80 has more “safety” features with the hammer etc. I took one apart to look at it. I didn’t think much of the added parts. I couldn’t care less about the reasoning. We have pistols out there that will fire just by pulling the trigger with the trigger safety.

Personally I prefer the positive safety.

So if I bought these frames, will there be a difference between the series 70 and a standard government frame? As far as using standard parts.

I prefer the positive safety.

And I pinned my grip safety 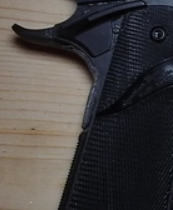 And I pinned my grip safety

Yeah I’ve been poor boying my Limited 10 single stack. We can just call it lazy. Haha
The electrical tape trick. My big hands Will sometimes not depress it on me. 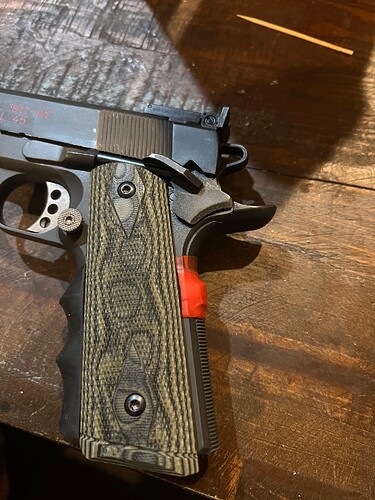 I believe I used a four penny nail to do mine

Series 70 “Style” is perfect for a build, Series 80 you will need a little shim that is annoying but no big deal. Either one will work fine. Built several 1911’s on both styles. Properly fitted grip safety no need to pin.
Very little difference between 1911, 1911A1 mostly sculpting and a different back strap. All parts interchangeable right up to a modern 1911.
Build away, need help reach out. 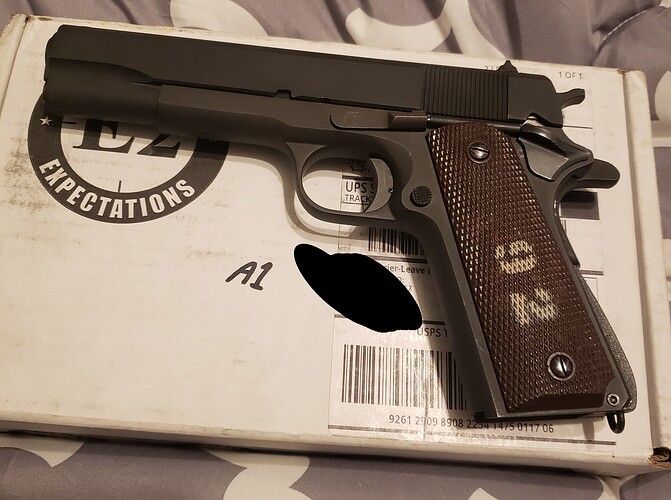 All parts interchangeable right up to a modern 1911.
Build away, need help reach out.

What do you have for jigs / tooling?

What do you have for jigs / tooling?

I have most everything I need. Will be getting a mill soon. My second motorcycle is almost paid off.
Matrix rail cutter. Couple of reamers for short chambers. Stones. Files. I’ve almost finished with my first 2011 that I started watching Mosin’s videos. I put a reverse crown on the bull barrel. I liked fitting the barrel the most.

I tricked out my competition single stack which got me started on all this. I took a basic Springfield and made it into what I wanted. I seemed to have a lot of time on the trigger. It was slow work but enjoyable. Spent enough time on the loads and recoil spring selection that it’s a pretty good shooter.

Now I have a shot at a couple of 1911 series 70 frames. Future work. I can take some pictures of the one I’m working now. Long dust cover slab side.

This grip came yesterday. Aluminum. Still over 200 bucks and that’s a good price. Pretty scary huh?
Fortunately most of my slides and frames were purchased before all this craziness. 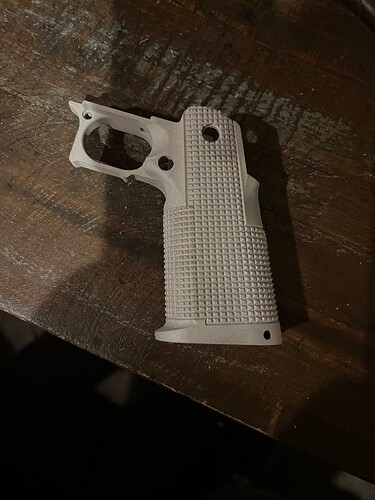 Is that a Black Mountain? If so, I’m surprised you received it.

Is that a Black Mountain? If so, I’m surprised you received it.

grips are the most expensive part. I don’t get it.

Yeah, its held me back from a 2011, a 3d printer might be a wise purchase just for those

2011 grips are crazy.
What mills are you looking at?

2011 grips are crazy.
What mills are you looking at?

After talking to some on here and my Uncle (sold his machine shop and retired), a Bridgeport full size mill, used of course. I’m not driving to Illinois to pick up a mill. My upper limit is around 3-4 grand.
Otherwise this one: I can drive to Denver or Colorado Springs. Driving three states isn’t my idea to follow thru on.
I can break it down into three pieces and load it onto my 1 ton and set it up at home.

PM’s are not a Bridgeport but next best thing. A DRO Bridgeport would be on my list if I had the room and power.

I understand completely. For me, at the buzzer, my hand goes into the high grip as the first think that touches is the wed of my hand.
My hands as XL+, depending upon glove fit for everyday gloves or my riding gloves for a motorcycle.

This high grip coupled with big hands can sometimes prevent the grip safety from depressing. I feel pretty stupid adjusting a good grip trying to get it to fire my first shot. As I developed my grip about the middle of my first year, it failed to fire. It happened again at another match and then again. I liked the stability of my grip and was not going to change it. I just took the grips off and taped in down and put the grips back on.

There’s a reason many competitors pin their grip safeties. It works. Is the pistol safer with a grip safety? Probably. Especially with a three pound trigger or less.