Correct, your right it was.

US Army’s Next Generation Squad Weapon (NGSW) program has produced the SIG .277 Fury and the GD/True Velocity group developed the RM277 bullpup carbine chambering the .277 TVCM.

I am glad that Winchester/Browning didn’t wait on the DOD to screw around and they developed and fielded the 6.8 Western. The 6.8W is a perfected 270 WSM, and I for one am looking forward to exploring its possibilities. Pretty sure it’s the round for my Custom Build.

Since the BCG was a gift from the wife, and even after an explanation she still has no idea what it does, she handed it to me tonight. (We exchange gifts on Christmas eve, her tradition. I bought it, she has no idea what to buy for me and most things I want are far too expensive).

It looks good; just as pictured. I’ll lube and test it tomorrow. Smallish shop which means high QC and pride most times. I expect no issues. I’ll only post again if there are problems since this is a review of Sharps Rifle Co BCG. The company itself did great so that part is over unless there are major problems. I expect none.(Does anyone?)

I dont even lube this one, I do lube the upper tho.
All my buds have them, have not heard a bad word yet.

I lied. No problems and I’m posting in this thread again.

I installed it today and fired a mag through it. It worked fine. But I have a comment on the DLC coating on the JP Ent’ bolt I took out and the real reason for this post… I will never have another bolt without a wipe clean coating. I fired a mess of rounds through the firearm and it just wiped clean. No solvent, just a paper towel and a cotton swab.

We have some of the Titanium Nitride (TiN) too. Like them a a lot, but the DLC better.

The polished Black Nitride is OK, we still have a couple.

Rubber City is supposed to have some space age coating that’s out of this world. Haven’t tried theirs yet.

Yeah, that rifle wears a can close to 100% of the time and you know fast the innards get crudded up with a can. Anyone who doesn’t know, trust me, they get extremely dirty real fast with a can on the end.

I just had to know. Our Products – Welcome to Rubber City Armory

I think the boron something or other coating might also be wipe clean but I have no experience with it. I see no reason to move from DLC right now. I thought when I researched it that DLC was the way to go. I never heard of Rubber City before.

Might try some of this on one just for comparison. Add it to the next order maybe. 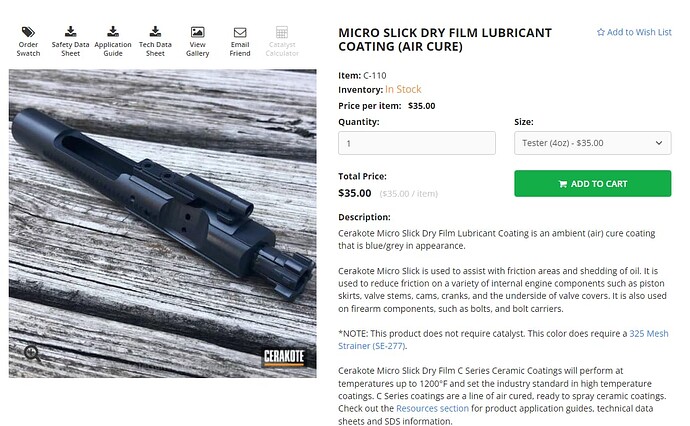 Do you have any experience with it? Esp’ in the BCG area that the piston/bolt/rings rides in?

edit: I think it’s coming back to me now. Did someone else mention it? I think I looked into the application and decided that it was beyond my ability. If it wasn’t I might try it. Maybe someone else will see it and give it a go. I’d like to know how they make out.

I just noticed that they’re now $30 less than when I ordered my first BCG from them a few weeks ago.

I just ordered another one for the desired DLC cleanup on another rifle that wears a can. Bye-Bye mil spec BCG in that rifle! Not bad, what should be a $300 BCG anywhere else for $170. It was a deal at $200. I wish I could get my upper internals DLCed. Self cleaning?

I didn’t mention that when I cleaned the JP Ent’ BCG that I encountered something new to me. I thought I was beyond surprises with the Stoner design since I’ve been using it for 50+ years. I reassembled the BCG and put in the firing pin. I checked to make sure it would dent the primer, I always do. Nothing. It took me awhile to figure out where the problem was. There was a speck of something on the shoulder of the firing pin that prevented it from doing it’s job. Removed and it’s 100% functional now. Just FYI.

No, but I’ve been Cerakoting for a while now, got all the tools, and if I need advice I think @RogueGunnWorks does it so I can pester him. Might as well try one! Couple other pluses, I have several extra BCG’s and a tester is enough to do a pile of them.

Very interested to know how it works out for you.

It’ll be a while, don’t need anything else from them right away.
Usually wait until I need 2 or 3 things, same shipping

LWRC for my BCG

Not familiar with that one, advantages?

Land Warfare Resources Corporation. BCG and rifles are supposed to be the state of the art. No personal experience, second hand word is they are badass. Thousands and thousands of rounds with no issues.

Well a mil spec M16 will do thousands and thousands of rounds with no issues and did.

Frankly, my upgraded BCGs are for cleaning only. They will outlast me by far. It’ll outlast most of us. They’re over kill.

I think their big claim to fame was their self-regulating short-stroke gas-piston system, which eliminated the shitting where you eat DI complaint, especially suppressed.

Yes, a big one is that they are a machined bolt carrier… IE they do not have a bolted on gas key at all. Machine work is perfect, extremely hard nickel boron coating. (I do not try to remove that coating!)
They make both a piston drive (my daily carry) and a DI gun. While I prefer my piston drive, it is the only DI gun I own personally.
100% ambidextrous from the factory, there is very little anyone has to do to modify them from stock.
With that said… I do change the ambi safety out for the ambi Battle Arms Development…
I also change the trigger bow to the Mega Arms unit (they have all vanished now)
Besides that, I change the muzzle device only to be able to use the Yankee Hill Machine QD muzzle brake for my suppressors.
Obviously pistol grip and stocks can be changed according to use and preferences but I find I like the LWRC stocks. Especially their super short setups. (Careful… you can make the rifles “too short”)

That and them being fully ambidextrous from the factory. Along with there near monolithic front rail system. Eliminating the front rail from needing to use the barrel nut for attachment

That I disagree with… they are not over kill.
Being in the unique situation I am in, I have the advantage of actually testing what BCGs can handle.
Placing them into machine guns used in a shooting range by the general public has proven to me that the average BCG can live just past 8 to 10 K rounds.
We have Fail Zero BCGs lasting 100K and the same with LWRC…
We had a Spikes tactical fail at 20K, didn’t even make a year of use.
So this is how I look at it.
My training LWRC has just over 5K rounds through it. Why would I want a rifle that has parts that are already 1/2 way through their life cycle?
Sure, gas rings, springs, extractors… they wear out. Very easy to carry those parts with me. But to have to carry an entire BCG?
With a bolt and carrier lasting over 80K rounds of full auto abuse, I would much rather rely on those parts than something that will not last much more than 10K rounds.
I have pistols with 10K rounds through them. I have rifles with that many rounds through them…
I do not want to be thinking “gee… that is about to fail at any moment”
So I spend an extra amount and get something I can rely upon… more than just making it easier to clean.