Still reading it, but it’s eye-opening at 11 pages in. She sets forth the Georgia Supreme Court precedent for the standard of evidence required to challenge an election as “preponderance of the evidence” to place the results in doubt.

Then she shows that by the Election Board’s own records, 96,600 absentee ballots were requested and counted, but were never recorded as received by the county from the voter. So the voters didn’t turn them in. Who did? A clerical error? What other “errors” are there?

At minimum, 96,600 ballots are in question and should be thrown out as spoiled. EDIT: Biden’s margin of victory was 12,670 votes.

I also didn’t realize that the supposed “water leak” was a hoax. The motive was to evacuate all the observers, leaving a select few working at the machines alone for three hours.

As Dr. Andrew Appel, Princeton Professor of Computer Science testifies, “I figured out how to make a slightly different computer program that just before the polls were closed, it switches some votes around from one candidate to another. I wrote that computer program into a memory chip and now to hack a voting machine you just need 7 minutes alone with it and a screwdriver.”

I see Sidney wants to sell books, because this isnt going to accomplish anything else.

So in Georgia Biden stole it by 13,000 votes with 96000+ unreliable votes in the books most if not all being for Biden. In Pennsylvania Biden stole that state by about 80,000 votes, with at least 750,000 votes recorded in excess of the mail-in ballots issued by the state of PA. There are still other states that have yet to be named. Beginning to look like POTUS is going to be DJT. Just between Georgia and Pennsylvania we are talking about 36 electoral votes.

HAPPY THANKSGIVING!!! except for the turkey.

There are still other states that have yet to be named.

I don’t know the details, but I saw mention of somebody else already taking Nevada to court, over the election results. 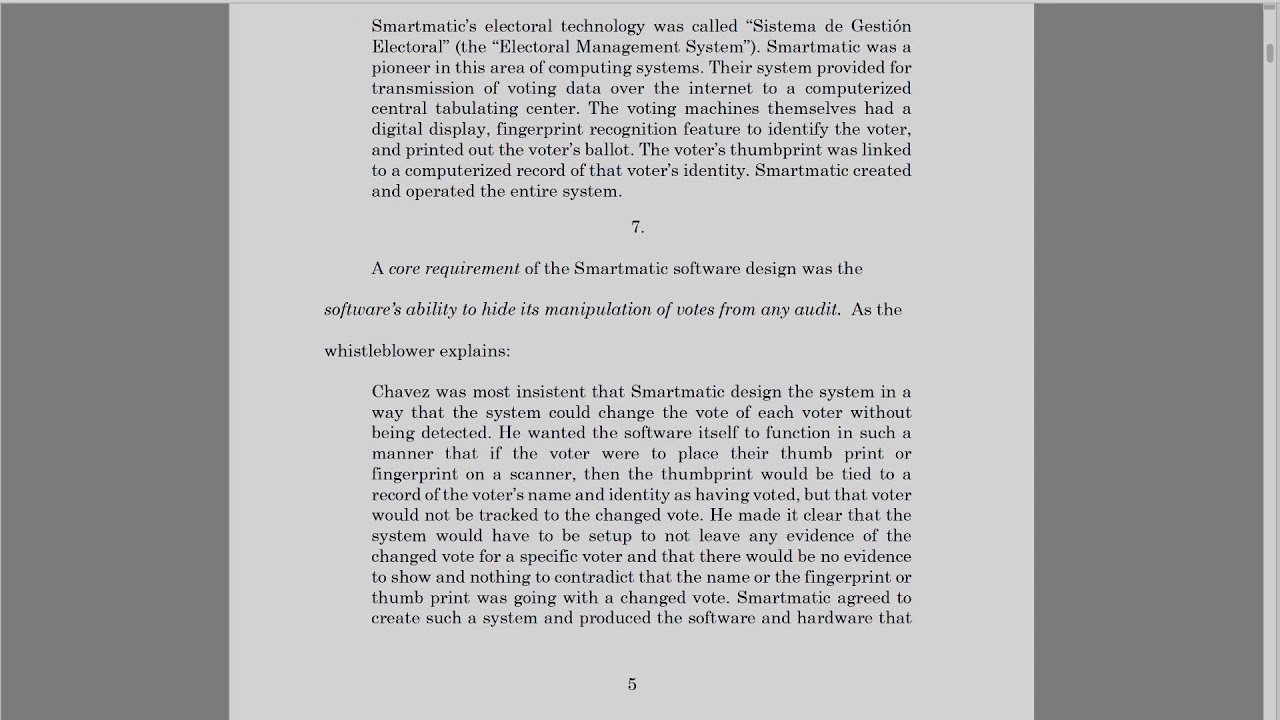 The Dominion voting machines allow poll workers to set how much of a bubble must be unfilled before noting a “problem ballot.” Images of these ballots are then simply put into a folder viewable in the Windows 10 Explorer. A poll worker then must review these images and move them to the appropriate results folder.

However, it is also possible to simply drag the ballot images to the Recycle Bin or use the Windows Explorer delete command. ~ pp. 38-40

Dr. Eric Coomer, Ph.D., who joined Dominion as VP of US Engineering, was recorded at a Colorado Antifa meeting saying, “Don’t worry. Trump won’t win the election, we fixed that.” His social media posts included threats of violence against President Trump. He has since been removed from Dominion’s page of directors. ~ pp. 58-9

Mirror of https://www.youtube.com/watch?v=dh1X4s9HuLo Joe Oltmann's discovery that Dr. Eric Coomer, Officer of Strategy and Security at Dominion, was a virulent Antifa activist. Cited by Sidney Powell...

That was enlightening podcast. I rarely make it through an entire episode, regardless of the content. I did watch the entire episode.
I would highly recommend anyone who wants to see evidence of one of the instruments of election fraud to watch this.
You can also look up Joe Oltmann.