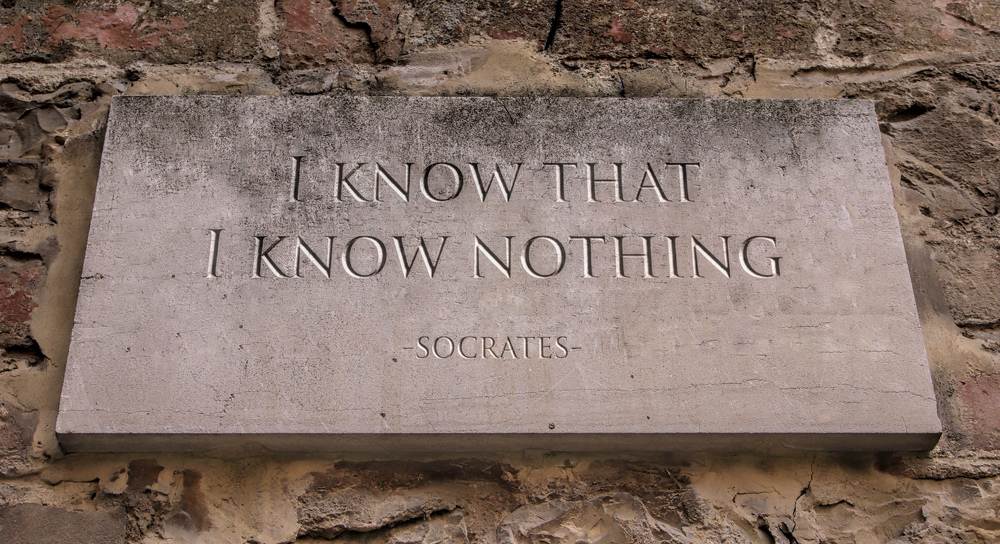 Weird Reason Why Socrates May Have Been The ULTIMATE Prepper! - Prepared Gun...

One of the long-running themes of my blog, Mountain Guerrilla, is the importance of focusing on underlying concepts and philosophies, rather than technical dogma. That applies to shooting as much as it does to preparedness generalities. I am a geek,...

From the article:
(This is only 1/3 of the whole article,I recomend reading the whole thing)
The author is John Mosby of the Mountain Guerrilla blog.

"My goal has been to move readers past the elementary grammar phase (to borrow a concept from the classical education Trivium) on to some of the processes necessary to not just learn and teach those methods around you, but to discover the underlying principles behind those skills, allowing the individual to modify them to fit their specific need, in a way that is “relevant to reality,” rather than fitting the hyperbolic fantasies of dystopian fiction and political pandering.

One of the key elements in achieving this, in my experience, has been the development of a method for forcing myself, students, and colleagues, to think “outside of the box, in order to provide answers to questions that we maybe should have been asking, had we even known the questions existed. One of the most useful is The Socratic Method.

The Socratic Method, or “Socratic Debate,” is a method of inquiry and discussion that serves as a method of hypothesis elimination, through the deliberate asking and answering of questions. It is a tool utilized to stimulate critical thinking, in order to provide clearer illumination, in our effort to reach “better,” if not “best” hypotheses, in the search for solutions to problems. This is achieved, within The Socratic Method, by identifying and eliminating competing hypotheses, among those available, that lead to contradictions.

In its simplest form, The Socratic Method is just a series of questions, with the simplest but most useful, often simply being, “why?” in order to formulate tests of logic and fact. It can help us determine where the line of division exists between the actual facts about a subject, versus what are simply our beliefs—our preconceived biases—about that subject.

Stop. Seriously, just stop. Stop assuming that, because you read a couple of books by “survivalism experts,” that you know everything you need to know about preparedness. Question every conclusion that you’ve drawn from your reading and study. Question the credentials of the experts.

It was pointed out to me once, that “experts” have a lot of knowledge. Inarguable, right? Otherwise, they wouldn’t be experts. The important question however, is two-fold:

There has been a tidal wave of change in the preparedness culture in recent years. The teachers available, in all areas of preparedness, have grown exponentially. We’ve gone from reading books written by people who had read some books, and maybe taken a couple weeks of training here and there, to combat veterans who have not only trained at those schools, but then actually put their training to the crucible of actual combat testing, day-in and day-out, for multiple tours in actual combat, for a decade and a half.

Instead of being limited to reading the pet theories of people who lived on small homestead-type hobby farms, who extrapolated from there, what would be needed for survival in Dystopia, we have the lessons being taught by people who survived collapsed societies firsthand, as well as the teachings and observations of people who are serious enough about living outside of the system that they’ve “collapsed now, to avoid the rush,” living completely off-grid, within the minimum legal requirements of paying property taxes.

There is no reason to maintain the status quo in the preparedness culture, and manifold benefits to upsetting that apple cart, and questioning the basic assumptions the subculture has cherished for decades. The only “authority” we should owe allegiance to, when it comes to being prepared to protect and provide for our families and communities, is the closest approximation to Truth that experience, logic, and reasoning can provide. Any other “authority” should be—must be—questioned, objectively, but incessantly, until we determine that their premises are flawed, and where those flaws are, in order to determine “better,” or “best” alternatives, or until we determine that the premises are—regardless of origin—the “better” or “best” alternatives available.

The Socratic Method offers one means of fulfilling that crucial task by playing “Devil’s Advocate.”

But the powers that be killed Socrates because he talked about it. ;-). Shhhhhhh.

That is why being American is better than being Greek.

Yeah - we don’t need a crowbar to separate the men from the boys.

Yup. The (2) most dangerous words I hear as a firearms instructor, from students are “I know.”

What should be a great classroom portion before range time, can devolve quickly. Interesting and timely read, Thank You. As an addition to any interested would be a read of Plato’s allegory “The Cave”.