Something to think about, and some of Us are closer to this topic

I opted to take mine early at 62, I took a decrease in it, but it was like give it to me now. forget waiting five more years. it wasn’t a huge difference anyway. the first year I spent most of it on ammo. I kept the UPS and sgammo in business.lol

76 years average life expectancy I don’t blame you. Plus depending on were you live in the United States you might have nearly a 55% chance of chucking it in due to a massive coronary in the next 5 years. Eat drink and send lead for tomorrow we die.

I opted to take mine early at 62, I took a decrease in it,

I did too, and there was a very good reason for me doing so.

Years ago I learned that the go’vermin scam with SS was that they knew that statistically folks would die approx’ 6 months after the start of collecting at age 65. Now “they” are claiming that people live longer since the average age of death in this country has risen. That’s pretty much a lie. The average age of death is an average of the entire population, newbies, to folks who die of old age. Now if premies live longer that drives up the average age of death. That’s what happened, at least as of 10 or 20 years ago. But the go’vermin quoted it and used it to convince older folks to put off collecting benefits until they’re older. What that means is that more die w/o collecting since the average age of old people dying hasn’t changed all that much (the overall average has). I told that to a co-worker 13 years ago, who was about to retire. He argued and argued with me. I don’t know if he couldn’t understand, or didn’t want to understand. He also told me that ,“Look at all the old people! There are more alive today than when I was a kid!”. “Yup, there sure are. There are also far more people alive on the planet today than back then.”, I told him. Just a tidbit… there are more people on the face of the earth today than has ever walked the planet in it’s entire history. True. So yes, it follows that the # of old people would also be greater.

Anyway, he retired and I was happy that he was going to enjoy some of his golden years. However, he found out that he had pancreatic cancer and he died… (wait for it) 6 months later. True story. All those years of paying in just so that politicians could use the $ to buy votes to stay in power. So when I reached 62 I decided to collect since statistically my family genes don’t yield long lived people. But I had my genetic health problems and they’ve been sorted out AFTER the fact. Now I might live a much longer life. But I’m screwing “them” every additional day that I collect. Actually I’m not, I’m just part of the overall impersonal statistics and I’m taken into account as is the premie that lives instead of dying. So are my brothers since after my health incident (heart disease and a heart attack) one brother got checked out and taken care of it BEFORE his that was due, and another brother did much the same. The youngest had his episode 20+ years ago. Yeah, genetic, dad died of one and as I found out later, grandad too. If we had only known maybe we could have gotten a group rate on the surgeries since it all happened a month apart.

And these governmental morons mismanaged the money and stole from the system, so that it’s now going broke.

I disagree. They know what they are doing. It is designed this way. It is modeled after Charles Ponzi. Early payers are supported by later payers. Social Security is one the worst things ever, and it is stealing.

I’m 40, and not planning on seeing a dime of ss back. It’s a foolish system from the get-go that govt didn’t need to take part in retirement

I disagree. They know what they are doing. It is designed this way. It is modeled after Charles Ponzi. Early payers are supported by later payers. Social Security is one the worst things ever, and it is stealing.

^ This. It is a big Ponzi scheme… haha and most Americans don’t even know it.

SS like a lot of things could have been a great thing, but criminals will figure out a way to abuse it, I will apply for mine at 62 so hopefully I can use up as much as possible before I go the big demoRat shooting range in the sky…I have pre-planned to have at least 50 rounds a day to shoot for at least 10 years, after that I will beat them to death with the jawbone of an ass…

jawbone of an ass…

So…Bloomberg the hobbit is going to lose his lower jaw?

he will think Hellraiser is a game show… 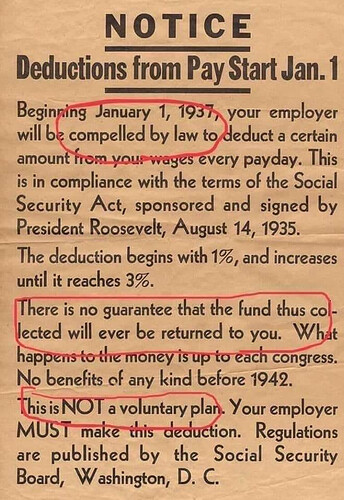