Starlink - Redneck meets high tech... or so I am told

So we moved again, bought a new place, took 7 months to find one, unreal what it takes these days, unreal

So when we left the UP (thank you God) I changed the address for my Starlink service and put it in stow, when I did that it said no service at that location, with other things to worry about I dismissed it…

I won’t say it was quick, or without frustration, in fact I could say what I want as a bulk of the customer service was removed , a total of six replies look like this now

which I was surprised by, but those likely all contained my address and it sure would be nice if more companies showed the same concern

So the nitty gritty, I was dismissive of the location originally as this is the best damn internet I know of, and you can get it in Ukraine from what I hear, so why should I worry about not being able to get it in NMI?

Well a closer look reveals why, white circle my location, and light blue is available locations

Why Ukraine and not NMI… IDK

He said there was an update and wait another twelve hours and I should be good to go, which I did, and am, sure is great to be back online, and even better to get actual customer service too, lol, in my view it was better than a phone call from Pennsylvania ave 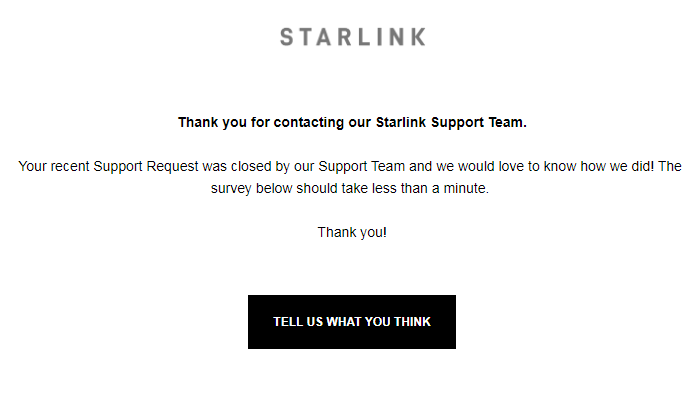 lol, less than a minute for sure, that was the entire survey

A friend in NE Texas is on the waiting list. He got an email for the StarLink for RV and ordered it. It came within a week. He got it set up last night and got this as a top speed.

Well a closer look reveals why, white circle my location, and light blue is available locations

I’ve had Starlink for about 2 months now. I live in a “waitlist” area just South of you, but it’s working well for me so far. Speed are highly variable, but much faster than my old dsl service.

When you got your email invitation how much time did you have to accept?

I don’t recall exactly, but they wanted a quick response.

I wanted to go with Starlink but it’s not available here and probably won’t be for at least another year. Even then, when I looked at the prices, I about shit myself. Don’t think it will be a viable option for us.

when I looked at the price

I agree. $110 is a bit steep. However, I was paying $95/month for lousy rural DSL service ($55 for internet plus $40 for the phone line). I am hoping that prices will drop as Starlink grows.

hoping that prices will drop

Don’t count on that, they went up recently, and the portability option costs extra too, is what it is

For decent hi speed internet in BFE I’ll pay what he wants.
Better than anything available out here at any price

I agree. I believe you can even do an Internet Phone and ditch the land lane or maybe reduce the cell bill.

I for one am looking forward to it better speeds and paying for it by slashing our cell bill. Unfortunately we need the mobile version so there’s that bit extra.

AND whatever channels you want to watch

Absolutely. Even when Starlink is running a bit slow (50 Mbps), I can stream content without the constant buffering. I am happy to empty my wallet when the needle hits 200 Mbps.

My previous DSL service was 10-15 Mbps. I was lucky to have that option in my rural area, but it was painfully slow sometimes. It was more like dial-up internet when everybody was working and schooling from home.