So, I am slowly getting back into reloading. I’ve been reloading 9mm since that is what I shoot competitively in USPSA. That also happens to be the only set of dies I own.

I also just “inherited” a S&W .357 revolver from a family member. Beautiful gun but ammo for it is currently stupid expensive.

I know 357, 38 Special and 9mm are all similar diameters and the Lee die sets let you load both 357 and 38 with the same dies. My question is could the same also be done with the 9mm die set? Considering case length, I think 38 Special would be a better possibility but I’m wondering if it could be done at all. If it’s possible, I would just need to get my hands on the brass.

Or should I just quit being cheap and splurge on a set of 357/38 dies?

I don’t reload to answer 100%, but that answer is often the right one

We have both but don’t don’t reload or shoot 9mm… yet. We are planning on taking it up. Shooting it 1st that is, loading to follow. The wife wants a new purse gun, and I just want to get into both sides of the 40 i.e. shoot 9 &10mm. They are both Lee dies bought when there was deal.

Thanks for the input. I thought it might work but wanted to get opinions from those more experienced than me. At one point I did have a set of 38/357 dies but sold all my reloading stuff when I moved. Now I’m rebuilding and trying to get an idea of what I need compared to what I think I want.

Get the correct dies, crimping becomes important when loading full house 357 loads…and they are only about 40 bucks from MidwayUSA…

I like the Lee Turret for Pistol and Semi Auto Rifle. Set up a plate for each caliber. I use a RCBS Rock Chucker for Bolt Action Rifle. Someday I may get a progressive too. These work for me so far.

I like the Lee Turret for Pistol and Semi Auto Rifle. Set up a plate for each caliber.

This is what I have. Eventually, I will get another plate but just getting the dies for now would be sufficient. I know it’s a PITA taking them in and out but this is still a step up from what I was using last year at this time. All I had was a Lee hand press.

Also I would not use 9mm bullets to load for .38 as they are different diameters. You can do it but they will not be very accurate.

Interesting food for thought. I know I’ve loaded 38’s with 380 before just because I ordered them by accident. (I really gotta work on reading comprehension!) They worked OK but nothing to write home about. I was always under the impression that these 4 were the same diameter and it was just case length that made the difference.

I like the Lee Turret for Pistol and Semi Auto Rifle. Set up a plate for each caliber.

This is what I have. Eventually, I will get another plate

I have a Classic Turret and I’ve been happy with it. I use it for miscellaneous low-production calibers. It has the auto-index feature, but I’ve never used that. For me, I prefer to use it like a single stage. It’s nice being able to swap turret heads for each caliber.

I’m not sure about the long-term quality/durability. I will never load high volumes through that press, so it should last a long time for my purposes. I use the Dillon for large production runs.

I’m not sure about the long-term quality/durability.

I’ve never had an issue with Lee’s presses. Some of their other stuff they went cheap. Any of the plastic stuff is crap. The primer loaders and the new design for the “perfect” powder measure come to mind. The presses and dies themselves have always worked well for me. Granted, I do a limited amount of reloading but I don’t expect any issues with the main components.

I have had better luck with RCBS or hornady dies . The ammo I load just seems to function better than what I do with lee dies.

That Lee factory crimp die sure works well for my semiautomatic rifle reloads.

I like Lee a lot, we have Lee dies for everything we shoot. Every single cartridge also has a collet factory crimp die.

We use the Classic Turret Press for all pistol and non precision loads. We have 9 turret heads set up.

We use the RCBS Rock Chucker Supreme for precision loads. Both presses use the Consistent Crimp Torque Lever arm and we crimp everything, even if only slightly.

We have a few RCBS and Hornady dies but like the Redding S dies and moving that way now. We also use the Redding Competition Shell Holder Sets for every casehead family we have (5). They work really slick with the turrets. Using them we can change the headspace without adjusting the dies in the turrets heads.

Our operation would benefit from primers and powder at reasonable prices instead of the Demonrat induced hysteria pricing we have now.

Lee dies and turret heads allow us to be able shoot a variety of cartridges and load em efficiently.

Titan Reloading has be come our goto equipment supplier. Amazon or better prices with Mom & Pop service. Can’t say enough good stuff about them so far. They also sell the Consistent Crimp Press Lever Arm which will reduce your group size and lengthen brass life using it with collet neck and crimp dies. 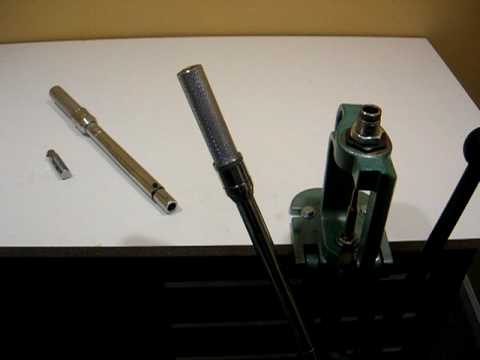 Today I shoot too much to use my single stage press for loading production. I kept telling the wife decades ago when she’d ask about Christmas, “No I don’t want a Dillon. I’ll stay with the RCBS Rockchucker.”. Then I started to shoot competitively (again) and the single stage just couldn’t load the volume I required. Back then Dillon was THE progressive press, and frankly Dillon has taken care of me when I needed parts. I’d get another Dillon again in a heartbeat. The stats of competitive shooters shows Dillon to be by far the progressive press of choice today.

But when I buy their die sets I also order what I need of LEE Factory Crimp dies. I learned to cast bullets using possibly the most difficult projectiles to cast, with a LEE #4 buckshot mould. It’s still my buckshot mould today and I get good casts from it. Not everyone can do that. It was a good mould to learn on since it was so difficult to fill out the mould every pour (not a fault of the mould, but it requires very specific ways to handle the casting). But the knowledge gained made bullet casting later on soooo easy!

BTW, I still have the RCBS press and it’s been in use for 50 years and is still going strong. It’ll easily outlive me. Today I use it mostly for sizing cast coated bullets. The thing’s a beast! I’ve gotten my moneys worth out of it. At the time I bought it it’s probably cost me less than $.50/year of use. I know it’s produced many 10s of thousands of rounds. Of course the Dillon will out produce it, but a progressive press is NOT for a newbie. Fully learn the craft first and then maybe (and be honest!) once one actually has a really good handle on handloading that might be the time for a progressive press. By handloading I DO NOT mean merely cranking out ammo that goes bang. Anyone can do that, and get into trouble. One must actually know what one is doing and folks give themselves far too much credit for what they don’t know.

Decades ago I knew a family with a young son who had huge confidence but little knowledge. He used his own $ to buy a Dillon 550 as a first press to load .223. He went to the loading charts and loaded max’ loads, no testing, just loading. He’d run out of one powder and buy what he could find of the next listed max’ load. He never labeled anything, so disassembly of the rounds would have been impossible so as to not get “tutti-fruity” powder. I tried to tell him, but he knew more than I did. I wish him well. They moved so I have no idea what happened. No one wants to be him. True story.

I love my Dillon today, and I borrowed that childs Dillon for a weekend decades ago. But learn the craft first before pushing production.

Dillons clearly are pretty good and I could see getting one if our volume got up to the point it would be needed or really useful. Our precision rifle loads could possibly be reproduced with one but I’m unconvinced.

The Rocker Chucker with the Consistent Lever Arm is pretty hard to beat. So far the Lee classic turret volume rate is more than enough for what volume we shoot, especially here lately.

The ability to set the heads up for the different calibers (cartridges) and to use the Redding holders for setting different rifles’ headspace, coupled with the Consistent Lever Arm’s low tech repeatable and incredible results is also pretty hard to beat for accurate volume production.

What we’ll probably get first though is a couple of Lee cheapies for depriming and priming.

I admit to thinking about a Dillon for years, but never have quite justified it… yet.