I think this is the first post for this new project. I have six brand new 30 round AK mags that I am donating to the site. The idea is if you are interested and want to buy them just post a price that YOU can afford. If someone can afford more, just post it. Go about a week I think would be long enough.

I bought these mags from a local tactical store before it went out of business. I don’t even own a rifle for them. The price was too good. They are not metal but are probably the non- metallic stuff that magpuls are made of. They have never been used.

Send me no money. I want you to donate to the site, the agreed amount. I will box them up and send them to you.

I have more items to post as well. I don’t know, just throw in five bucks for shipping or whatever. I don’t mind paying for it, but that’s just me.
No, the 2011 frame and slide arent coming with them.

Just use the Donations 🤑 link.

Oh man. I actually found an aluminum 80% 2011 from an acquaintance a couple of days ago so that gives me four customs to build now. Not having my mill yet won’t stop me.

And you don’t drink or hear voices, right?

I know nobody else bid. was tryin to get it goin. but nobody wants AK commie gun mags. lol

How about a picture of the front where it locks into the frame and the feed lips.

How about a picture of the front where it locks into the frame and the feed lips.

Here you go. Never used. Just not going to build an AK. Don’t even know if they are quality or not. The AKs I shot were all metal mags. One AK I shot had two modes, safe and full auto. Didn’t even have a semi position. 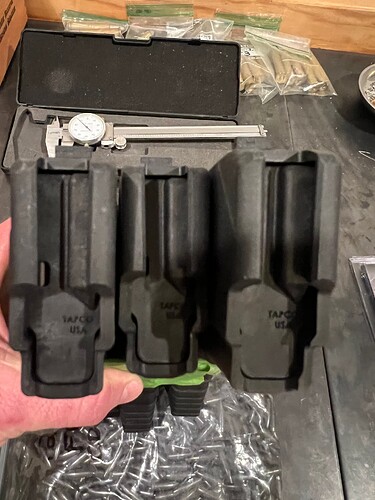 I will take your word for it Robert.

And you don’t drink or hear voices, right?

Is that a problem

Hmmmmm. lets see, should i?

Cant mailem to me behind the wire. dont have an AK either.
Cheapskates the lot of you

Those all polymer mags don’t last with use. The lugs on the front tend to brake off. For spares in case all my others are gone is ok.
$30+$10 for shipping.

wow, that stare from Belt-Fed must be cold as ice