Has anybody on the forum had a tax stamp for a suppressor approved in the last year ? if so what was your wait time ? I am over a year for two suppressors…

Lo and behold, after I made this post I called Dealer again and now suddenly they have my Stamps and I can pick up the suppressors…makes me wonder what kind of business they are running, the past calls I was always told the NFA guy was not in the office…called 4 or 5 times over last 6 months and emailed…I don’t see me doing business with them again.

Obvious question… Did he have your phone number?

Or maybe you just caught “vibes” in the ether. That happens to me all the time.

How would they make out by holding onto the returned stamp? They obviously had the paid for item in hand to have the serial # for the p’work, you paid for it, but there was nothing they could do with the items themselves. I don’t see how they benefit but I can be quite naive when it comes to criminal enterprise. I see nothing but negatives if they hold onto the tax stamp(s) and no benefit at all for them. Maybe they’re weird and like to have a safe full of items being held for ATF ransom?

who knows, once I pick them up Saturday and see the date on the stamps, then I will know more, If they are dated months ago I will be asking some serious questions…

I haven’t been playing the stamp game, but I’ve been hearing people complaining about wait times going over a year, in the last year or so. No pattern to it, though, as other people are saying they got one in 8 months or less.

Originally, it was a law to discourage people from having them, due to the high tax ($200 in 1934 was a lot of money) and the matter of government looking into what you were buying. $200 isn’t as steep a tax, now, and people have been conditioned by things like NICS, so the wait time is the remaining big hassle that keeps most from getting involved in stamp collecting.

Think about it. If you knew you would have your stamp in a couple weeks, how many more people would be getting stamps? If the system was driven by generating revenue, the wait would be down to less than a week, by now, but this particular system is driven by a goal of preventing people from getting stamps.

I understand a lot of it is red tape, this will be my 4th and 5th ones, but if the dealer got my stamps months ago then that is a different story…my first and second suppressors were within 9 months and my SBR stamp took 4 months. I too have seen wait times all over the place in the last couple years.

I wonder if in the ATF world how many people are anti-gun and purposely delay things, not enough to clearly break the Law, but enough to clog the pipes. After all so many of those employees are just clerical and probably don’t even own guns and no doubt hate Trump.

A few years ago, one of the higher ups in the ATF wrote something recommending that suppressors be removed from the NFA and switched to the same regulatory status as rifles or shotguns.

He laid out his arguments in a logical manner, explaining that the cost to the government, in processing the tax stamps and maintaining the records of suppressor transactions, exceeded the revenue that was collected from each suppressor transaction. By shifting them to the lower regulatory status, the government would still collect tax revenue from their sale (the federal excise tax that is collected on normal firearm sales), but the government’s cost in regulating those sales would be greatly reduced. The shift would also reduce the load on the NFA branch (which had been complaining about their workload, as an example of why they needed to upgrade the NFA registry to a digital system along with the old records), allowing them to concentrate on the more important items to regulate, such as full-auto, short-barreled rifles, short-barreled shotguns, destructive devices, and so forth.

Makes sense, doesn’t it? Could even lead a person to suspect that maybe he is somebody that is on our side, quietly trying to make a difference from the inside. There have been other little things that have led to people speculating that maybe there are some pro-gun people inside the ATF. But then why haven’t we heard any more about the ATF pressing for suppressors to be moved to a less regulated status?

A few decades ago, somebody in the FAA came up with a suggestion to help clean up their records and lessen their load. People who have a certificate from the FAA are required to notify the FAA when they change their address. Pilots, mechanics, and other ‘certified’ individuals have to keep the FAA up to date on their current home address, so that the FAA can keep track of them to some extent. However, who is supposed to notify the FAA when they die? What about when they retire and no longer have anything to do with keeping their certification current? There really isn’t anything to keep track of them needing to be removed from the FAA’s records of active certificates, unless the certificate holder takes it upon themselves to go to the FAA and surrender their certificate (there’s no expiration date).

How to fix that… Somebody in the FAA came up with a surprisingly efficient proposal. Just send a card to each certificate holder’s last address in their records, telling them to return it after marking that their address is still current (or providing their new address), and send a new card every few years. After three cards have been sent to a certificate holder and not returned, they would be assumed to have died or left the industry and not complied with the requirement to update their address, and their certificate removed from the active records.

Simple, nearly foolproof, relatively inexpensive, and would eventually save the government a lot of money. Should be worthy of a note of praise in his file, right? No reason for a response like:

When have you ever heard of federal clerks doing anything that could be used as justification to reduce funding of their office?

Well since it worked for you @rjburk I’ll chime in. Filed in February 2019, sent a personal check to cover the stamp which the feds cashed about June 2019. Was in the shop where I bought the suppressor and, it awaits in his safe the second week of January 2020, no news yet from the feds and no call from the gun shop.

I did hear the E4 will be coming out but no idea when??

no rhyme or reason…

My check was cashed 12-23-19. I’ll let you know when it’s approved. First stamp so the wait is killing me. I heard it gets easier after a few.

Picked up both my Suppressors today, There was a few days shy of one year between the day I signed forms and the day ATF signed off on Stamps. then almost a month before dealer got them ? this was a snafu and the dealer I used to transfer I think did not send my forms in right away and also did not notify me as soon as they got the stamps, no way to know for sure, but I probably won’t be paying for anymore Stamps in the near future. 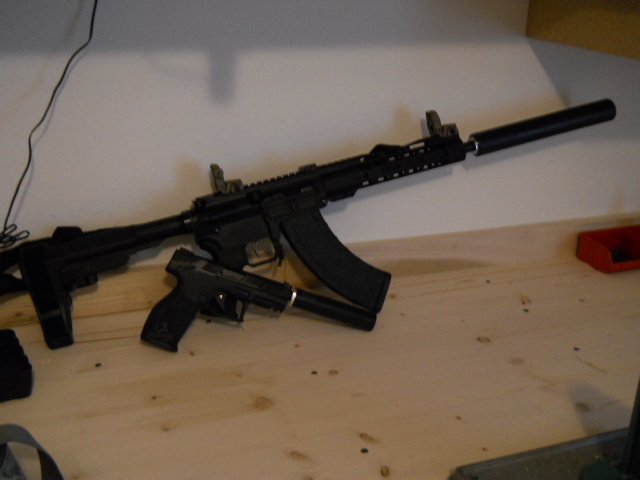