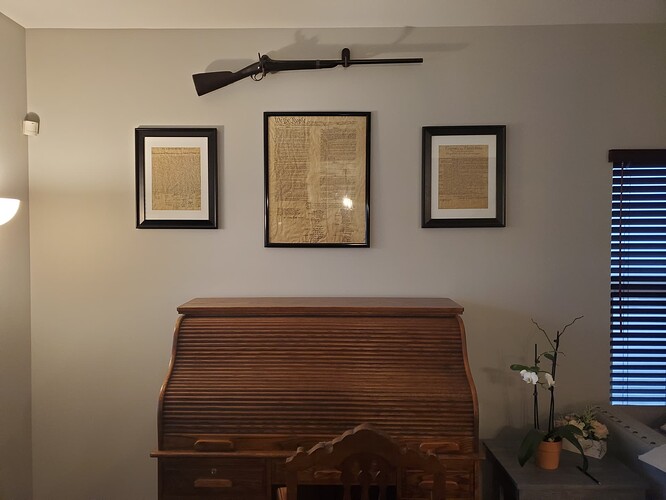 20210813_1840281920×1440 123 KB
My father-in-law gave me this black powder shotgun. I’ve had it a while and thought it’d look cool hanging over my copies of our founding documents (Declaration, Constitution, and Articles of Confederation). So, after getting them hung, I started polishing this rusted old beast up and finally found a useful stamping on the barrel - ZULU.

This was probably made around 1860 - 1870 near the end of the Franco-Prussian War. It started its life as a rifled, muzzle-loading musket, but at the end of the war breech loaders were becoming popular and the manufacturers were stuck with a bunch they couldn’t sell.

The breech was hacked into place, but nobody wanted to buy a modded gun when they could get one built proplerly for about the same price. So, finally the manufacturers cut down the stock and barrel, tacked a bead on, and bored out the rifling to turn it into a shotgun.

A ton of the Zulus were sold to native Africans in order to help them harreass the British, while quite a few were also shipped to America and sold to American Indians as a low-cost entry into gun ownership.

Based on the fracture in the stock near the breech, and stress fractures in the breech itself, this particular gun saw a lot if use, or frequent over-charge. Either way, I thought it was an interesting history lesson, and it does look pretty cool hanging in my front room.

Very cool piece of history you have have hanging there.

Declaration, Constitution, and Articles of Confederation

Belt fed used a few of those when they first came out.

Jeez. That must’ve been right after they used to hunt for lunch on the backs of dinosaurs.