That did not take long

Today Biden came out and said he wanted Congress to pass gun control measures that include an assault weapons ban , a high capacity magazine ban and universal background checks and making it where firearms manufacturers can be sued when thier products are use illegally. I swear this asshole is going to start a civil war. If they think Jan. 6th was bad what do they think will happen if they try this stuff.

I swear this asshole is going to start a civil war

I think the left has been trying to push a civil war for some time to excuse implementation of martial law. Fortunately it failed thus far. Left has been trying to pit blacks against whites-didn’t work. Then blacks against law enforcement, didn’t take off as they’d hoped. Then again tried pitting left against right. Assclowns keep trying, we need to keep our cool as long as possible.

What we need is to force the rank and file law enforcement and military to say if they will back it or not. Not the political appointees but the ones that swear to uphold the constitution and would be ordered to enforce this unconstitutional crap.

I agree it’s time to have that conversation! The garbage politicians have more than tipped their hands showing their disrespect & hatred for LE & our military. LE & our military NEED TO speak up NOW & chose a side, the side of WE THE PEOPLE!!

The military can’t speak up. They will be relieved of duty in a heartbeat. Commander in chief is commander in chief. He will just releive as many as he needs till he gets some suckass that will follow his orders.

The Police and military will not be on our side.

True but they can legally refuse to carry out unlawful orders and he may be comander in chief but they all ultimately work for us. If he trays this he needs to be impeached for trying to take rights away from us . I feel he has gone way to far already it is time for them to feel the wrath of the people they are trying to oppress.

I swear this asshole is going to start a civil war

I swear this asshole is going to start a civil war. If they think Jan. 6th was bad what do they think will happen if they try this stuff.

They are Marxists trying to burn the current system down to build up a new one.

True but they can legally refuse to carry out unlawful orders

and what constitute a unlawful order - no knock warrant? Describe to me what is the difference between lawful and unlawful. That catch all term is usually provided by the armchair commandos, hours, days, weeks and even years after the event.

Describe to me what is the difference between lawful and unlawful.

A violation of the Constitution and the Bill of Rights would do it.

and what constitute a unlawful order

Well theres the law based off the U.S. constitution and the law currently being used by the government. I can see that being a moral issue for them in the future when acting against U.S. citizens. I mean are you a hired mercenary soldier/cop or a patriotic citizen doing his duty? Glad I am not the one stuck trying to choose sides like that.

and making it where firearms manufacturers can be sued when thier products are use illegally.

I posted about this very thing almost 2 weeks ago on .308AR. He’s gonna have a pretty tough time pulling that one off, based on what the PLCAA actually is. Here’s my thread on that stuff:

The Protection of Lawful Commerce in Arms Act

I didn’t say they would follow orders to go against the public. I just said they can’t come out publicly without being releived.

And, FWIW, I don’t know too many military brothers that will take up arms against ANY of the US Citizens out here. Not gonna happen. I don’t think that they’ll issue those orders, and find the .mil guns pointed where they wanted/expected them to be pointed. Would be a rude awakening for them there politicians, issuing such orders.

Then, just count the military retirees and former service members - all Veterans. They don’t want to awaken that sleeping dragon, right there. 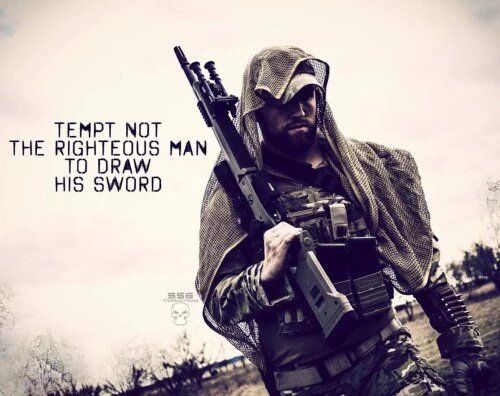 I can see that being a moral issue for them in the future when acting against U.S. citizens.

It’s not. It’s pretty clear-cut, when you’ve done it, sworn to that oath, in uniform. Sure, there are bad apples, but to most, it really means something. It means even more when you’ve pushed that limit to it’s very edge, and been placed in situations where you’ve come to the conclusion that you will actually die for it, of your own accord.

There’s a very real reason why that first part - is first. That is the paramount statement, right away. Just like the First Amendement is the 1st, and the Second Amendement is right there behind it.

An unlawful order can come from what many of us belive is an illegitimate president . There are still too many unanswered questions from this last election for us to allow him to tear our country apart without a fight.

Sure, there are bad apples, but to most, it really means something.

You’re forgetting about the blue pill

Domestic Violent Extremists Will Be Harder to Combat Than Homegrown Jihadists

The beliefs driving today's domestic extremists are deeply rooted in American history and society. For this and several other reasons, shutting them down will prove far more difficult than combating homegrown jihadists.

If you’re in uniform and assigned a mission to take out a DVE cell, aka homegrown jihadist , you’ll do it, if not, you become a sympathizer, you’ll receive your just deserts, your family will be stigmatized,

I have more faith in my brothers in arms, sure some will go along I served with some assholes but I think most will do the right thing. When someone has risked their own life and never seeing their family again to serve their country, they are not going to hand it over to a bunch of commies.
. Also bear in mind most of the military supported and loved Trump and they can read the writing on the wall with Biden at the helm.

I sure hope you’re wrong. When I was in and that was decades ago I don’t think any of us would have. I know I wouldn’t have. But I would have turned my m16 on the person giving the order and then followed that order all the way to the source. Courts martial? We don’t need no stinkin’ courts martial.

I don’t think they’ve had enough time to totally spoil the folks wearing a uniform… yet. Nazi Germany was able to do it because they had years of militaristic indoctrination and while that’s happening here in the schools I’m hoping those brainwashed kids aren’t old enough to wear a uniform. If they are I’m hoping that they can’t find their way out of their mommas basement.