America has an undeniable love for quarter-bore cartridges. The last century—in spite of the multitude of new cartridges bursting on the scene—saw the .25 caliber cartridges not only surviving, but enjoying quite the following. From the .25-20 and .25-35 black powder cartridges, to the .25 Remington, .257 Roberts and .250-3000 Savage, the virtues of the .25 caliber as a crossover bore from light big game to varmints was quickly evident.

Anyone who has ever read anything about hunting rifles has heard of the .30-06 Springfield; so big was the splash when that cartridge hit the scene that—whether anyone wants to admit it or not—it remains an absolutely universal choice to this day. That case has been used for wildcat cartridges, with varying degrees of success, for bullets ranging from as small as .22 caliber to as large as .416. The .270 Winchester, .280 Remington, .338-06 A-Square and .35 Whelen are all children of the .30-06, and have made a good reputation for themselves.

Mating the .257-inch diameter bullets to the .30-06 case dates back over a full century now, with Charles Newton mixing the two components in 1912, and when A.O. Neider introduced the .25 Neider cartridge in 1920. While our modern, commercial .25-06 is essentially identical to the .25 Neider of 1920, it would remain a wildcat until man walked on the moon. Remington has had an aptitude for picking up those wildcats that have proven themselves, and turning them into commercial gold. The .22-250 Remington, the .35 Whelen, the 7mm-08 Remington, the .280 Remington, and the .416 Remington Magnum were all rather successful before being adopted and given the Big Green moniker, and the .25-06 is no different.

Structurally, the .25-06 uses the same datum line—the distance from the base of the case to the shoulder—as its parent does, as well as the same case length of 2.494 inches, but the SAAMI-specified cartridge overall length is a bit shorter than dad’s at 3.250 inches. Being a .25 caliber, the .25-06 has an effective bullet weight range of between 85 and 120 grains, making for a perfect rifle for double duty on varmints and predators. It runs on a standard large rifle primer, and has a case capacity that is more than likely the tipping point for .25 caliber cartridges, before things get grossly overbore. The .25-06 will generate respectable velocities, driving the 85-grain pills in excess of 3,600 fps, and the heavy 120-grainers to right around 3,200 fps.

This combination makes a good hunting cartridge—out to sane ranges anyhow. It’s true that the 6.5mm bullets possess a much higher ballistic coefficient—and much of that has to do with the twist rates prescribed for the two different bore diameters—and considerably more weight, but that doesn’t make the .25 caliber cartridges a bad thing. In fact, I feel that the .25-06 Remington and .257 Roberts make a better choice for varmints—especially for any high volume work—than any of the 6.5s. When game gets larger than deer, I feel that the 6.5s, with the 140, 156 and 160-grain bullets, shows an advantage. I think the .25-06 compares favorably with the 6mm cartridges, offering a heavier top end of the weight spectrum, yet the petite 85-grain bullets still handle the predators nicely. 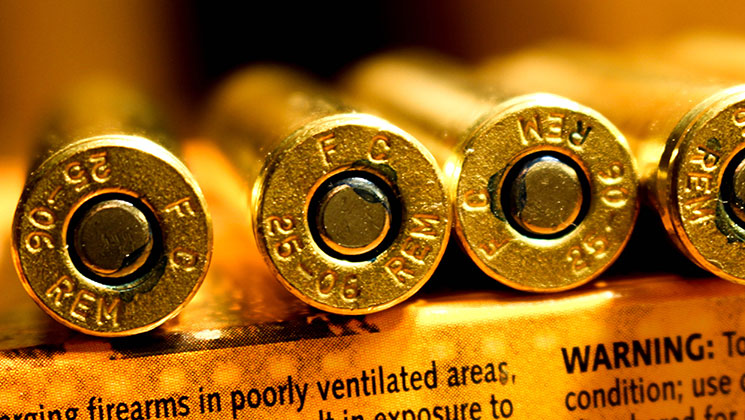 If the .25-06 was a good cartridge in 1920 (and it most certainly was), it’s a better cartridge today, as it benefits from modern slow-burning powders and premium projectiles. Classics like the Sierra GameKing, Nosler Partition and Hornady Interlock are certainly available, as are the Barnes TSX and TTSX, the Swift A-Frame and Scirocco II, the Hornady SST, GMX and ELD-X, Nosler AccuBond and many other great designs. The stiffer projectiles will handle the biggest deer, and I know folks who use it for elk, though I personally would prefer a larger hole in the end of the barrel. Though you may doubt my word, when I hunted bison in South Dakota, my guide carried a .25-06 Remington, insisting he had plenty of gun (for the record I had something much larger).

Looking back to those velocity figures, one would think that the .25-06 Remington would make a perfect candidate for the long-range shooting that seems to be preoccupying everyone’s minds these days. However, the common twist rate for the .25-06 is 1:10, and that’s going to limit the weight of the projectiles that the cartridge can launch. Again, we’ve got plenty of velocity and case capacity, but if you can’t stabilize a bullet of appropriate ballistic coefficient, you’ll see that with 750 yards.

So, where does it fit in? Well, I think it makes a very good deer cartridge, giving great accuracy, a flat trajectory and enough bullet weight for any shot angle. In a seriously windy situation, even the 120-grain bullets may have some issues when compared to the 7mms and .30s. It’s definitely heavier in both the recoil and horsepower departments than either the .22 centerfires or 6mms. But, I feel the .25-06 makes a solid choice for a deer/antelope gun. In comparison to the other .25s, it sits in a comfortable position. It’s slower than the .257 Weatherby—though that cartridge is most certainly overbore—and a bit faster than the .250-3000, .257 Roberts and .25 WSSM.

Charles Newton and A.O. Neider had a great idea when they mated the .25 caliber bullets with an ’06 case. I wonder if they had any idea that a century later, hunters would still be taking the design afield to fill their freezers and feed their families. I bet they’d be smiling if they could’ve known.

I’ve always loved the 25-06 & it’s abilities! I’ve got a couple in Remington 700 BDL’s, 1 fitted with a Douglas Supreme barrel & the other with a E.R. Shaw Hellical fluted barrel. Both 26" length & matching Jewell triggers. Encore Rifle with a 26" Stainless barrel from Match Grade Machine in Utah, & a Winchester Coyote Lite with a factory 24"fluted barrel. I shoot mostly only my reloads. 85 grain Nosler Ballistic Tip heads with 57gr RL19, approximately 3400fps. They kill!!! Anything from groundhogs to deer, from 50 yards to 600 yds, this cartridge has never disappointed me

It’s a tried and proven round for sure. I don’t remember ever having gun in that caliber though.

Bought one at 14, hell of a coyote killer. The first cartridge I reloaded for and lucky to still have my eyes and fingers. I noticed the max load in the book I used nearly filled the case, no pressure signs so I figured I would save time and just top off the case instead of weighing charges, nice crunch when I seated the bullet. Dad would have whipped my ass if he caught me, but he didn’t. Accuracy went to hell well before a thousand rounds but they shot nice and flat

Been thee done that. Ill stick with the 30-06.
You dont know the power of the dark side!
I shoot Barns varmint grenades at 3400fps and can take a head off a yote at half a mile. What else do you need.
I have a couple 1000 25-06 cases Ive picked up over the years(stuck in 06 bags of brass)
I have no problem reverting them back to 30 cal, they just dont last as long.