The M1 Carbine in Vietnam

Several high-profile U.S. weapons from World War II were in front-line service with the South Vietnamese Army (ARVN) throughout much of the Vietnam War. One of the most common of these was the M1 Carbine. This unique little American rifle captured the attention of U.S. troops deployed to Southeast Asia during the 1960s, much the same way it had caught the eye of the GIs and Marines in WWII.

The M1 Carbine was introduced into Vietnam by French troops during the late 1940s in their war with the communist Viet Minh forces. A large number of M1 carbines were captured and used by Viet Minh troops. After the First Indochina War ended in July 1954, M1 carbines filtered from the North into the hands of the developing Viet Cong guerrilla forces.

The M1 Carbine was a good fit for average-sized ARVN soldiers.

Beginning in 1956, U.S. military advisors brought M1 carbines to South Vietnam, and soon they were being issued to ARVN Marines and Rangers. Later, the carbines were also issued to the South Vietnamese National Police, as well as their Regional and Popular Forces and the Kit Carson Scouts. The compact size and light weight made for easier handling by the smaller stature Vietnamese troops. As U.S. troops began to arrive in country in larger numbers, more young Americans became interested in the endearing little rifle. Deals were made, bargains struck, and the M1 carbine began to appear in the hands of American troops—sometimes as a souvenir or curiosity, and on some occasions it was used as a back-up weapon.

Illustration depicting the most common styles of modified M1 Carbines as used by the Viet Cong. Illustration provided courtesy of Larry Ruth.

The M1 carbine was also popular on the communist side of the lines. The Viet Cong acquired and used many: Some were captured on the battlefield while others were stolen from ARVN stocks. Still more carbines were purchased by Viet Cong agents in Vietnam’s active black market. Many of the Viet Cong carbines were modified, featuring shortened barrels, or stocks cut down to the pistol grip, or a combination of modified features. VC jungle workshops created some M1 carbine imitations, usually crude bolt-action models that were chambered for the readily available .30 Carbine round.

U.S. adviser instructing ARVN troops in the art of bayonet fighting with the M1 Carbine.

The war dragged on and the M1 carbine remained in service in many ARVN units. Carbine expert Larry Ruth estimates that there were approximately 1.5 million of them left behind in Vietnam at the war’s end in 1975.

ARVN soldier learning the finer points of his M1/M2 Carbine from a U.S. advisor. Note his carbine is equipped with the M3 flash hider.

I asked a couple of Vietnam veterans what they thought about the M1 carbines they encountered while in Southeast Asia. Gordon Rottman, a veteran of the U.S. Army’s 5th Special Forces Group in Vietnam, had this to say:

“The M1 and M2 carbines are fine for a personal-defense weapon, better than a pistol. But as a combat rifle, it was extremely ineffective. Its range was too short, and the round delivered poor knockdown power and very poor penetration through typical cover materials (like bricks, sandbags, small timbers, foxhole parapets, plank fences, building walls, dense brush, and even bamboo). I found that some of the small parts broke regularly, and in very poor weather it could jam easily.

The M2 Carbine was a capable submachine gun (cyclic rate of about 900 rounds per minute). This example is seen in the hands of an ARVN soldier aboard a USN riverine patrol craft.

I asked Gordon if he had seen any of the modified M1 Carbines in U.S. service or with Viet Cong or NVA.

“A parachute rigger detailed to us had a cut-down M2. I fired it a couple of times on our range. It was a close-range bullet sprayer, inaccurate, and it overheated quickly,” he said. “I’m not an M16fan, but I preferred it over the carbine. My Cambodian CIDG company had M2s when I arrived, but we soon got M16A1s. The M2s had performed poorly in the couple of firefights we were in before we got M16s. We also had M2s when I went through the SF Combat Orientation Course upon arrival in VN.”

Captain Dale Dye, USMC, was wounded during the Tet Offensive in 1968. He had this to say about the M1 Carbine: “I certainly saw a bunch of carbines in Vietnam. I carried one for a while after trading an ARVN soldier two cartons of PX cigarettes for his brand new M2 and a couple of magazines. It was light and handy, but I quickly discovered what I’d heard from WWII and Korean War vets was true. The carbine round just didn’t have enough stopping power compared to other weapons that were available, so I stashed it away and found myself an M16. There were some early frustrations with that weapon as well, but when it worked as advertised, the ammo knocked down what I hit.”

Montagnard (Degar) troops training with M1 Carbines at a Special Forces camp during 1963. Note also the M3 “Grease Gun” SMGs on the sandbags in the background.

“The U.S. Army advisors carried carbines for quite a while and when we’d see them with ARVN outfits, they usually had an M2 slung over their shoulders. Vietnamese RF/PF outfits usually had early M1 carbines and used them to good advantage when they got into fights. Some advisors told me the Vietnamese militia troops liked the carbine since it was more suited to small men in jungle conditions and relatively easy to use and maintain.”

Lost childhood: the M1 Carbine served armed forces throughout southeast Asia. This child soldier was photographed in Laos during 1962.

“The Main Force NVA units that I encountered, especially leading up to, during and after Tet in 1968, were generally armed with Chinese copies of standard ComBloc weaponry (AK-47s, RPD MGs, RPK squad automatics, and the like) but the VC units always seemed to have a bunch of carbines in their inventory. I saw both issue models likely obtained from captured stocks and homemade versions manufactured in jungle workshops. And among those VC versions of the carbine, I saw every modification imaginable from cut-down, pistol-grip stocks to shortened barrels to woven slings made from jungle vines. I even saw one that had some sort of jury-rigged, spring-driven drum magazine that surprisingly seemed to work. The ordnance guys had a field day with that one!”

Many American units continued to use the M1/M2 Carbine. This example is seen with the 168thEngineering Battalion during Operation Atlanta during 1968. Note the Viet Cong bunker awaiting demolition in the background.

The M1 Carbine served U.S. forces from World War II, to Korea, to Vietnam. Each “generation” of American combat troops had their own experience, and opinions of the unique little rifle. With so many military and commercial manufacturers of the carbine, it’s no wonder it is America’s most collectible military longarm.

A smiling young Navy man ashore with his M1 Carbine in early 1968.

As for me, I cannot tell you what it is like to use one in combat. I thank God for that. Every time I take my trusty quality hardware-manufactured M1 carbine to the range, I also thank the good Lord, in this case, for my Second Amendment right to own it.

the 30 carbine is a fun gun to shoot, especially the m2. It was a short range cartridge. Gun was light and you could carry plenty of ammo.

But it sounds like the .30 carbine left only pea sized holes in Nazi heads while the 30-06 made part of their head into hamburger pie.

Oh it definitely wasn’t on par with the 06. not even close.

A relevant video from one of my favorite content creators.

The Carbine was originally designed to replace the 1911 as a personal sidearm but much more was expected of it so in came the Mods. It was fun to shoot turtles for stew, but my experience with an M2 was as backup for a twin ma-deuce in .50.

Shooting that thing had to be quite the experience. I take it you wernt shooting that as a civilian so it might not have been as glamorous as I picture it lol.

Shooting that thing had to be quite the experience. I take it you wernt shooting that as a civilian so it might not have been as glamorous as I picture it lol.

Shooting it is easy, they are on tripods and you are behind it, just don’t be standing beside one when it’s shot.

I’ve had a couple over the years. this is the only one I have now. 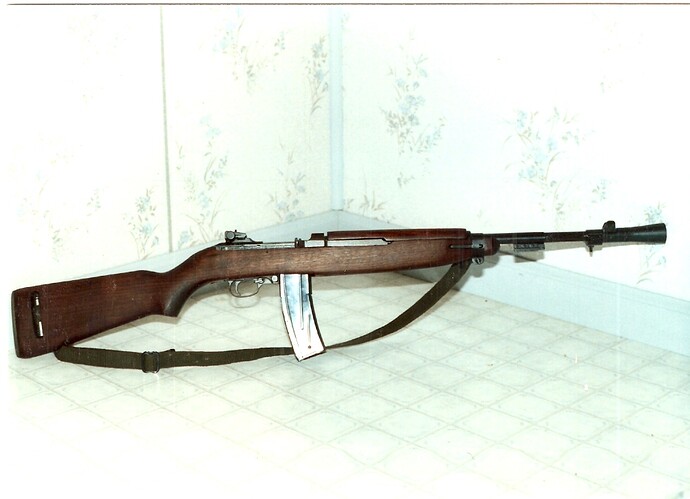 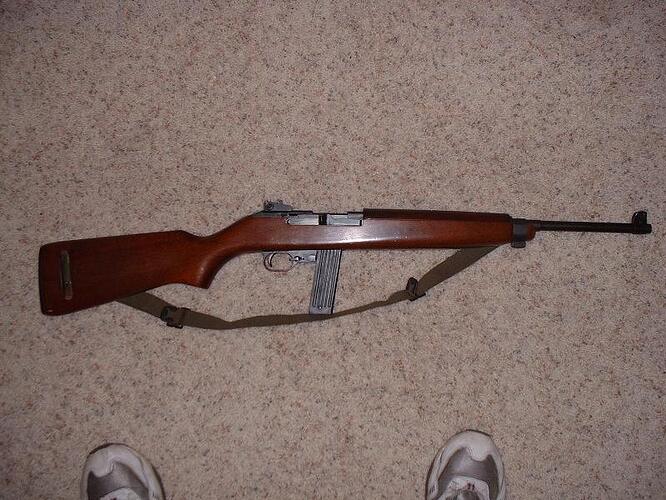 might not have been as glamorous as I picture it lol.

it not the shooting but cleaning

2 minutes of fun, noise, chug chug, dust and than it’s ah fukk I have to clean it.

We’ll have to meet up sometime…go to the range!!

Handy little original PCC’s with a paratrooper stock.
I must be lucky - all my 30 mags run fine.

I have an M1 Garand and would love to get the M1 Carbine. But man, they’re pricey.

Visited this at the nc state museum (that doesn’t allow weapons BTW) but I was kinda surprised to see them pro weapon history, interesting read and even more so bc I have a couple people I know at Caledonia prison where some of his work was done. Williams ran a still or 2 and got imprisoned for that and there was a movie with Jimmy Stewart made somewhat based on his story also I believe

Cool lookin old room, makin me want to get mine out and shoot it. probably don’t have much ammo for it though.