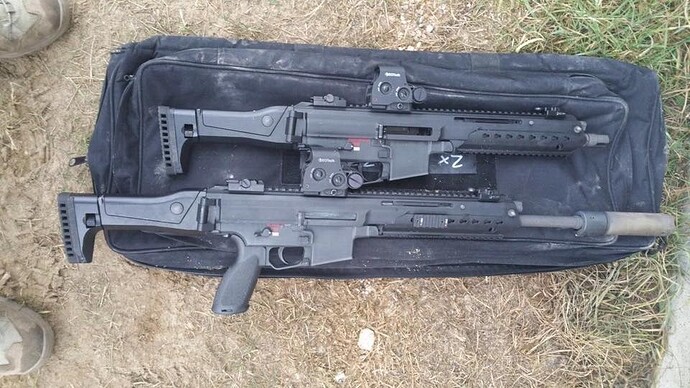 It looks like a SCAR / ACR hybrid. It’s kind of funny how someone finds a look that is popular and for years afterwards everyone tries to build something that looks just like it.

With it being HK made though, I’m sure it’s the cats meow. I can’t live without it. But, unless they make it here in the US I doubt we’ll ever see it for sale in the States. That, or they’ll import some God awful neutered version like the SL8.

My first impression of a weapon is the way it looks. If it doesn’t do it for me, I care not how well it functions. These, I really like.

We suck, and they hate us. Did the mags have the rounds in the right way?

We suck, and they hate us. Did the mags have the rounds in the right way?

I can’t see any rounds, but I do see an EOTech which tells me they didn’t get the memo about those being problematic.

I can’t see any rounds, but I do see an EOTech which tells me they didn’t get the memo about those being problematic.

At least they mounted it correctly… this time 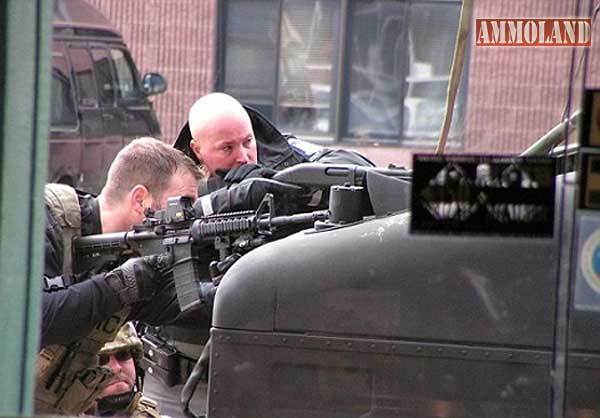 H&K: Here is our new rifle, it is better than all others and more expensive!
US consumer: When can I buy one?
H&K: They are not for you! Our laws say no sales to US civilians because it promotes murder but we can sell to every 3rd world crap hole.
US consumer: but I want one!
H&K: NEIN! but we will sell you grey colored neutered turd for twice as much and you WILL LIKE IT!

It looks very interesting, but i’m quite sure due to the long testing and evaluation procedures of the german military i’ll have left the service by the time it’s issued…

I’m not aware of any detailed info on it’s operation. I’ve read a lot of speculation. However, I would assume HK would copy the ACR in having the charging handle 1) be reversible and 2) not reciprocate.

H&K: Here is our new rifle, it is better than all others and more expensive!
US consumer: When can I buy one?
H&K: They are not for you! Our laws say no sales to US civilians because it promotes murder but we can sell to every 3rd world crap hole.
US consumer: but I want one!
H&K: NEIN! but we will sell you grey colored neutered turd for twice as much and you WILL LIKE IT!

This would be funny if it were not true.

German mmilitary serching new AR, looks as hot candidate or not? Steyr makes one too, RS556

What I don’t understand is why they want to keep re-inventing the wheel instead of simply buying the HK416A5 16.5" off the shelf as a 1 stop replacement for all current SMGs, carbines and general service rifles. KSK already uses it, the rest should just follow suit. HK is kinda synonymous for horrible triggers though so they might want to place an order with Geissele. And while they’re at it let BCM supply the stocks and grips because HKs furniture is horrible. That way our industry benefits from the transition as well.

Because (probably just like in the U.S) although obtaining a new service rifle requires public competition, it’s always
influenced by economic policies. The same applied to our new transport helicopter. Instead of buying Blackhawks which are already field tested and proven, economic policies demanded that european companies developed it from scratch.
With the result that the NH-90 helicopter is still not operational (with “90” being the year of comission, haha…).
In short: No fancy stocks or triggers from foreign companies. And even though i was able to get an internal paper from the “Arbeitsgruppe Infantrie” i.e. research group infantry, which stated that the H&K 416 would be the most likely successor to the G36, it’s considered to pricy for a general service rifle.
Besides, in my humble opinion, an upgraded version of the G36 like the G36 A4 would have sufficed.

As with everything HK, the G38 aka HK416A5 is overpriced but you sure get what you pay for. I agree with you on the G36. There’s nothing inherently wrong with it. It’s not as good and ergonomic as the AR platform though, but what it does, it does well. I don’t like its angled grip and AK inspired magazine release lever thoug, but overall, the G36 is a solid rifle. I’m sceptical about the whole overheating thing. HK knows what they’re doing and would never release a rifle with such a major design flaw. You guys might want to take a look at LWRC instead. They are large enough to handle large govt contracts and the Swedes bought their product as well. But I guess German national pride comes in to play when replacement of the general service rifle is concerned. You can bet your life savings that HK will be awarded that contract.

H&K has let loose some stinkers in the past, one is the VP70. I also consider the UMP subguns to be a real loser compared to the MP5. Also remember that the MP5-10 destroyed itself so like any gun company, H&K is not infallible.

The ergonimics of the AR platform seem quite superior, although i believe the gas-piston design is better than the one of the AR. I’d really like to visit the U.S. in the not-so-distant future (If they’ll let me in at this point in time , sorry couldn’t resist

) to try out some AR platforms. Is that even possible without U.S. citizenship?

Like I said, there is nothing inherently wrong with the G36.
Don’t forget, AR-15’s come in lots of different flavors. As for piston designs I think the best 16" .223/5.56 designs available on the market today are the PWS MK116 Mod 2. LWRC IC Enhanced and HK G38/416A5. With PWS having the edge as it is forged and a further development of the AK BCG and piston. The system operates like a smooth push rather than a violent punch, which significantly benefits stability and accuracy. The rifle overall is also perfectly balanced as opposed to the front-heavy-ish LWRC and HK offerings. I wouldn’t mind owning an IC Enhanced and/or a G38/416A5 at all. They are solid rifles.
You can come to America as a tourist and visit ranges. I recommend you just book a vacation and go to Machine Guns Vegas in Las Vegas for a really good and fun experience. Just bring a current photo ID and you’re good to go. Your German passport will suffice.

There arent ranges in germany where you can try them (especially if you are in service)? German made AR15 always seemed decent…