The Purist vs. The Adequate

The Colt Single Action Army, as it’s generally referred to, is considered the gold standard by purists, as the iconic lockwork for the Sixgun.
It’s primary features include an easily bypassed safety stop, half clock hammer position for the opening of the loading gate, and a cylinder timed correctly to line up each cylinder with the ejector rod via a satisfying audible click.
This system has been copied by most import and domestic sixgun manufacturers, however two primary factors have rendered this system almost extinct, the anti gun lobby, which dovetails with general insanity, and the industry seeking to protect itself against lawsuits.
In 1972, which surely seems to be ancient history today, Bill Ruger debuted his transfer bar system, thus changing the Blackhawk forever from a three screw frame, to a two pin. Purists still love the three screw frame, because it is that iconic Colt action.
It would be an understatement to say that the transfer bar system was influential, as today transfer bar systems are found throughout the gun industry, from Henry to the aforementioned Ruger.
However, the biggest complaint, and a very valid one, is that the Ruger system did away with the audible click indexing with the loading gate / ejector rod.
Why is this such a big deal?
Old timers had their familiarity with the Colt system deeply ingrained. It became second nature to load, and unload via the sound and feel. This enabled one to keep their head up and eyes open while changing over, and it made it much harder to be taken by surprise with gun compromised.
Maybe by 1972, most sixguns were purchased by those with different sensibilities, or maybe they were deemed adequate enough, but whatever the case, it was Ruger that introduced the adequate transfer bar action, and ever since divided Sixgunners into purists, and their counterpart.

When Ruger first went to the 2 pin, there was an audible click when rotating the cylinder while unloading/ loading, bad thing was when you heard the click it meant you went to far and the rim would not clear the frame, and it wouldn’t turn back. Had to go all the way around again to access that bore. Until you got the hang of it you would likely go around 2 or 3 laps to completely unload and reload. Unbelievable but true. How they let tens of thousands of revolvers out of the factory timed like that is one of the mysteries of modern firearms. You would think someone might have tested a few but apparently the only guy left at Ruger that knew anything about loading single action revolvers was on vacation. Spawned an entire industry around reverse spin pawls. I have 3 new style Rugers that load fine, but 2 of them came from Bowen’s shop and the other one from Mag-na-Port so I don’t know if it is still a thing on the factory jobs.

Al, the last Ruger, that was actually a new Ruger that I managed to go over was now from a couple years back, a Super Blackhawk 44 Magnum. It had the same mis-timed cylinder of my old and battered two pin .45 Colt.
It’s pretty hard to find much out here these days. Our guvner is a Bloomberg gopher, and she drove most of the independent stores out of buisness. This leaves the cop shops and the big chains. All of my old haunts are permanently shuttered, and I haven’t laid hands on any of the new Bisley variants, not once, so it might be that Ruger has addressed the issue, at least on some models, but I wouldn’t know.
Before the fire I knew a few SASS guys who stated that the updated and smaller frame Vaquero line included a ball detente that functioned to index the cylinder properly with the loading gate and ejector rod, but I never managed to find one of those, either, to test if it actually worked for eyes off loading/unloading.
I’m pretty sure that those reverse pawl parts are still available, but at this point, I’d just assume fit a new pawl and hand, if I had the place to work.
It’s just a durn shame that Ruger built so many sixguns with such a huge flaw, and it is the one area that severely limits their utility. I’ve been called a purist more’n once for belaboring this issue, but really, there is no excuse for crippling the sixgun in this fashion, unless you really want to render it useless for anything other than plinking.
I do admire the Ruger contribution to American arms, but here, they clearly fumbled the ball before the end zone.

Well, I guess I get to reply to my own post here, almost as bad as playing Chess against yourself, 'cept in the case of Chess, you never loose.
The free spin pawl is still being offered by Power Custom, which is also called the hand, and is probably the best way to get around the over traveling problem on the two pin models. It won’t help with eyes off loading and ejecting, though. It’s a help, but not a cure.
It seems the only Rugers to offer an improved indexing are the mid size frame Flattop, Vaquero, and Anniversary models. With these guns, it seems, from what I can tell, eyes off loading and reloading is possible.
So, based on what I can discover electronically, Ruger actually offers a few models with this necessary feature. I would imagine it likely that the newish 44 Special cal. Bisley is so equipped, but this is not certain.
Anyway, for anyone who might wish to become proficient with a Single Action in the way of those who lived and died with such historic steel, the opportunity is there from one of America’s most stalwart manufacturers.

I like Power Custom’s stuff. Have a couple of his Match 10-22LR Bolts and his Trigger et al in my 308 Win Vepr very Sweet!

Good people. Name been around for quite a while, think the boy involved now with the new company. That’s where the #5 grip frame came from on my latest Bowen Custom.

One thing I’ve always thought was nice about the Rugers, don’t have to be rich to collect a few. Not much use starting a collection of guns you can’t afford.

Yeah, I also noted that Bowen Classic Arms still offers pawl or hand installation on their services page. I don’t know for sure, but I think Power Custom is now just parts, not smithing, so maybe Hamilton Bowen is the go to guy.
I know for myself that if I could collect at least a few sixguns, Ruger would be top on my list for a couple models at least. It might seem kind of strange to be fixated on the flat top frame, but this configuration actually goes back to pre-war Colt, with their target model. I’m too old to ever imagine coming up with the coin to have the honour of ownership of one of those gems, but I harbor a not so secret hope to enjoy a Ruger version.
Good to have Mr Bowen and Mr Power still in the game.

Indeed. I want a pair of 44 matching mags someday. Have decided on ‘Ivory’ grips and cartridge. Ruger was in the running, have to see now now that I found Janz…

Lot to learn re wheel guns for me… 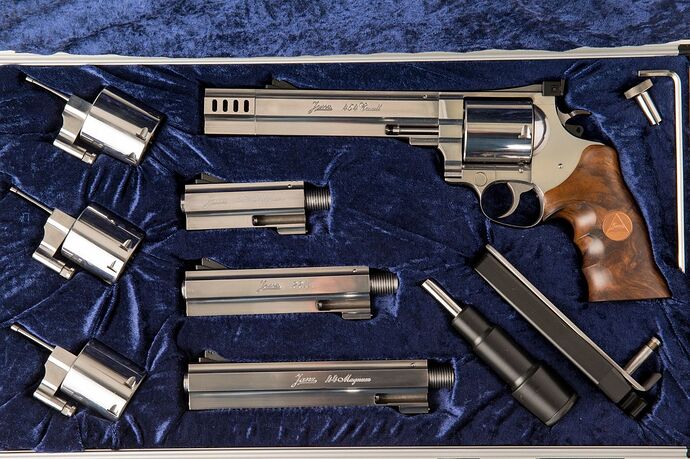 Janz = Yahnts (pronounced).
Multical and multibarrel reminiscent of Dan Wesson.
Funny, I was going to start a thread on double action revolvers, but this is one fine looking piece of machinery, doubtless in the stratosphere in price.
Nice.

Indeedy. I was looking for a Dan Wesson when I stumbled into this sexy thing.

I like Dan Wesson’s stuff. If I was going to buy a 1911 type it would be one of their humped Bobtails. 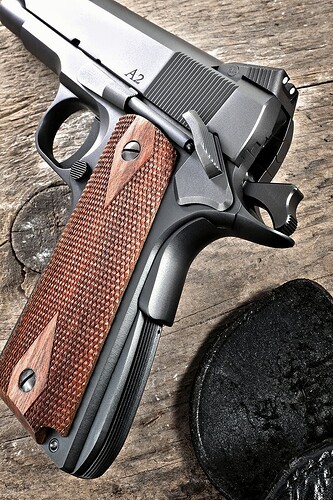 Yep, that photo shows what we in the vernacular used to call an arched mainspring housing. The 1911 started out with a flat mainspring housing, but some time after “The War to end all Wars” ended, and the next one began, the military decided it needed a new variant, which they called the 1911A1. Aside from an improvement with the sear, which was needed, the short trigger, and the arched housing that actually forced the muzzle up in most hands, which was considered the next best thing since sliced bread. I am of the opinion that the arched looks better than it feels.
I’m pretty sure the bobtail frame was first brought into production via Ed Brown, and while never widely available or affordable, it made its mark in the small world of quality 1911s.
Dan Wesson followed pretty quickly, offering a stainless bobtail only marginally less expensive than the Brown.
Since then, I think Kimber had a go at bobtail models, but the bread and butter 1911 offerings never followed up.
I will say, depending on the geometry of one’s hands, the bobtail can be a sweet shooting experience, and is generally better suited to a consistent hold than the arched housing.

I think your right it was Ed Brown that 1st did the bobtail. I haven’t shot the arched housing Dan Wesson, but I held one at the LGS and it felt good. Didn’t have time to try it that day on their range out back and when I went back it was gone. The CZ-75B is still the most comfortable handgun I have ever held or shot.

Didn’t the A1 also start relief cuts for the trigger finger?

bobtail can be a sweet shooting experience 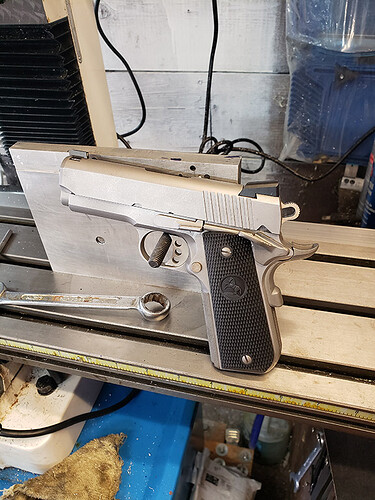 Always wondered how those 1911 kits worked out. Never tried one myself, especially since some of them cost more than complete guns.

First I heard of them