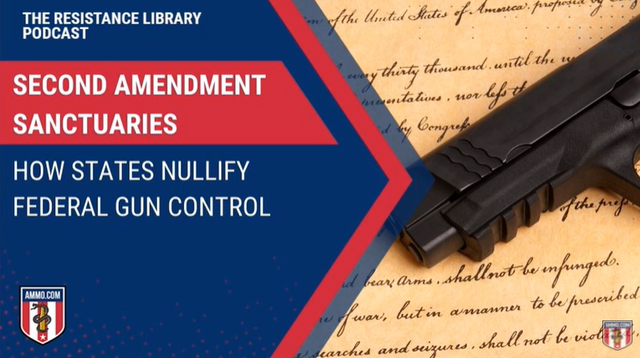 On this episode of The Resistance Library Podcast, Sam and Dave discuss Second Amendment Sanctuaries. Nullification is as American as apple pie. It dates back to 1798, when the legislatures of Kentucky and Virginia supported resolutions that asserted the states’ right to stand against federal infringements on their powers. During the 1850s, Northern states resisted the Fugitive Slave Act of 1850. For Second Amendment activists attempting to roll back federal overreach on the right to bear arms, this strategy is slowly becoming an attractive option.

During the Obama Administration (2008-2016), Republicans in various state legislatures put forward dozens of nullification bills. By the end of his eight-year term, 22 states had 50 bills pushing back against encroachments on the Second Amendment and governors signed five bills into law taking on federal gun control.