The Resistance Library Podcast: The Gun-Free School Zones Act of 1990 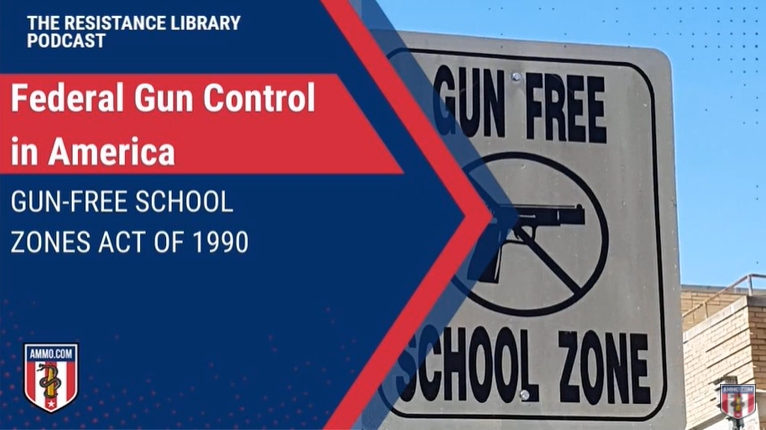 On this episode of the Resistance Library Podcast, Sam and Dave discuss federal gun control in America. Mass shootings at schools are among the most traumatic events in modern-day America. These tragic incidents receive wall-to-wall media coverage and spark heated political debate.

Many contend that these shootings are the consequence of the U.S. not having adequate gun control measures. Staunch gun rights advocates offer an alternative perspective to this issue. Indeed, these incidents should not be taken lightly. But there’s more to the story than just regulating guns.

In America, most schools are “gun-free” zones, where the possession or carry of firearms are generally prohibited. However, this is not a local policy coincidence, but rather the product of federal policy. This started in 1990, when Republican president George H.W. Bish signed the Gun-Free School Zones Act (GFSZA) into law. Originally sponsored by then Delaware Senator Joe Biden, the GFZA strictly prohibited people from carrying firearms within a one-thousand-foot radius of public, private, and parochial elementary and high schools.

The passage of this law was met with pushback. In 1995, the Supreme Court ruled in United States v. Lopez that the 1990 GFSZA was unconstitutional, due to the fact that the law’s handgun ban near schools did not have a substantial impact on interstate commerce. As a result, the 1990 GFSZA was re-written to only apply to guns that were moved through interstate commerce.

Pro-gun activists argue that the GFSZA has made schools vulnerable to deranged murderers, who recognized notable security flaws and tightly concentrated venues that allow for considerable casualities. Famous gun researcher John Lott found that 98 percent of mass shootings have taken place in gun-free zones since 1950.

There have been attempts to repeal the 1990 GFSZA in Congress, with Kentucky Congressman Thomas Massie leading the charge on multiple occasions. In 2019, Massie introduced the Safe Students Act, which would repeal the 1990 GFSZA. In Massie’s words, “Gun-free school zones are ineffective. They make people less safe by inviting criminals into target-rich, no-risk environments. Gun-free zones prevent law-abiding citizens from protecting themselves, and create vulnerable populations that are targeted by criminals.” Massie has introduced similar legislation in the past, but has not received much support on the issue.

Some states like Florida have recently responded by passing measures to allow for armed teachers in educational facilities. These efforts represent a more localized approach to solving this issue, especially when considering that the federal government has not really made a concerted effort to reform the 1990 GFSZA.