The Resistance Library Podcast: The History of Davy Crockett 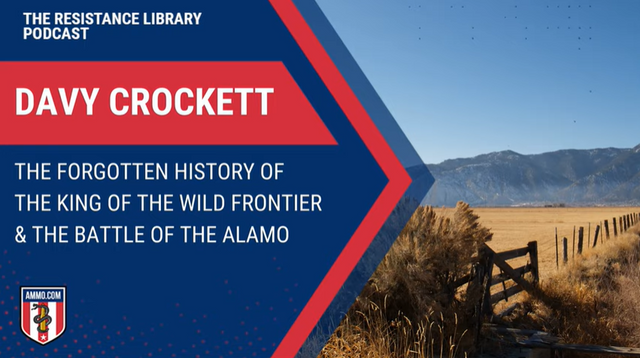 On this episode of The Resistance Library Podcast, Sam and Dave discuss Davy Crocket and the forgotten history of the King of the Wild Frontier and the Battle of Alamo. David Hawkins Stern Crockett, fondly remembered as Davy Crockett, was born in eastern Tennessee to pioneer parents on August 17, 1786. Like many settlers of the time, the Crockett family continually pushed West, blazing into new territory (a trend Davy would continue to do with his own family) and by the time Davy was 12, the family had moved three times and was living in western Tennessee.

Known as an honest and hardworking boy with a good sense of humor, Davy learned to shoot with his father around age eight and enjoyed joining his older brother on hunting trips.

The boy who would become known as “King of the Wild Frontier” ran away from home at the age of 13, after getting in a fight at school almost immediately after he was enrolled. Not wanting to face the wrath of his father, or retaliation from the class bully he fought, Davy went on his own, taking up odd jobs including working as a farmer, cattle-driver, and hatter.

At 15, Davy returned home and indentured himself, more than once, to pay off his father’s debts. Unbeknownst to the country boy, young Davy’s humble beginnings were leading him down roads that would twist through politics, battlefields, and America’s heart – turning him into a folk hero of mythical proportions.

You can read the full article Davy Crockett: The Forgotten History of the King of the Wild Frontier & the Battle of the Alamo at Ammo.com.

phew, I’m happy to hear bear pronounced right at least once, was getting worried

surprised he’s not been wiped from history yet, surely not a save the puppies kind of guy

I’m surprised he hasn’t been canceled yet.

His parting shot to the US Congress seems worth saving him from the dust bin of history.

‘Ya’ll can go to hell, I’m going to Texas’ is worthy of immortality in my book.

Fortunately his opinion on trans rights was never recorded or he might have been canceled already.

his opinion on trans rights was never recorded or he might have been canceled already.

Maybe ,Che Guevara campaigned to have gays put in prisons and he seems to be worshipped by the left

Yeah but he wasn’t a Caucasian man that loved Liberty and God.