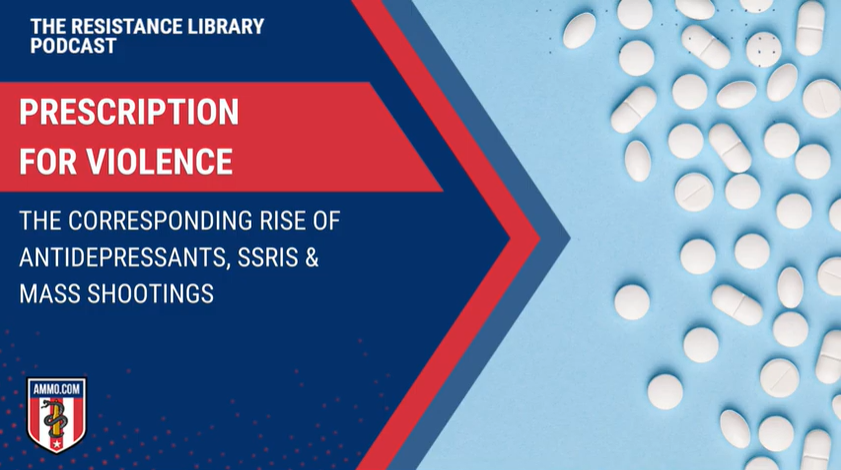 On this episode of the Resistance Library Podcast, Sam and David discuss the corresponding rise of antidepressants, SSRIs, and mass shootings. According to the Federal Bureau of Investigation (FBI), a mass murder occurs when at least four people are murdered, not including the shooter, over a relatively short period of time during a single incident. Over the last 30 years, the United States has seen a significant increase in mass shootings, which are becoming more frequent and more deadly.

Seemingly every time a mass shooting occurs, whether it’s at a synagogue in Pittsburgh or a nightclub in Orlando, the anti-gun media and politicians have a knee-jerk response – they blame the tragedy solely on the tool used, namely firearms, and focus all of their proposed “solutions” on more laws, ignoring that the murderer already broke numerous laws when they committed their atrocity.

Facts matter when addressing such an emotionally charged topic, and more gun control legislation has shown that law-abiding Americans who own guns are not the problem. Consider the following: The more gun control laws that are passed, the more mass murders have occurred.

Whether or not this is correlation or causation is debatable. What is not debatable is that this sick phenomenon of mass murderers targeting “gun-free zones,” where they know civilian carry isn’t available to law-abiding Americans, is happening. According to the Crime Prevention Research Center, 97.8 percent of public shootings occur in “gun-free zones” – and “gun-free zones” are the epitome of the core philosophical tenant of gun control, that laws are all the defense one needs against violence.

Therefore, when the media and politicians focus their ire on guns, specifically what types of guns are used, such as AR-styles, carbines, semi-automatics, and “high capacity” handguns, in the wake of such tragedies the American public are being intentionally drawn into an emotionally charged debate about legal gun ownership (irrespective of whether the murderer’s gun was legally or illegally obtained). This debate leads them away from the elephant in the room and one of the real issues behind mass shootings – mental health and prescription drugs.

You can read the full article Prescription For Violence: The Corresponding Rise of Antidepressants, SSRIs & Mass Shootings at Ammo.com

AKA, a chemical lobotomy, this report is way to abbreviated for the subject matter

This right here needs to be rolled right into todays issues with science and censorship. I Believe Mr. Noveske was hot on this issue, @98Z knows this topic well.

A casual friend and his family moved up to Montana for work. We were becoming better friends and I tried talking him out of making the move and commuting. He was adamant and pretty happy he had done it.

His wife was back in town visiting her parents with their daughter. When he couldn’t get ahold of anybody he drove down. He found all four shot to death in a murder suicide. His father in law was on Paxil and flipped. It devasted him.

A few years later I heard he sued the manufacturer. Don’t know whatever happened with the case.

I would never have firearms unlocked around anybody on any of the SSRIs. I would be locking the bedroom door too.

on Paxil and flipped

Very sorry to hear this

, but this is not isolated or even being considered for restraint, I’d actually say your posted article on cybernetic organisms is an extension of it

Noveske was hot on this issue

Truly horrifying. Big pharma deserves to be hung by their toes for a million reasons, but I have no hope they will ever be held accountable for this in court.