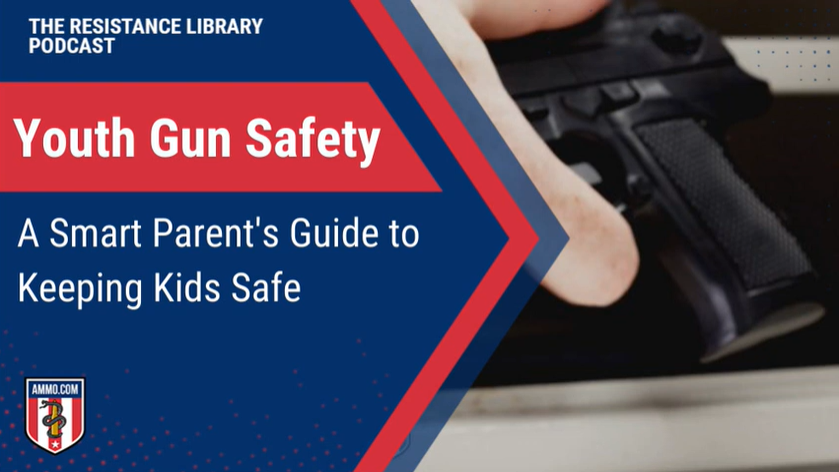 On this episode of The Resistance Library, Sam and David discuss a very important topic: youth gun safety.

With a firearm in one-third of American homes with children, it’s very likely that, as a parent, you’ve thought about gun safety for your child. This statistic comes from Asking Saves Kids (ASK), a national campaign that encourages gun safety – something that may seem intense for a child, but is absolutely necessary.

Children are naturally curious. To learn about the world, they gravitate toward the new and interesting, especially things that often get portrayed as “taboo” like drugs, alcohol – and guns. Though it can be a nerve-racking discussion, an important part of preparing your child to be an adult is teaching them how to think about guns when they do encounter one, whether it’s in your home or someone else’s. The ASK campaign promotes one simple idea to help with this conversation, which is to ask one very critical question: “Is there an unlocked gun in your house?”

You can read the full article Youth Gun Safety: A Smart Parent’s Guide to Keeping Kids Safe at Ammo.com

“Is there an unlocked gun in your house?”

Several… but no chitlins…

I have fond memories of my youth firearms training, at five. “Never shoot towards the house, now go in the timber and get the dog something to eat”

Honestly though, formal firearms training was not needed, it was a tool like any other on the farm, guns just always were what they are. Every day was a lesson on something, if I gauged adults concern for me at that time the corn sheller that came to the farm once a year was magnitudes more dangerous than dispatching dog food.

My ole man used to leave his 45 around the house just to see if any of us were dumb enough to play with it.
One of us three would see it and tell he or mom that there is a firearm out of place.
When my daughter was 11 her baby sitter was dating a cop. One day she when to the sitter’s house and there was a revolver on the coffee table.
My Daughter yelled " There is a kid in this room with a leaded gun, this is not a good situation"
She did not know if it was loaded, but was taught that all guns are loaded until proven other wise.
I took her to Chucky Cheese that weekend.
She is now in her 40s and bought her first hand gun.

formal firearms training was not needed

the biggest problem today is that children all learn their firearms safety from the like of Alex Baldwin or worse You Tube. There was a time when firearm safety was taught in school, but now TikTok or video games rule that venue.

Used to have to take it in HS. They were trying to bring it back in Wyoming as an elective. We after we passed Hunter Safety we could take Archery and Riflery instead of PE too.

Surprised the constant brainwash has taken millions?
Not I.
Cancer spreads untreated

I never received such formal firearm training myself. I just fired alongside my dad, who tacitly passed on the basic rules of firearm safety and the common sense needed to follow them. He learned from his dad, who got a lot of target practice during his tour of France and who subsequently terrorized woodchucks at every farm in Upstate New York.

But a lot of folks weren’t raised by shooters, and what we assume to be common sense unfortunately seems fairly alien to a lot of new shooters. I shrivel whenever I see someone’s finger reflexively creep toward the trigger of any firearm they handle. But I want every law abiding citizen of this country to own a firearm (except for communists), which means all the common sense stuff has to be constantly hollered from the rooftops!

Yep, we have to put a gun in their hands at every opportunity, no substitute for that, the right is irrelevant if we lose the culture.

Who glorified gangsterism in their culture?

Yep. Didn’t see to many in our American culture decrying it. Some to be sure, but not enough.

GREED + stupidity.
So what if a gangster lifestyle gets so many negros killed selling burn loot murder BS in clothes music TV etc…
Amazing a group of people [?] buys into this BS to make big bucks for WHITE corporate bigs.
Can’t cure stupid.
I can watch and LOL though.