..they would no longer demand to see our papers.

As many of you know I’m a consultant to this group.

I produced this news release for them, out today – 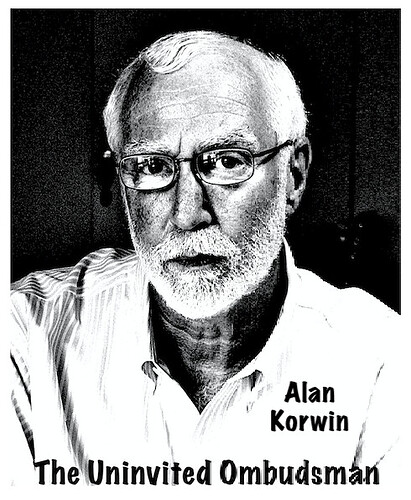 The only thing illegal is the government’s plan

The Biden administration, frustrated with widespread failure of Democrats’ plan to Defund the Police and its predictable skyrocketing crime rates, is now seeking to repeal the federal “Protection of Lawful Commerce in Arms Act.” This landmark 2005 law was designed to protect exactly what Biden and his team now seek to outlaw—legal activity.

“They avoid the tough, politically challenging task of going after the perpetrators of brazen outdoor daylight murders, who are often non-inclusive people of color in disadvantaged neighborhoods. It’s true but not politically correct to acknowledge, which is why CNN and mass media in lockstep do not,” said Alan Korwin, an award-winning author and consultant to JPFO.

Biden’s team has instead chosen to scapegoat fine, historic, capital-intensive employers and manufacturers of the firearms America depends upon to preserve peace and freedom. Mass media is playing along with this abhorrent scheme, by failing to point out the obvious:

1–The murderers are already heavily armed;

3–The “superb” existing background checks have had no effect;

4–Critics say the checks are largely a failed distraction (ask JPFO about that);

5–Most of all, ethnically non-diverse actors, operating in discreet, easily identified areas, not cities, are frequently known to law enforcement who provide little enforcement, to prosecutors who do little serious prosecution.

Long rap sheets are a hallmark of the few perps caught, and the problem.

Rather than face these known gross failures, which perpetuate the problems and obscene rates of assaults on innocent children, inner-city women and men, and partisan gang members, the power elite has assembled its leadership from the most anti-gun-rights states—all seven of them. They’re attacking a primary law protecting the Constitution and fundamental rights of the American public, in place for nearly 2-1/2 centuries.

If this wasn’t so unfathomably bizarre it would be fiction, but it is not. The so-called “news” media has once again failed its ethical obligations and taken up a role as a mouthpiece for an openly corrupt central government and its unconstitutional proposals. Attached, the White House plan, verbatim, lacking a single mention of criminals responsible.

FOR IMMEDIATE RELEASE — FROM THE WHITE HOUSE [verbatim]

Today, Domestic Policy Advisor Susan Rice, White House Counsel Dana Remus, and Director of the Office of Intergovernmental Affairs Julie Rodriguez hosted a virtual convening with attorneys general from seven states and the District of Columbia to discuss policies and strategies for holding gun manufacturers and dealers accountable for wrongful conduct that contributes to the supply of firearms used to commit gun crimes. This convening is the first of two meetings with state and local officials that were announced in President Biden’s comprehensive plan to reduce gun crimes, including by supporting local law enforcement, investing in proven community violence interruption efforts, and stemming the flow of guns used to commit crimes.

President Biden has repeatedly and forcefully called for Congress to repeal the Protection of Lawful Commerce in Arms Act (PLCAA). This law gives gun dealers and manufacturers special immunity from certain liability for their products, hindering the public’s ability to address the epidemic of gun violence through the use of civil litigation in the same way they have been able to with the tobacco and opioid industries. As the President said in the Rose Garden this past April, “Imagine how different it would be had the same exemption been available to tobacco companies who knew and lied about the danger they were causing.” During today’s discussion, attorneys general shared how PLCAA has served as a significant barrier to holding gun manufacturers and dealers accountable for unlawful conduct that led to shootings, homicides, and other gun crimes, and how repeal of PLCAA would enhance their ability to advance the public safety of Americans.

As directed in the President’s gun crime reduction strategy, participants in the convening also discussed how we can hold gun manufacturers and dealers accountable for unlawful conduct while PLCAA is still the law of the land. Attorneys general discussed the opportunity and barriers to using generally applicable state consumer protection and nuisance laws to take action against gun manufacturers and gun dealers under PLCAA’s predicate exception. They also discussed how state legislators could enact firearm-specific liability laws, like New York State’s new law, to potentially create new predicates allowing litigation to proceed under PLCAA.

Do you know a really aggressive trial attorney? My daughter may be forced to get vaccinated by her employer, and she refuses to do so at age 34…we are looking to pursue something along these lines: 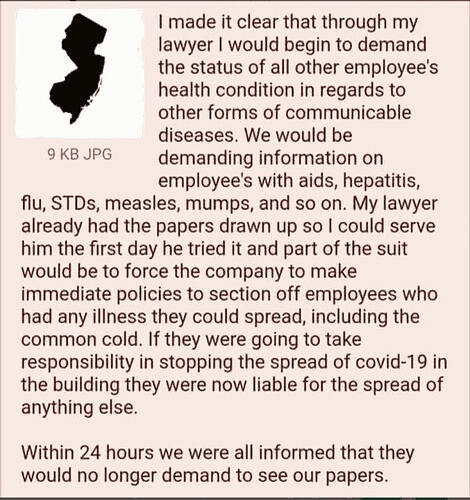 Sounds like a wonderful approach! Yes, I know one who might eat that up, I’ll ask him, we’re very close friends. You also know (name withheld) from the JPFO Political Salon meetings, very libertarian, and good. More aggressive still, Marc Victor, widely known, loves a challenge like this. OK for a start? You could also inquire at the Goldwater Institute here in town, see what they have to say. Timothy and Christina Sandefur are their lead attorneys, they both know me, I consider them friends.

Tim is top guy, Christina and their team represented me v. City of Phoenix in our free speech case when the city tore down our bought-and-paid-for “Guns Save Lives” billboards and bus stops, with Clint Bolick, now on the Arizona State Supreme Court. Goldwater introduced and championed The Right to Try Law, so people in desperate life-or-death situations could get experimental medicines, to save themselves, rather than wait years (or decades) for the FDA and bureaucrats to act. It was enacted – this might be just right for them. Say hi for me, and let me know how it goes.

I got a brochure from the Doctors for Disaster Preparedness Conference two weeks ago that illuminates the problems with the Emergency Authorization for mRNA approach, I’ll scan it and send it over. There’s good reason why it’s only approved for emergency use, even if 100 million + people have it in their systems. Tell your daughter, “Choose wisely.”

I’d like to add this to my comments about the safe house the federal government under Mr. Biden is running in downtown Scottsdale for illegal immigrants, with open cooperation of ALL authorities, Republican and Democrat. It occurred to me after I posted Page Nine #200, while trying to reach the people who did not get the original memo due to a technical glitch:

Clearly the Democrat’s cabal is using immigration to tip the scales.

All the talk about suffering masses is subterfuge and nonsense.

The border is not closed, it is wide open and invaders are invited to arrive.

They are being shipped nationwide, everyone is a part of this.

We should play no part in pretending it’s illegal unwanted or unfathomable.

It’s desirable, planned, managed, purposeful. Illegal is not part of the formula.

The cost is astronomical, food service trucks have been hired, deliveries are regularly scheduled.

I asked my congressman, David Schweikert about it, he said many have asked about that exact thing. They’re “looking into it,” need time while people have their request for asylum handled… it was bureaucratic bafflegab and basically BS. It’s just going on, he knows it, he’s part of the operation near as I can tell, doing nothing, letting it ride. If he wanted to act on an openly illegal operation this blatant, he could demand local police and sheriffs and state get down there, face off with feds acting illegally, and make a stand. Criminally present disease carrying paperless individuals being fed and privately guarded before being shipped away. “But that would be illegal!” Right.

Perhaps the most amazing part – someone should ask Dr. Faust-i – why such concern over the Chinese plague among students, citizens, the vaccine hesitant… when we’re shipping in the infected people from worldwide – worldwide – by the thousands! without any care, measurement, tracking, nothing. Doesn’t that matter to this master scientist? Slyentist? Sigh-entist? It’s beyond fraud. He cannot claim any credibility while this goes unaddressed. CNN and the rest lost all credibility ages ago.

All the news stories use inflection and ire to couch the reports, but the words themselves are neurolinguistically programmed. Stripped of the camouflage of sound, they read accurately. “OMG, We have 6,000 immigrants a day coming in!” The only thing they don’t actually say is “Get yours!”

And concerning the Arizona Ballot recount:

I volunteered for the audit three times on separate days, sat at the forensic tables twice, the rotating-easel counting tables once. It all looked squeaky clean and amazingly well organized to me, mess media got that totally wrong. Plus, it is all recorded multiple times, closeup and from overhead, I was amazed at the storage capacity that must have required, no wonder it was expensive (equipment for it was all in the middle of the counting room floor). The forensics used four digital microscopes and a large format digital camera on every ballot, no room for funny business, all recorded. We were required to leave phones, pens, pencils, even blank paper in lockers before entering the floor, where multiple observers prowled full time. The 2.1 million ballots were in boxes behind a chain link fence and under armed guard the entire time, with a chain of custody recorded as they came out for counting and went back afterwards.

Quite impressive for something that’s never been done before, no wonder other states came to watch and learn, so they could do what Arizona figured out how to do.

So much more to cover,

but I don’t want to delay the first item. 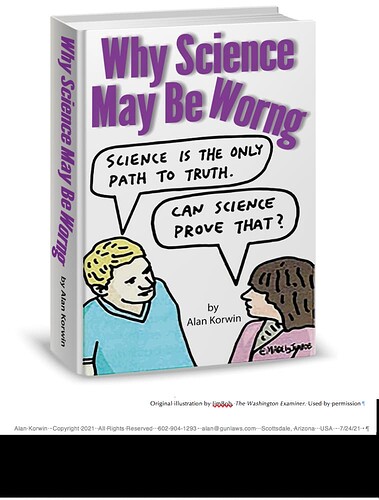 If you can read this, thank a teacher.
If you’re reading this in English, thank a veteran.

“No one could make a greater mistake than he who did nothing because he could do only a little.” --Edmund Burke

He’s one of a very few email subscriptions I carry