They're banning the AR-15 in Deerfield Illinois!

June 8th is the dead line, anyone caught with an AR-15 or for that matter anything on the banned list of weapons, are you ready for this the fine starts at $1,000 a day!!!

I’d be finned about $15k a day. They managed to ban nearly everything in my vault.

I go to Schaumburg IL from time to time for business, and I know people in the area. If I had to guess. No normal police enforcement will be done with this, and no civilian with intelligence will get rid of them. All this is in my opinion is a “ show of support” for the anti gunners. This will however hurt the local gun shops.

Sad but you get the government you vote for. It wont be much longer before the illegals turn Texas blue. I ain’t turning in shit! Eventually it will all collapse.

Somtimes I just wish shit would hit the fan already so all these people who cry gun reform will get a rude awakening. This is horrible and will save no ones life.

A while back in Wisconsin, there was a sheriff, the county had a ordnance that forbid firearms in a park. However, state law clearly said, no local firearm law can be more restrictive than state law. One of our guys went there and sat down with his gun. The sheriff showed up and detained and ticketed him. Next day a dozen armed people went to the park. Sheriff came again and said he would arrest all. He was told straight out, we will have 100 armed people in this park tomorrow. The sheriff made a few threats but finally backed down about arresting everyone. But he said he will enforce the ordnance because he didn’t give a damn about what state law says. Next day that sheriff got a phone call from the state attorney. He was schooled on the law. That ordnance was removed from the books. We don’t mess around in this state. Our group has faced off with the police several times. Our big guy, about 6’6" and over 300 pounds will sit right down and has had several weapons pointed at him. Here’s one, it all starts about 11:30 https://www.youtube.com/watch?v=xrrgVkAms98

That is what I love hearing!!!

At this rate we are going to lose our gun rights. The supreme court should be stepping in , without any support from them the liberal states will keep this up and win. Voting dosnt mean shit anymore with our country full of illegals and zombies rising to vote. Untail they buckle down on voter fraud and really try to counter this anti-culture movement the far left will continue to gain ground.

The time of being silent is long past. We try to be proactive. Watch for bills in state and local areas. Anything comes up we show up and make a lot of noise. We have stopped several assault weapon ban bills. Stop it before it becomes law, it’s much easier. Show up at town hall meetings, speak to your reps. Even if you’re one person, stand up. Wisconsin was the 49th state to get legal conceal carry. It was a major battle for us and included an attempted state wide recall election pushed by the liberal left. It was an utter fail for them. Get involved at your state and local level, or you will lose what we have.

Wont do anything , they are allowed to keep pushing instead of being forced to back off. There is no consequences for their bullshit so they can just keep coming at our rights and have no reason to stop. They gain ground while we compromise. We fight for tiny improvements while they go for full on bans and they get what they want more then us. They dont need votes when a majority of our government/swamp seems to be ok with trashing the 2A.

There must be zero drugs in Deerfield because they’re banned too.

Deerfield is in the northwest suburbs of Chicago. It is a nice town. Never heard their having any AR15’s used against the public there.

Since when has Chicagoland ever been gun friendly? Anyone know what a FOID card is? Firearm Owners ID card. The government there wants to know who all the gun owners are so they can come knocking when it is time.

Yeah, and it is not doing them any good to be anti-gun. They have horrible crime rates, especially gun-related crimes (particularly in the city of Chicago). (Although, Deerfield probably has a low crime rate - already.)

The Chicagoland solution to gun crimes - disarm the citizens (which of course, makes it easier for the criminals to run the place).

Liberals, Conservatives, the Right, the Left, I don’t trust any of them. They all piss on the 2A. Both Republicans and Democrats have similar track records. Politicians will always be politicians, and like that bastard Mao said: ‘power comes from the barrel of a gun’. Well, maybe it’s time we’d show our teeth…

They all have their faults, for sure. But, the conservatives, the Right, the Republicans, call them what you will, have a better overall track record for gun freedom (that is, lack of gun control laws, or at least, less restrictive), than the liberals/democrats/the Left.

True, at this point both are anti-gun but only one side is very open about saying it. Most of he republicans are all for an awb while democrats want all guns, either way f**k them both.

About 50% of the right supports another AWB, the right dosnt give a shit about our rights, its just a party line to them. When we see a push for more pro gun bills and less compromising away our rights I will believe an elephant cares more then a donkey. 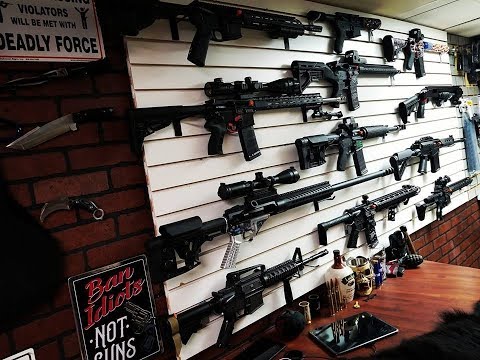 The Deerfield Illinois gun ban is set to take effect on June 13th 2018 Join us every Thursday night at 6pm central time for our weekly update on the state of affairs. Who knows what we will do this week. Be sure to

Let’s be real. Some states are a lost cause until they outlaw liberalism / socialism. Which isn’t going to happen. We will be leaving Texas in a few years and saying good riddance to the illegal and Californian/liberal scourge infiltrating our way of life here (among other reasons).

All of this bullshit from the left AND the right has probably created more libertarians (which we are). And that’s a good thing. We need more people fed up with the political establishment on both sides and vote all of these mother fuckers who aren’t real 2A and or bill of rights supporters the hell out. Something the average American and maybe some of our fellow 2A community members may not know is you can just as easily have an anti-gun republican as you can a pro-2A democrat. Both are not the norm but both do occur. So without due diligence on our part before voting we could make it worse. The republicans are trying VERY hard to not be seen as the “old racist white guys” party and are slowly caving in and relinquishing their principals.

Ok my long winded reply is over.