Yup. Not a mechanic. But bolts are bolts, screws are screws, etc. So some simple stuff i should be able to handle.

Got one exhaust manifold leaking so probably a broken stud or two. New exhaust manifolds already ordered. Going with Banks because everything i see on it says the engine will be exhaling a lot better. 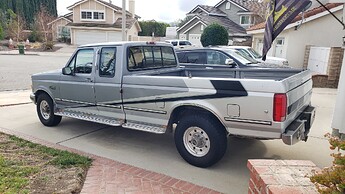 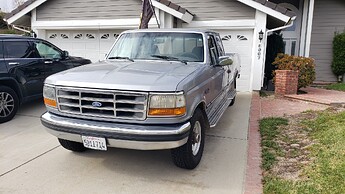 I took it to a mechanic for some fluid leaks (not equipped to handle myself at the moment). Got a new intake manifold gasket put in and a new trans pan gasket and trans mount put in. Brake master cylinder and booster replaced as well.

Thank you. I know I will need it.
Got liquid wrench so I can try and soak all the heavily rusted bolts for a few days before attempting to remove the unbroken ones.

I am hoping I can use the easy out type of extractors on the stud stumps. 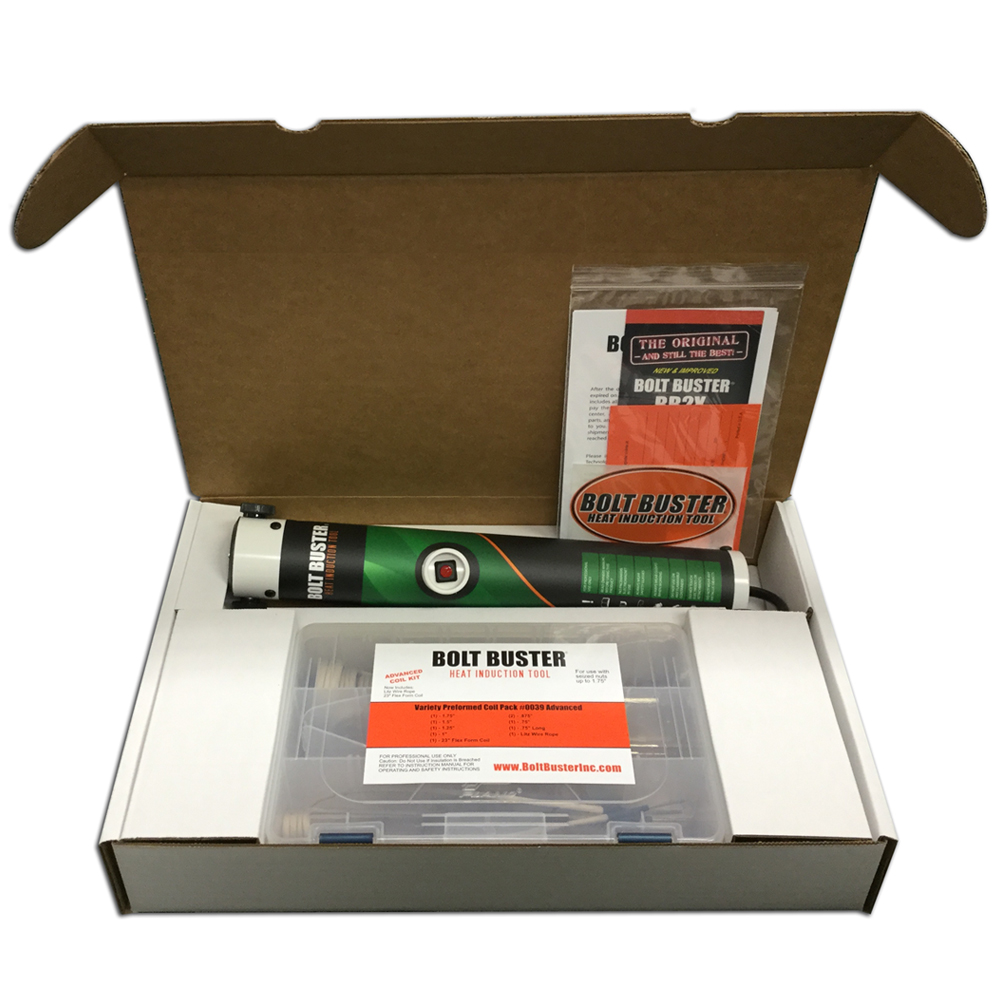 You’re putting a diesel in it?

I see what you did there.

That 460 is a great motor in front of a manual tranny, but put it in front of an auto with 411 differential and you can watch the needle on the gas gauge move! Had a couple, they have some zip.

Yup. I haven’t had a chance to see what the MPG is like, but I am thinking it is around 9-10 at the moment.

The gauge doesn’t read the front tank correctly and I have only switched it to rear to make sure it sends fuel and then switched back to the front.

Once I switch out the exhaust and take a look at the intake flow, and take care of the front gas tank / gauge issue i will see how much it eats

If you are not familiar with the older Ford dual tank system it uses fuel pressure from the tank pump to switch the valve, there is a pump in ea tank plus in-line pump, so it is possible to burn out the pump by switching back to a mostly empty tank. The tank pump turns on in the mostly empty tank, but does not have enough pressure to switch the valve so the engine continues to draw fuel from the other tank, (the in-line pump is strong enough to draw from the tank without the tank pump running). That’s how both of mine worked anyway, 88 and 97. Learned the hard way of course!

Yes, and the fuel is delivered at a really high pressure, and then regulated down. As mine ran on the inline pump, the only value of the tank pumps was to switch the valve. When I discovered the tank pump was burned out, I had filled up both tanks but which ever way I put the tank selector switch, it drew from the front tank. (Even though the fuel gauge read from the correct tank) Before dropping the tank and replacing the pump I partially disassembled and manually pushed the diaphragm in the valve back to draw from the rear tank so I could use up the fuel, and it emptied the tank down to very little fuel without aid of the in-tank pump.

without aid of the in-tank pump.

And yet some engineer earned his pay by adding it in

My thinking is all tanks since the late 80’s are set up to have a pump inside. Engineers thought “Why not use that pressure to switch a valve” Just like using manifold vacuum to move vents. Older two tank systems had a valve lever somewhere under the seat if I remember correctly, and the dash switch only switched the fuel gauge sending units. Maybe that was Chevy. Been a long time since I wrenched on old trucks, other then the Lightning Killer.

I will do some checking but it looked to me like a bad fuel gauge sending unit.

I got the truck and left the tank switch on front tank. The guage was showing about 3/8 of the tank of fuel.

On the way back, as the truck was going downhill or uphill the gauge was showing either really close to empty or back to 3/8 of the tank.

When i reached the closest to home gas station I pumped gas into both tanks until the pump shut off in each.

8 gallons in the front and 2 in the rear.

Checked the gauge. Front 3/8 of the tank, Rear Full.

By the way, had to have it smog checked before registering. Here are the numbers: 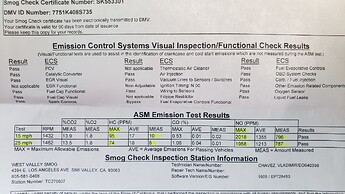 really close to empty or back to 3/8 of the tank.

Pretty typical. Maybe run on one tank only, then see if that’s the one that takes a fill. Repeat with the other one. It’s a pain to drop a tank, but easier if empty.
Not sure exactly what the numbers mean on the emissions, but it passed, that’s good. Doesn’t look like anything has been disconnected.
You can also send a sample of the oil in to Blackstone Laboratories they will give you a real comprehensive report. I use to do it with the Madman.

My Banks exhaust bundle is in the works. For now I have been trying to get the doors aligned. Both sagged a bit. Driver side was really bad.

Replaced the hinge pins and bushings as well as the striker bolt bushing. Will go right now and move the whole door up about 1/4"

Then repeat on the passenger side.

My thinking is all tanks since the late 80’s are set up to have a pump inside. Engineers thought “Why not use that pressure to switch a valve” Just like using manifold vacuum to move vents. Older two tank systems had a valve lever somewhere under the seat if I remember correctly, and the dash switch only switched the fuel gauge sending units. Maybe that was Chevy. Been a long time since I wrenched on old trucks, other then the Lightning Killer.

1985 F250 diesel with the dual tank system didn’t have a manual valve, just the switch on the dash, which switched the gauge to the correct tank and switched the valve (very fuzzy memory says it had a solenoid on the valve, but my memory may be off).

No electric pumps on that system, either.

Biggest drawback I saw in that system, was that the aftermarket offered a 38 gallon tank to replace the rear 19 gallon tank, but you were stuck with the front 19 gallon tank. I think somewhere around the 1988 model was where the aftermarket started offering a larger front tank. Driving a steady 55mph, the 19 gallon front tank and 38 gallon rear tank gave it (the diesel with manual transmission) a range just over 1,000 miles between fill ups.

The 85 gassers had electric in-tank pumps, apparently diesels didn’t. For sure my 88 didn’t have any wiring going to the valve, I took it out to switch it to the back tank to run out the fuel before dropping the tank and replacing the pump. Looked up a schematic, the “Valve” I was referring to was called a “Dual Function Reservoir” on my 88. Later looks like they did away with it, put reservoirs in the tanks, so memory probably wrong about my 97.

Removed the exhaust pipes including the cat. Cat is in the garage so not shown here. The internals look intact so may be able to reuse. 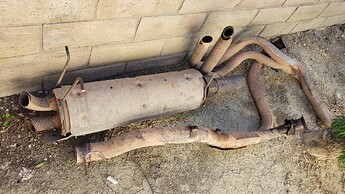 Snapped one stud on the driver side manifold and still can’t get the EGR line disconnected. Will try air hammer next to turn the nut off.
So this makes 2 studs that need to be extracted on driver side. 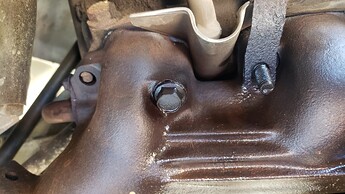 The rest of the studs came out whole, however 2 of them had issues with threads so I may have botched the hole threads while removing. Will try chasing them with a tap and if too messed up will be going with inserts. 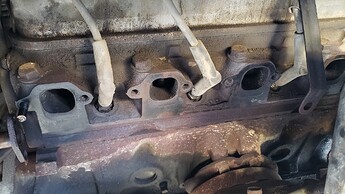 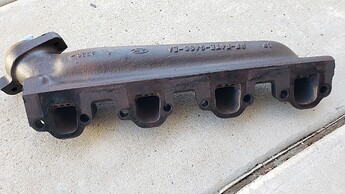 The bottom one came out with 3/8" wrench without a fuss.

On the driver side the air injection line was a PITA but unscrewed eventually. The EGR line, as mentioned above is not budging. Haven’t tried heat yet though and like I said maybe will give air hammer a go.

P.S. broke a few vaccum lines while moving the vaccum reservoir off the fender. They were super crispy. Need recommendations for which hose to get for that. They were the 4mm plastic ones, multicolored. Found another one that was busted (previously) to the HVAC control and the larger hose between two two-chamber “cans” ( I think I saw someone refer to them as charcoal cans).