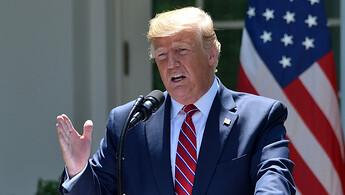 WASHINGTON, D.C.—The impeachment hearings have been thrown into chaos after President Trump announced that he supports impeachment, forcing Democrats to oppose their own impeachment inquiry.

“Impeachment? I’m for it. Great idea. Best idea, maybe ever,” he said, adding that he’s “getting kinda sick of all this winning anyway.”

“Sure, why not. Impeach me. I love it. Whatever. Now I’m gonna go watch Joker again. Great film. What’s that guy’s name? Phoenix something. Bob Phoenix, that’s it. Tremendous actor—absolutely perfect.”

Democrats quickly condemned his statements. Pelosi said, “It’s clear that Trump wants to be impeached because he’s not good at being president. Well, we’re going to show him a thing or two by forcing him to stay in the White House and finish out his term.”

“And Joker is alt-right propaganda,” she said, falling for Trump’s ploy to make Dems condemn one of the most successful, beloved films of the year.

One pundit on CNN suggested that Trump is supporting impeachment at the request of Putin or the guy from Ukraine or “whichever conspiracy thing we’re pushing this month, I forget.”

At publishing time, Democrats had also withdrawn from the 2020 race to teach Trump a lesson.