As a beginner I found it difficult to constantly keep the four NRA rules of gun safety in mind. I showed my carry gun to some friends in California, and to avoid intimidating them I simplified it to two main rules:

I think this helped them be a little less scared.

that’s way off from my two rules

ultimately the first rule should always be, treat a firearm as if it is loaded - period.
all other rules fall into place with the above

So I just told them the “always-on” rules.

ultimately the first rule should always be, treat a firearm as if it is loaded - period.

I agree 110% percent. And being the NRA was mentioned in the OP I would like to add

Maybe I can preface the rules with that as the underlying philosophy: “Never assume the gun is safe. Check.” But then even after checking, we still treat it carefully, so it doesn’t work completely.

Then how do you dry-fire

you dry fire a unloaded gun
even unloaded you treat as loaded
first and always - when you pick up a firearm you will treated as loaded and than prove to yourself it is unloaded.
Many computer screens, walls, ceilings etc have been shot by unloaded firearms…

I think they all are equally important. A friend of mine ( seriously I’m not talking about me… it was a friend.) was handed a bolt rifle by his son in law. He believed it to be unloaded but treated it like it was loaded. He opened the bolt to confirm and then closed the bolt. Intending then to dry fire it he pointed it away from everyone and down toward the floor. After the big boom he had a nice round hole in his floor.
Even “confirming” it was empty he then inadvertently chambered a round. But believing it to be safe he still pointed it in a safe direction before pulling the trigger.

Basically all the rules need to be followed because no matter how sure you are, you may still be wrong. You can get by breaking any one rule but breaking two can get someone killed.

New rule of gun safety:
Make sure your loaded taser is not a loaded Glock

Looks like Aaron Cowan of Sage Dynamics has a few caveats about how the Four Rules are worded, too. He didn’t explicitly address dry-fire, but he did mention about not wanting to shoot the floor or his couch. 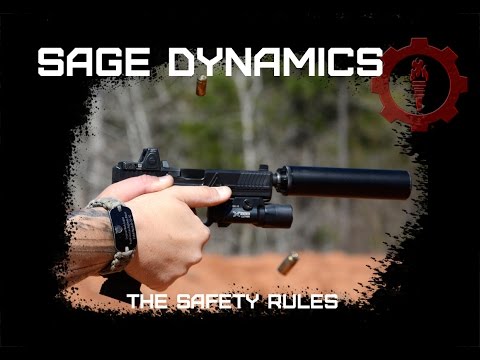 Towards the end, he says, "My number one safety rule (and I wish it would be the only safety rule, but context is important, so we have more) is ‘All safe actions, if they make sense, are acceptable.’ "

Maybe not for noobs, but this guy Abner Miranda also has reservations about the NRA rules: “Stop. Listening. To. The polite. Gunfighting rules. Of the NRA.”

He seems to say that we should resign ourselves to reality that in a real fight we are going to muzzle each other, but we should “muzzle as responsibly as we can.” 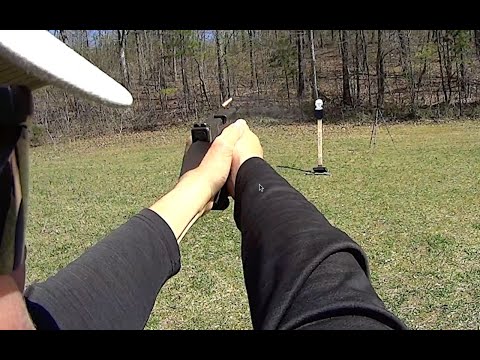 In a real fight, pretty much everyone is potentially being muzzled anyway. This is why trigger control is so important, in a fire/gunfight or “active shooter situation” you can count on muzzling someone if for no other reason, all targets are not clearly seen or identified.

Abner Miranda also has reservations about the NRA rules: “Stop. Listening. To. The polite. Gunfighting rules. Of the NRA.”

FWIW, I only watched the first 5 minutes and change.

I’m not so certain the NRA has gunfighting rules but they do have rules for the range. If someone is going to endanger me by breaking the safety rules while at the range and not being under fire they’re not gong to be at the range for long. I’ll leave first rather than confront a potential nutcase with a firearm, but I’ll also be right on the phone to range officials.

Yet another rule for the range. When it comes to a gunfight there are no hard and fast rules.

edit: maybe there are rules for a gunfight…

Don’t shoot yourself or get shot by the BG.
Don’t shoot a friendly.
By all means shoot the BG in lethal places and give no quarter, as long as he’s a threat keep shooting.

maybe there are rules for a gunfight… 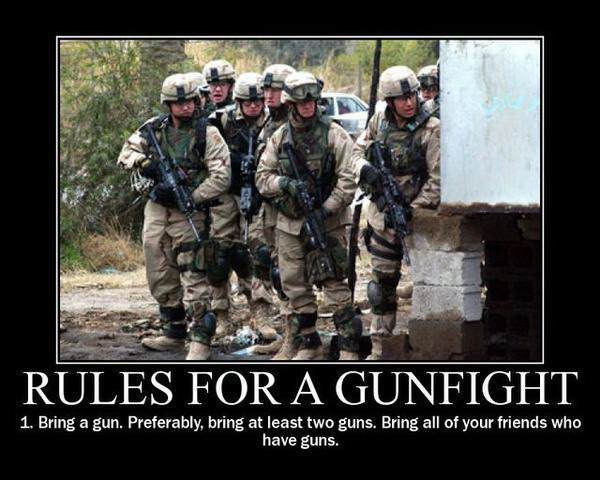 I think of how many times I have had a barrel pointed it me during my military career.
Big thing was the finger and trigger never really where it was pointed.